Sambava, Madagascar — Madagascar has always been one of the best places on Earth to study the natural world. Seventy percent of its species are found nowhere else — the largest concentration of endemic wildlife anywhere. In the last 10 years alone, scientists have discovered 40 new mammals, 69 amphibians, 61 reptiles, 42 invertebrates and 385 plants in the country. Its parks are ecotourism destinations and points of national pride.

With the world’s largest concentration of endangered species, Madagascar is also a leading place to study extinction. Last year the country lost the greatest percentage of primary forest, making it one of the most deforested places on Earth. Since 2012 the International Union for Conservation of Nature has named lemurs, which are found only in Madagascar, as the world’s most endangered group of animals, with 95 percent either threatened or endangered.

Poaching, farming, charcoal cultivation and illegal logging have placed enormous pressure on the country’s wildlife. The next looming danger is climate change; in Madagascar and across the world, warming temperatures threaten to push wildlife out of the conservation areas created to protect it. The land that was set aside yesterday might not be right for tomorrow, requiring scientists to think outside traditional park borders.

“Parks and large tracts of land are the core of how we save stuff,” said Timothy Male, the executive director of a Washington, D.C., think tank called the Environmental Policy Innovation Center. But, he added, small, local parks “tend to be where a lot of dynamism happens.”

Thinking outside the box 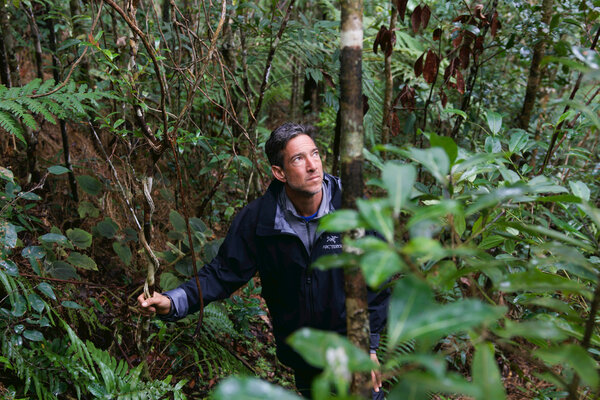 The Sambava region of northern Madagascar is home to both sprawling national parks and a growing network of locally run reserves. For decades many forests were protected simply by their hillsides, seemingly too steep to farm. But in the last five years, prices for vanilla, which thrives on slopes, have increased tenfold to $300 per pound, prompting a rush for hillside land.

Erik Patel, a primatologist with Lemur Conservation International, and Desiré Rabary, a manager in the organization, are trying to document how many lemurs remain in the region and where they are, sometimes one animal at a time. In August 2019, they planned an expedition to Antohakalava, a privately owned park just twice the size of Central Park in New York. Dr. Patel had heard that it held three critically endangered lemur species.

“These animals are really sensitive,” Dr. Patel said. “If you can protect them where they’re at, there are a lot of advantages to doing so.”

Dr. Patel once dreamed of studying the great apes of Africa, as Jane Goodall or Frans de Waal did, but he got hooked on lemurs in the late 1990s and has worked in Madagascar ever since.

Mr. Rabary is an accomplished conservationist, biologist and guide. Originally a pig farmer, he cobbled together a 45-acre reserve in his own backyard, buying a few acres at a time over two decades.

Both said that the most important questions in conservation today lie outside the large protected areas like nearby Makira Natural Park, a rainforest larger than Yosemite National Park. Although these are crucial refuges, Dr. Patel said, half of the remaining rare lemurs, including the silky sifaka, indri and ruffed lemur, eke out their survival in smaller, less pristine places. As habitats shift with the climate, these marginal populations may become just as important to species survival as those in the large parks.

Dr. Male, of the Environmental Policy Innovation Center, pointed to the example of the Karner blue butterfly, which once spanned the United States but has since dwindled to two tiny populations in New England and Wisconsin. In an effort to save the species, biologists focused on the larger Wisconsin population and for many years largely left the tiny New England one alone. Instead of dying out, the tiny population has thrived.

“Who knew?” Dr. Male said. “And the population in New Hampshire is on an airport. It’s literally, like, the end of a runway.”

Dr. Patel is hoping that the lemurs of northern Madagascar might persist similarly, in small groups and preserving their genetic diversity against the odds.

But the odds are worsening. At a glance, Madagascar seems to be fending off extinction rates with the help of its national parks, which have drawn a steadily increasing flow of tourists in years before the pandemic. But a 2019 paper in Nature Climate Change suggested that the good fortune may not last.

The Nature study concluded that, as the climate warms, the ideal habitat of the critically endangered ruffed lemur will most likely shift outside current park boundaries in the next 50 years, into areas already devastated by slash-and-burn agriculture. Squeezed between climate change and deforestation, as much as 83 percent of ruffed lemur habitat may disappear.

“It doesn’t paint the most optimistic picture of what happens outside of protected areas,” said Charles Golden, a biologist with the Harvard T.H. Chan School of Public Health and an author on the study. The conclusion “essentially assumes that all of that land will become unsuitable for this kind of rich biodiversity.”

Of course, computer models don’t account for human innovation, or for a species’ potential resilience. Tiny pockets of habitat may be the key to saving not just lemurs but also threatened animals everywhere.

The hike to Antohakalava takes three days and winds through villages and rice and vanilla farms. From a distance the land looks forested and green, an untapped wilderness for lemurs. Up close, the trees are mostly stunted, overrun by tangled weeds and invasive shrubs and grasses. Where massive forests once stood, the land has been clear-cut for fields or charcoal.

The forest of Antohakalava, in contrast, is a refuge, the hillsides thick with towering ramy trees and ebony, draped with bromeliads and mosses. Spiders, lizards, birds and frogs are everywhere. Within minutes of making camp, a distant hoot stirred Mr. Rabary to grin. “That’s a roughed lemur,” he said.

In the arid south, brown or ringed lemurs can scamper for miles on the ground; in Antohakalava, the species are largely arboreal and stay high up in the trees, safe from a catlike predator called the foosa. As a result, the lemurs cannot easily cross farmed fields to mingle and mate with other populations. And two of the three endangered species reported to live here — silky sifakas and indris — are not easy to transplant and cannot survive in zoos.

They would either survive here or nowhere. But first Dr. Patel and Mr. Rabary had to find them.

“We’ll probably hear them before we see them,” Dr. Patel said, while walking the hills. “These aren’t habituated animals; they’re not used to hanging out near humans.”

Silky sifakas are picky about their habitat, but Dr. Patel said he had been surprised by where they can survive. The previous year he found sifakas occupying narrow strips of trees right next to farms. By comparison, Antohakalava was a lemur paradise.

The owner of Antohakalava is a burly vanilla broker named Ratombo Jaona. Mr. Ratombo bought the land a decade earlier for vanilla plantations but quickly learned that cutting primary forest so close to Makira might attract unwanted government attention. Instead, he considered ecotourism.

Few people were willing to walk three days to see timid lemurs, he realized, but if he could interest scientists like Dr. Patel, it might cover the cost of his park rangers. Dr. Patel gladly pays to do research in the park and hires local porters, hoping to form a relationship that could show Mr. Ratombo and other landowners that lemurs are worth protecting.

Unlike anywhere else in the region, Mr. Ratombo’s park does not have problems with poaching; local bushmeat trappers are afraid of crossing the man who buys their vanilla. A similar dynamic plays out in many developing countries: Poachers often feel more at ease hunting in large parks sponsored by foreign nongovernmental organizations or managed by lackluster governments than on land owned by powerful neighbors.

“Private land is better for the future of lemur conservation,” Jonah Ratsimbazafy, president of an N.G.O. called the Madagascar Primate Research Group and a leading lemur expert in the country, wrote in an email. “The state has not enough money to pay the staff, there’s no strict rules and law enforcement, bad management and … corruption.”

Mr. Ratombo’s father was a clergyman, and the park is peppered with Bible quotes about the garden of Eden and the force of God’s might. Mr. Ratombo said that God had instructed him to build the preserve after he learned he could not grow vanilla. But he still needed a return on his investment.

“That story — some version of that story — is part of just about every conservation success that I know of,” Dr. Male said. “It’s landowners who didn’t start with conservation in their hearts, who find this path to conservation — find the path and make money off it.”

A sliver of hope in the treetops

On the third day of surveys, one of the guides on the expedition froze as two orange masses streaked overhead. The biologists followed, crashing through the trees until coming to a stop. Seventy feet overhead, three ruffed lemurs, whose population has plummeted to just a few thousand in recent years, sunned themselves in the canopy. Among them was a white morph, a strange variant that Dr. Patel said has never been studied in the wild.

The biologists stayed in the park for another 50 days, marking the borders of the forest with GPS and searching for silky sifakas and indris. They found teeth marks left by silky sifakas, saw indris and collected fecal samples from the ruffed lemurs, including one from the white morph — a first for science.

When the pandemic hit, Madagascar isolated itself from all travel and tourism; it began reopening in September. Dr. Golden, of Harvard, worried that people may have since moved into the forest to avoid Covid-19 and begun living off bushmeat. Dr. Ratsimbazafy said he had seen an increase in slash-and-burn farming.

But long after the pandemic is done, climate change will continue to threaten endangered species, and places like Madagascar will need small private parks, created by local people, to support the bigger public ones.

“I can’t even think of another forest that has all three critically endangered lemurs,” Dr. Patel said, referring to Antohakalava. “We’ve seen a lot of benefits from these small, private parks that are kind of filling in the gaps. These are people that seem to really want to protect land. And it seems to be a model that’s growing.”