Home » Science » In the event of a killer asteroid, volcanic apocalypse, or nuclear holocaust, mushrooms could save humanity from extinction

About 66 million years ago, an asteroid plummeted through Earth’s atmosphere and crashed into the sea floor, creating an explosion over 6,500 times more powerful than the nuclear bomb the US dropped on Hiroshima.

The impact sent clouds of debris and sulfur into Earth’s atmosphere, blocking the sun’s light and warmth for about two years. Photosynthesis ground to a halt, which meant no more plant growth. The surviving dinosaurs starved to extinction.

But fossil records show that fungi thrived in the aftermath.

According to science journalist and TIME editorBryan Walsh, that makes mushrooms crucial for human survival if such an apocalyptic event were to occur in the future.

Walsh’s new book ,”End Times,” examines how catastrophic events, both natural and human-made, threaten our existence. In it, he points out that three types of potential catastrophes — asteroid impacts, supervolcano eruptions, and nuclear war — all have one thing in common: they could wind up blocking the sunlight needed to feed plants.

“Blot out the sun, and even the best-prepared survivalist, a master of the wilderness, will starve to death along with everyone else,” Walsh writes in the book.

In order to survive, he says, people would need to adopt sunlight-free agriculture — cultivating mushrooms, rats, and insects.

Asteroids, supervolcanoes, and nuclear wars could block the sun 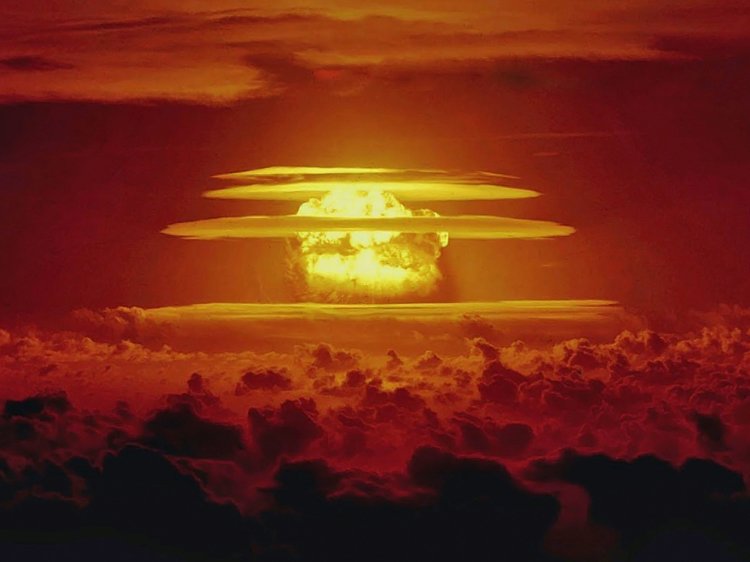 The mushroom cloud of the Castle Bravo nuclear test on March 1, 1954.NOAA

Research suggests the consequences of supervolcano eruptions and nuclear bombs could be similar to the aftermath of the asteroid that doomed the dinosaurs.

About 74,000 years ago, for example, the Toba supervolcano eruption sent clouds of sulfur dioxide into the atmosphere, cutting sunlight by as much as 90%. That volcanic winter might have reduced the global human population to just 3,000 people, based on oneanalysis.

If enough nuclear bombs (thousands of them) were to explode, that could also bring on a nuclear winter that would reduce sunlight levels by more than 90%, according to a 1983 paper co-authored by Carl Sagan. Global temperatures could drop up to 45 degrees Fahrenheit in that scenario.

“Such rapid and drastic cooling could make farming impossible, even in those regions spared by the missiles,” Walsh writes. 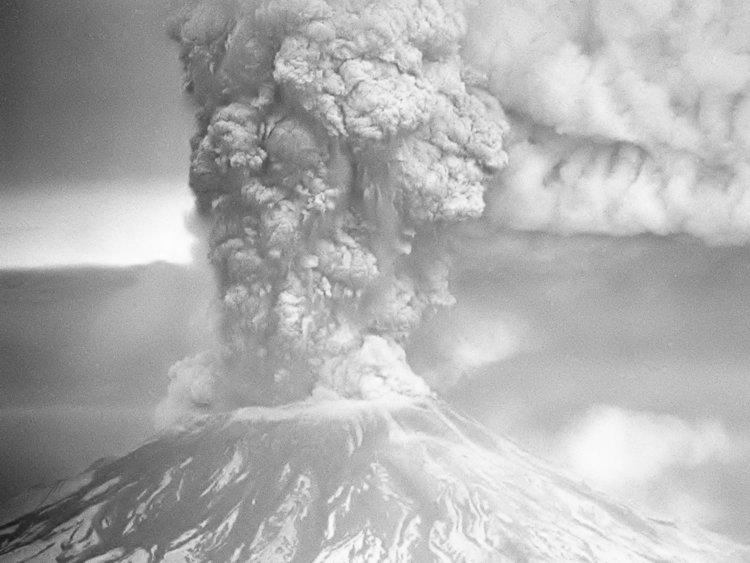 Without sunlight, in other words, our food system would break down.

The mushroom cultivation solution in Walsh’s book comes from David Denkenberger, a civil engineer who suggested it in a 2014 book about post-apocalyptic agriculture, called ” Feeding Everyone No Matter What.”

“Maybe when humans go extinct the world will be ruled by fungi again,” Denkenberger told Walsh. “Why don’t we just eat the mushrooms and not go extinct?”

Mushrooms do grow on trees, with or without the sun 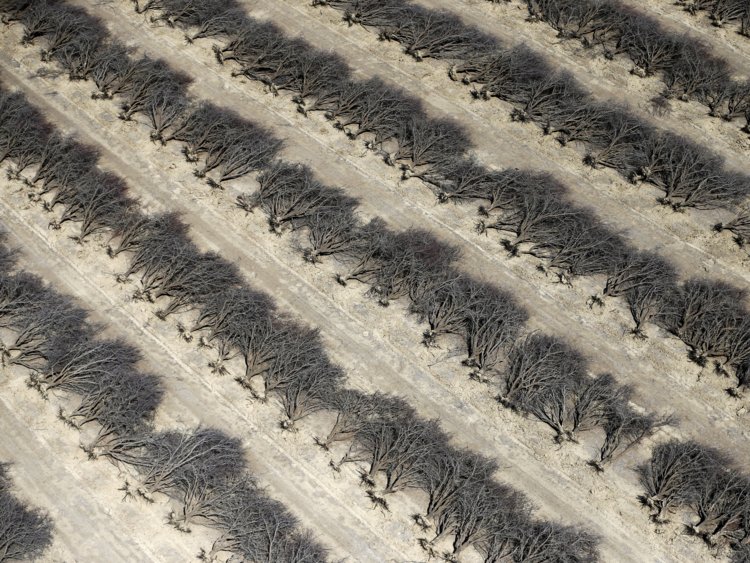 A field of dead almond trees after a drought is seen in California’s Central Valley, May 6, 2015.Lucy Nicholson/REUTERS

If clouds of debris or ash were to blot out the sun and lead the climate to cool rapidly, trillions of trees would die. Humans wouldn’t be able to digest that dead wood, of course, but mushrooms could — no photosynthesis required.

Walsh does the math: A 3-foot-long, 4-inch-wide log should produce 2.2 pounds of mushrooms in four years, by his calculations.

That doesn’t sound like a lot, but with a small post-disaster population and efficient fungus production, Denkenberger thinks it might work. 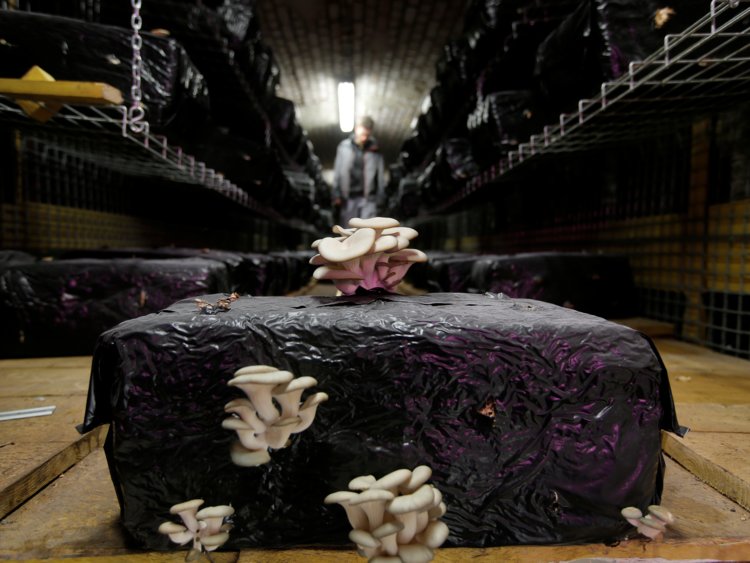 Oyster mushrooms grow from a substrate bloc at the “Bunker Comestible” (the “edible bunker”) in Strasbourg, France, February 19, 2018.Vincent Kessler/Reuters

While we’re using the wood to grow mushrooms, we could use the dead trees’ leaves, too, he said.

“The ground-up leaves could be made into tea to provide missing nutrients like vitamin C, or fed to ruminant animals like cows or rats,” Denkenberger told Walsh.

Dead trees can feed other life forms, like rats and insects

Rats, much like mushrooms, can digest cellulose, the sugar that makes up 50% of wood. So anything the mushrooms leave behind could be fed to the rats, Walsh suggests. That way, any human survivors could eat meat. 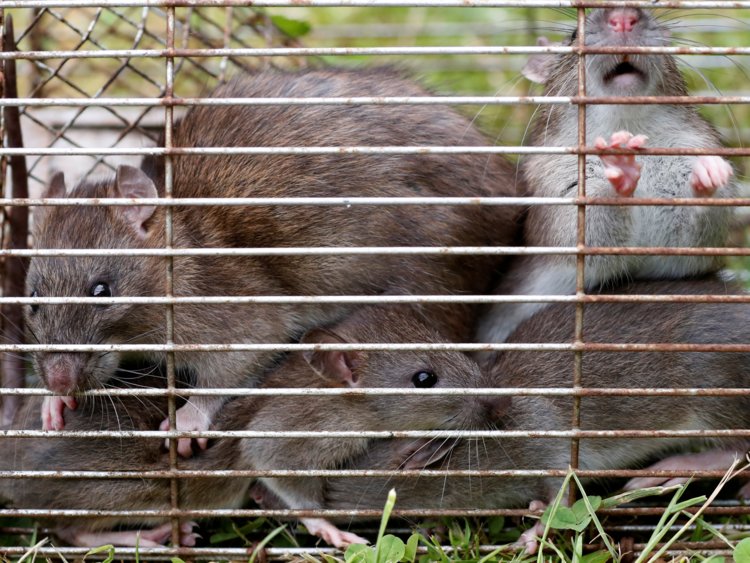 Rats are trapped in a cage in Vertou near Nantes, France, June 5, 2019.Stephane Mahe/Reuters

What’s more, rats reproduce quickly and they probably don’t need sunlight to do it, Walsh adds. It takes a rat just six weeks to reach sexual maturity, and from there only 70 days to produce seven to nine babies. In Denkenberger’s calculations, all of humanity could be eating rats after just two years.

Insects could also provide protein, and many of them would survive a sun-blotting catastrophe.

“The same qualities that make insects so abundant and so persistent would allow many species to weather even the most extensive, climate-changing existential catastrophes,” Walsh writes. “Beetles can feast on dead wood, and humans can feast on beetles.” 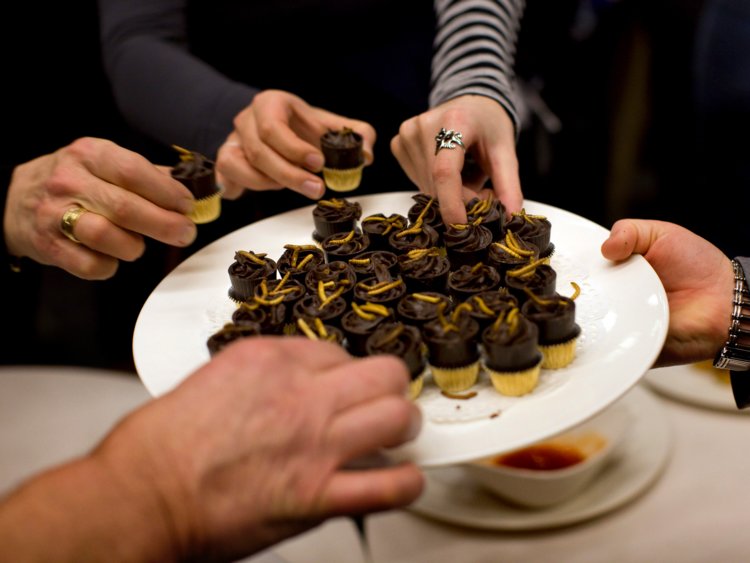 Insects are already a staple food in some parts of the world, and they’restarting to gain traction elsewhere. Walsh describes an insect food fair in Richmond, Virginia, where he tasted a pasta dish with ground cricket meatballs, called “Orthopteran Orzo,” and deep-fried mealworm larvae.

“They were both passable,” he writes. “If I were starving, though, I’d manage.”

Survivors would band together

Walsh’s book debunks another popular idea about how to feed ourselves during an apocalypse: cannibalism.

That would not help in the aftermath of a catastrophe that puts humans at risk of extinction, he says, because other people are simply not a sustainable food source. Walsh points to a 2017 study in which a group of undergraduate students calculated how long the human species would last if we subsisted on cannibalism alone. They found that only one person would remain after 1,149 days (about 3 years).

He adds, however, that building a new agricultural system would require working together. He thinks such collaboration would be likely in a disaster scenario. 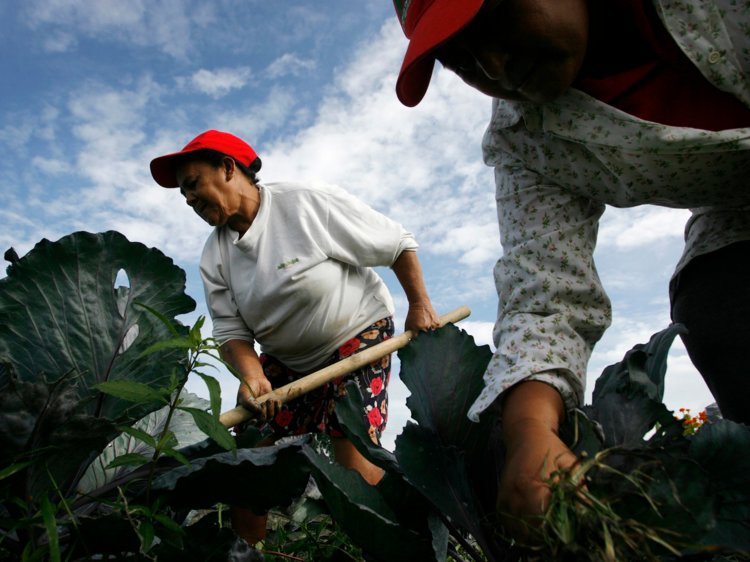 Women work in a cabbage field at the expropriated Fundo Aracal in the state of Yaracuy, Venezuela, August 27, 2007.Reuters

“For all our fear of what would come after, for all our bleak stories, collapse and conflict aren’t givens after a disaster,” Walsh writes. “Human beings help each other, including in those times when it doesn’t seem to be in their interest. That’s likely how Homo sapiens survived its closest brush with extinction — the Toba supereruption — and it’s the only way we would survive the next one.”