India is preparing to launch its ambitious Chandrayaan-2 mission today which is set to land near the currently unexplored south pole of the moon.

Thousands have gathered to witness India’s second attempt to send a landmark spacecraft to the Moon, a week after a fuel leak forced the launch to be postponed.

The fresh launch attempt for Chandrayaan-2 – Moon Chariot 2 – was scheduled for 2:43 pm (10:13 BST) and a successful take-off was confirmed by the nation via Twitter.

Indian scientists offered ritual prayers at temples near the base, according to media reports, and said they were confident there would be no repeat of the problem that led to countdown being halted 56 minutes before last week’s launch.

It is the Indian Space Research Organisation’s (ISRO) second lunar probe, and the first one destined to land on the moon, and is scheduled to land on September 6.

India will become only the fourth country, after the US, Russia and China, to reach Earth’s satellite if successful.

The ISRO has said it chose to explore the south pole as it is possible there is water in the permanently shadowed areas, which could pave the way for future lunar habitation. 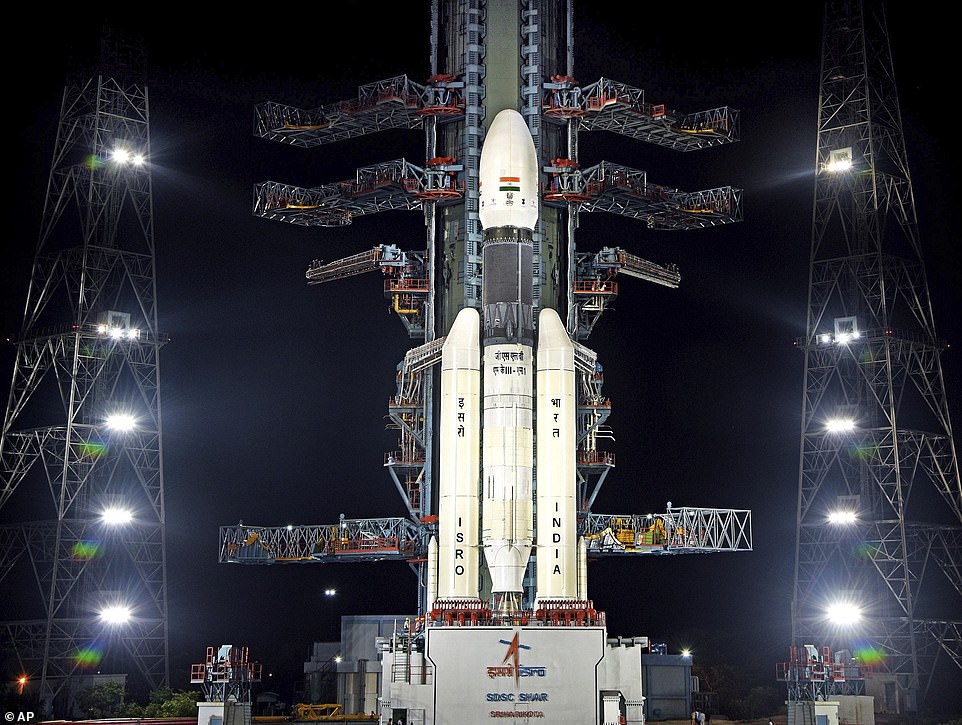 India is preparing to launch its ambitious Chandrayaan-2 mission today which is set to land near the currently unexplored south pole of the moon. Thousands have gathered to witness India’s second attempt to send a landmark spacecraft to the Moon (pictured,on the launch pad) 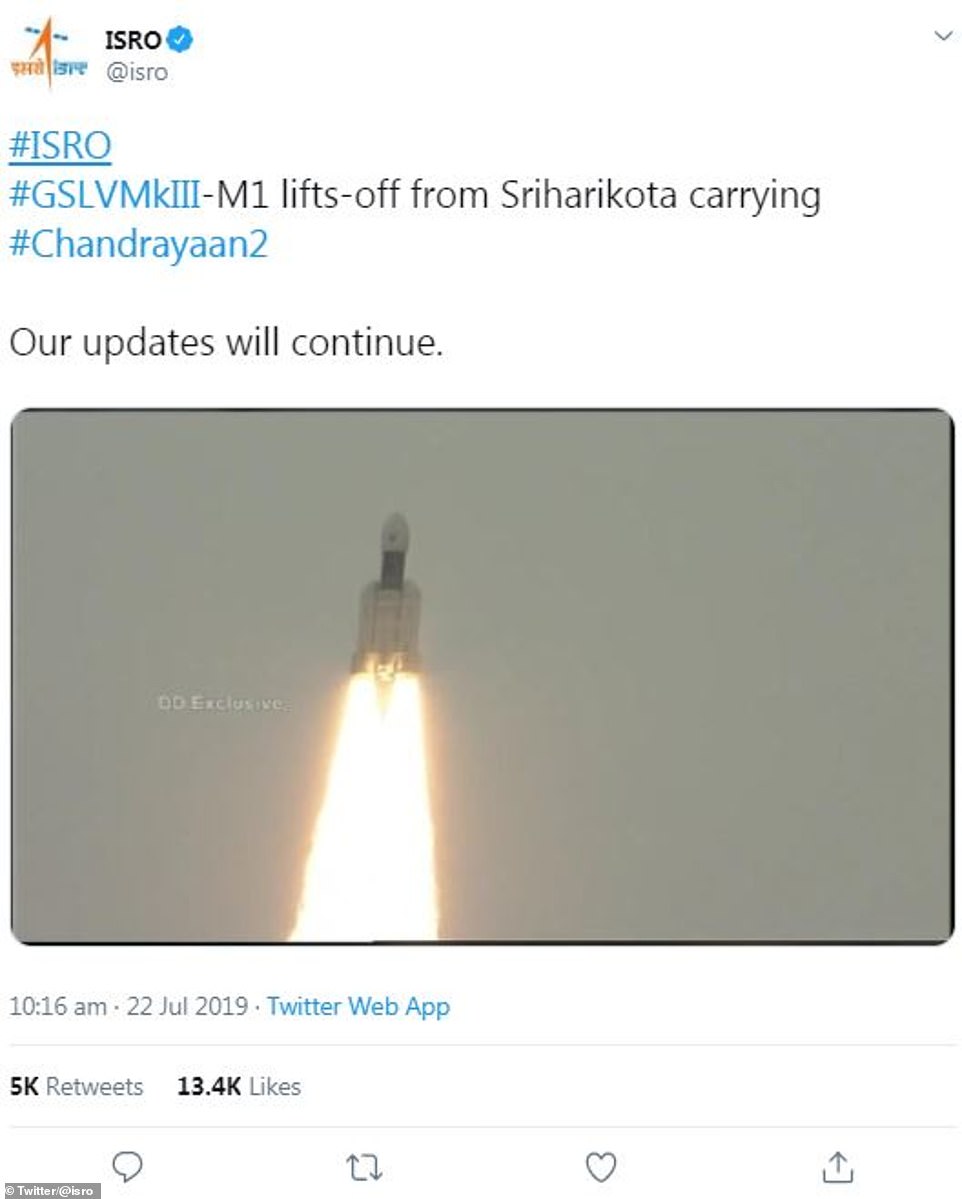 The fresh launch attempt for Chandrayaan-2 – Moon Chariot 2 – was scheduled for 2:43 pm (10:13 BST) and a successful take-of was confirmed by the nation via Twitter (pictured) 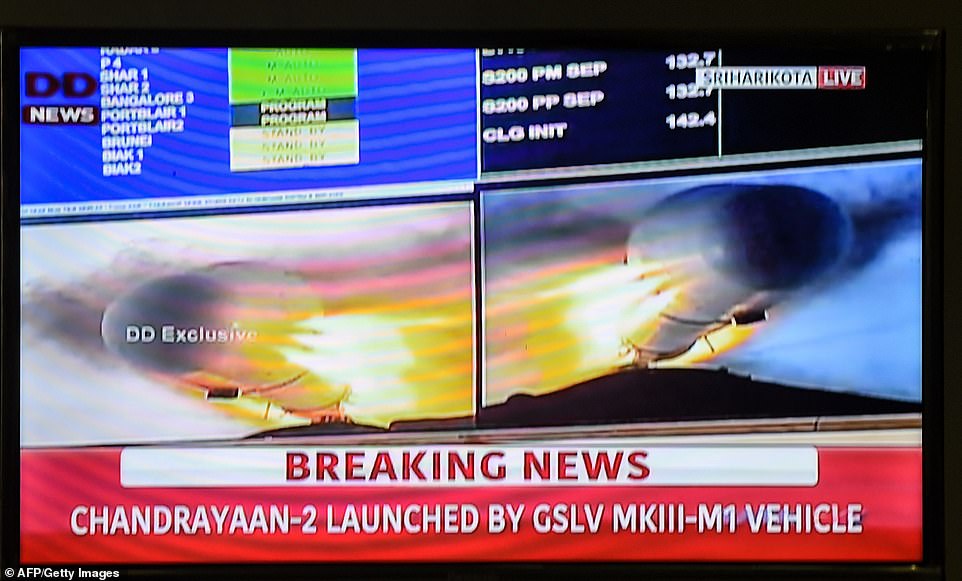 It is the Indian Space Research Organisation’s (ISRO) second lunar probe, and the first one destined to land on the moon, and is scheduled to land on September 6 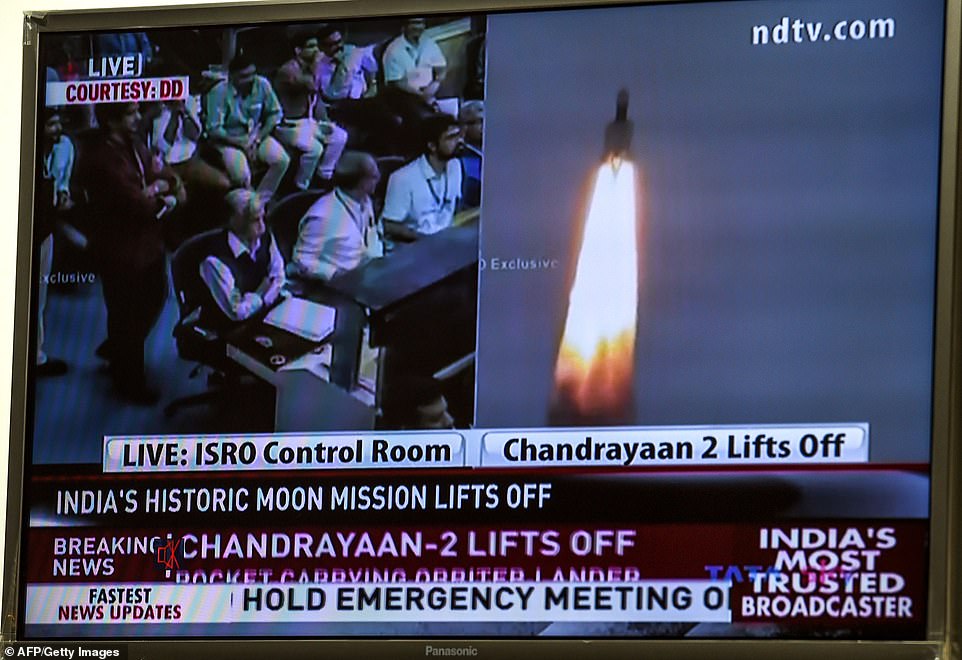 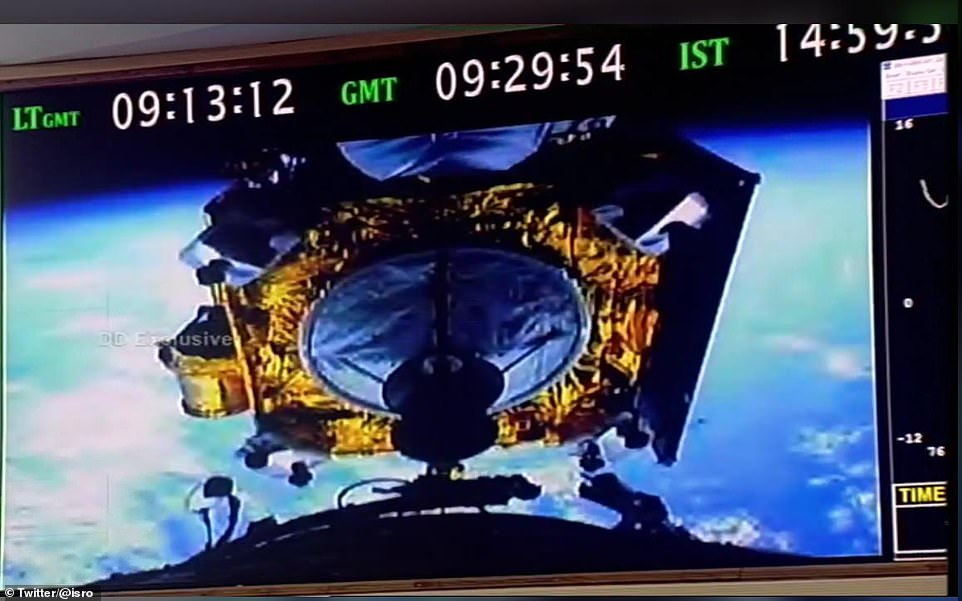 The GSLVMkIII-M1 rocket successfully injected Chandrayaan2 into Earth’s Orbit. pictured: When Chandrayaan-2 separated above the planet 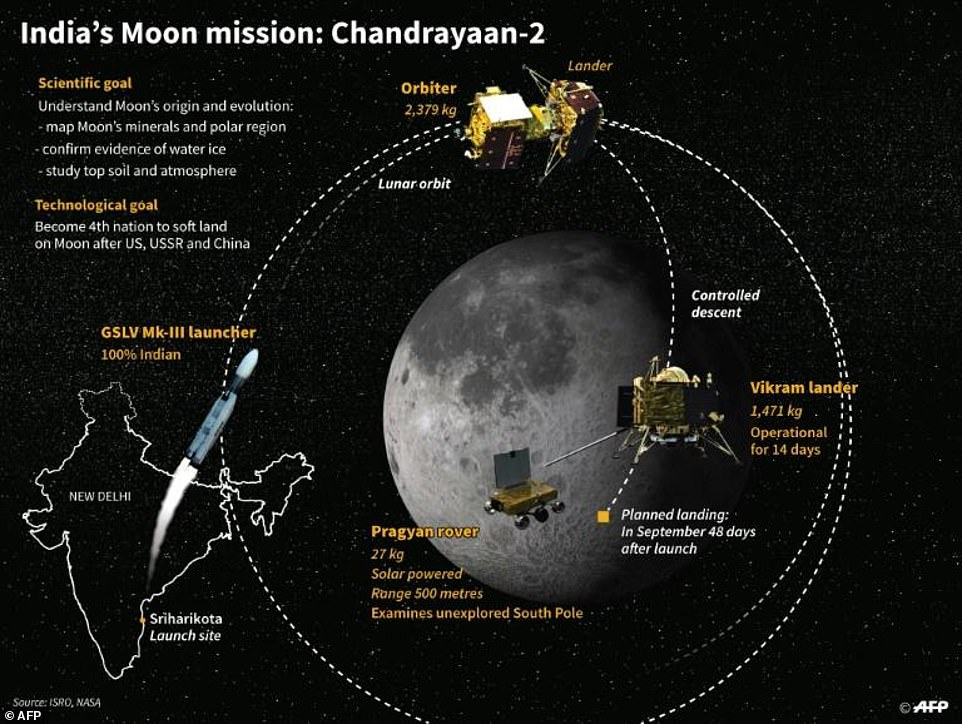 India’s Moon mission: Chandrayaan-2will be a ground-breaking mission to the south pole of the moon

Chandrayaan-2 is the Indian Space Research Organisation’s (ISRO) second lunar probe. It is comprised of three modules, an Orbiter, a Lander called Vikram, and a Rover called Pragyan.

The Orbiter will have a terrain mapping camera to help prepare 3D maps of the moon’s surface, an X-ray spectrometer looking for major elements including titanium and sodium, and another high resolution camera to help the other modules land safely.

Vikram will have an instrument to detect seismic activity on the moon, and a thermal probe that will examine the thermal conductivity of the lunar surface.

Pragyan will have an alpha particle X-ray spectrometer that examines the elemental composition of the surface and a laser induced breakdown spectroscope which looks at the abundance of various elements nearby.

The entire mission has cost around 10 billion rupees (£120million).

It also hopes to examine the inside of craters – which are cold traps – to get a greater understanding of the evolution of the moon.

These areas have stayed extremely cold for huge amounts of time and scientists believe it is likely they contain a fossil record of the early solar system.

Chandrayaan-2 has three modules, an Orbiter, a Lander called Vikram, and a Rover called Pragyan, which means ‘wisdom’ in Sanskrit.

Vikram, named after Dr Vikram A Sarabhai, the father of the Indian Space Programme, should land on a high plain between two craters, Manzinus C and Simpelius N, which are around 70° south.

From there, the six-wheeled robotic vehicle Pragyan will roll out and spend one lunar day, or a fortnight on Earth, carrying out scientific experiments on the surface.

ISRO hope topographical studies, mineralogical analyses and other experiments will help the world gain a better understanding of the moon’s origins.

Using solar energy to power itself, Pragyan will be able to communicate with the Lander, which in turn can send information to both the Indian Deep Space Network in Byalalu and the Orbiter.

With light rain falling on the Satish Dhawan Space Centre at Sriharikota, an island off the coast of southern Andhra Pradesh state, President Ram Nath Kovind joined 7,000 dignitaries and flag-waving school children waiting for the launch.

ISRO chief K. Sivan told The Hindu newspaper late Sunday that there was ‘no chance for any technical fault to arise now’.

‘When the technical fault happened, we stopped the countdown, identified the issue, and rectified it.’

The rocket will take up an orbiter, a lander and a rover, and has been almost entirely designed and made in India.

The 2.4-tonne (5,300-pound) orbiter is expected to circle the Moon for about one year, taking images of the surface, looking for signs of water, and studying the atmosphere.

The lander– named after Vikram A. Sarabhai, the father of India’s space programme – will carry the rover and be placed on the surface near the lunar South Pole.

ISRO scientists will remotely control the rover named Pragyaan – ‘wisdom’ in Sanskrit – as it carries out experiments.

It will work for one lunar day, the equivalent of 14 Earth days, studying rocks and soil on the Moon’s surface.

Experts said setbacks such as the halt to the first launch were to be expected because of the complexity of the mission.

‘In such an ambitious and prestigious mission like Chandrayaan, one cannot take a chance even if a small flaw is detected,’ Rajeswari Pillai Rajagopalan, head of space policy at the New Delhi think tank the Observer Research Foundation, told AFP.

‘We should keep in mind that space exploration is risky as many systems have failed in the past and many lives lost,’ he told AFP.

Aside from propelling India into rarefied company among spacefaring nations, Chandrayaan-2 also stands out because of its low cost.

About $140 million has been spent on preparations for the mission, a much smaller price tag compared with similar missions by other countries.

The United States — which is marking the 50th anniversary of Neil Armstrong becoming the first human on the Moon — spent the equivalent of more than $100 billion on its Apollo missions.

Chandrayaan-2, and India’s space programme as a whole, are a source of national pride.

Prime Minister Narendra Modi has vowed to send a manned mission into orbit by 2022, and India hopes to seek out commercial satellite and orbiting deals.

The new mission comes almost 11 years after the launch of India’s first lunar mission — Chandrayaan-1 — which orbited the Moon and searched for water. 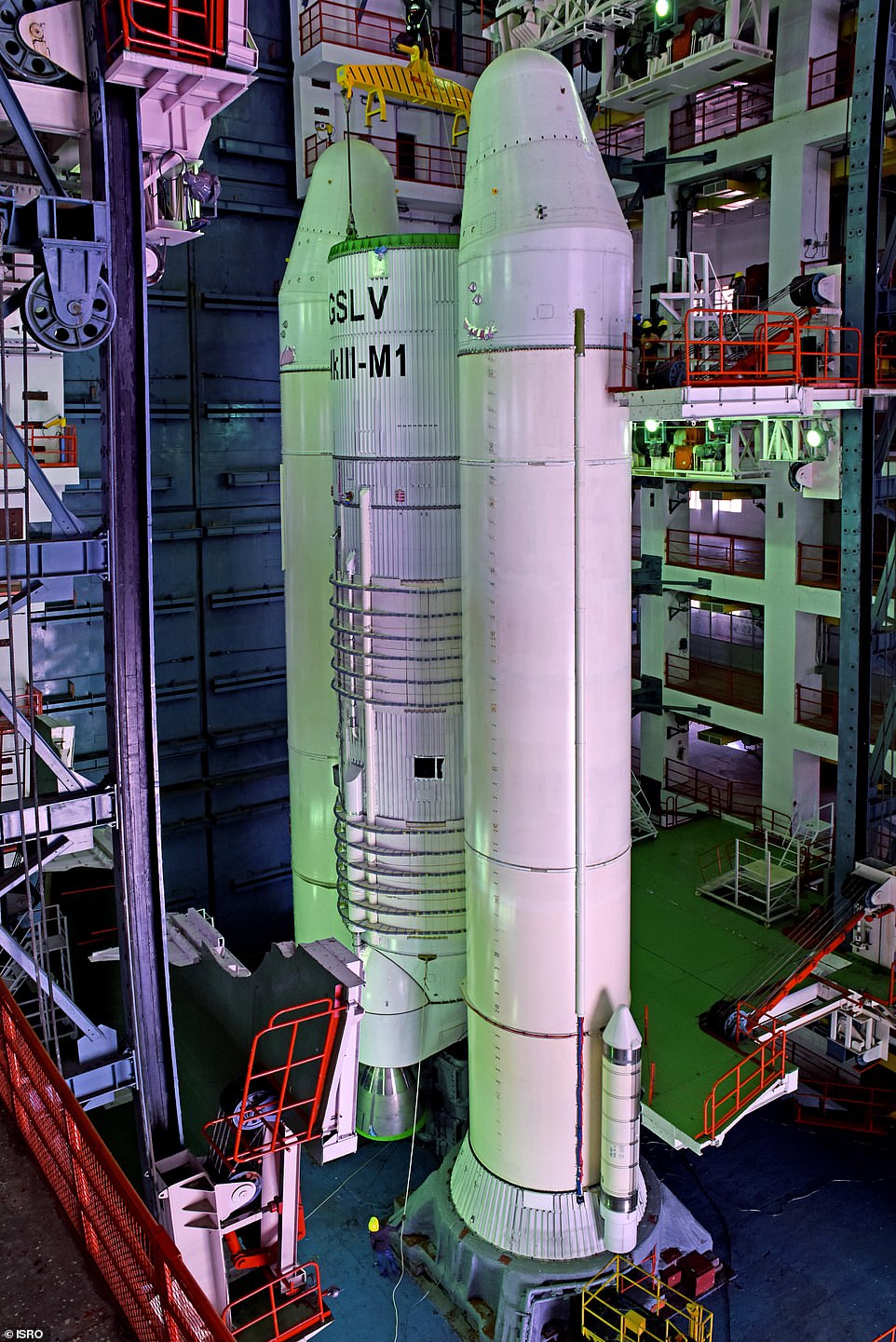 India’s space agency is preparing to launch its ambitious Chandrayaan-2 mission this weekend which is set to land near the currently unexplored south pole of the moon. Pictured: the mission’s launch vehicle, GSLV MK-III

WHAT HAS INDIA’S SPACE AGENCY DONE TO REACH THE MOON?

The £49 million ($69 million) mission was launched amid national euphoria, putting India in the Asian space race alongside rival China and reinforcing its claim to be considered a global power.

A vehicle landed on the moon a month later and sent back images of the lunar surface.

In 2009 India terminated the mission a year earlier than planned, after scientists lost all contact with their unmanned orbiting spacecraft. 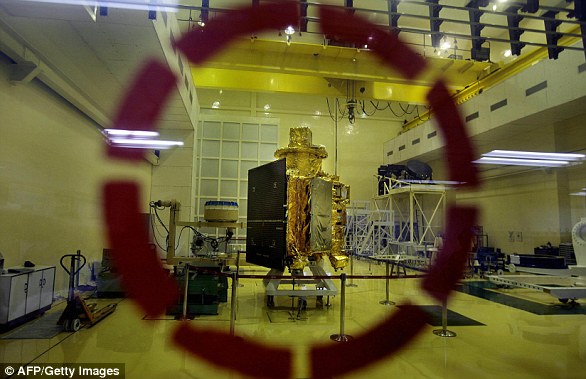 A crucial sensor in the main craft malfunctioned in July experts believe.

The satellite is believed to have crashed into the moon’s surface.

‘Our efforts to establish contact have failed. The mission has been terminated,’ said S Satish, from the Indian Space Research Organization (ISRO) at the time.

‘There was no point continuing with the mission.’

Named Chandrayaan-2, the vehicle will take between one and two months to reach orbit and once the rover reaches the surface it will explore the area around the south pole.

Weighing nearly 3,300kg (7,300lbs), the spacecraft will take off from the Satish Dhawan Space Centre in Sriharikota, off India’s southwest coast.