Rusting iron has been found on the Moon and it was likely the result of oxygen being carried to the lunar surface from Earth by solar winds, a new study discovered.

The oxidised iron mineral hematite – a form of rusted iron – was discovered at high latitudes on the Moon by planetary scientists from the University of Hawaii.

Iron is highly reactive with oxygen – forming reddish rust commonly seen on Earth – but the lunar surface and interior are virtually devoid of oxygen.

Finding evidence of highly oxidised iron-bearing minerals on the Moon ‘was a surprise’, the team explained, saying oxygen must have blown in on solar winds. 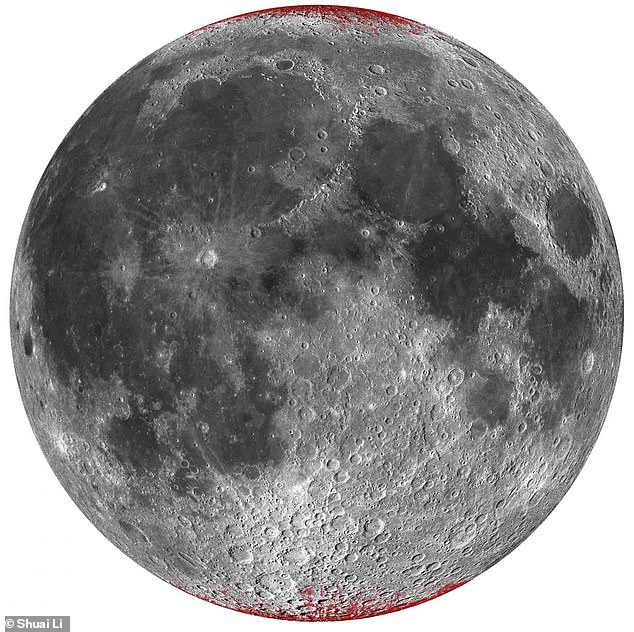 Enhanced map of hematite (red colour) on Moon using a spheric projection (nearside only).. The oxidised iron mineral hematite – a form of rusted iron – was discovered at high latitudes on the Moon by planetary scientists from the University of Hawaii

To make this discovery researchers from the University of Hawaii and NASA’s Jet Propulsion Laboratory analysed data captured by the Indian Chandrayaan-1 mission.

The Chandrayaan-1 mission included a lunar orbiter spacecraft and an impact probe sent from the orbiter to the Moon’s south pole to eject soil for analysis.

No examples of highly oxidised iron had been found in samples returned to Earth as part of the various NASA Apollo missions and hydrogen in solar winds regularly blast the lunar surface – acting in opposition to oxidation.

So, the presence of highly oxidised iron-bearing minerals, such as hematite, on the Moon was an unexpected discovery, according to lead author Shuai Li.

‘Our hypothesis is that lunar hematite is formed through oxidation of lunar surface iron by the oxygen from the Earth’s upper atmosphere that has been continuously blown to the lunar surface by solar wind when the Moon is in Earth’s magnetotail during the past several billion years,’ said Li.

To make this discovery, Li, Paul Lucey and others analysed the hyperspectral reflectance data acquired by the Moon Mineralogy Mapper (M3) designed by NASA JPL onboard India’s Chandrayaan-1 mission.

This new research was inspired by Li’s previous discovery of water ice in the Moon’s polar regions in 2018.

Map of hematite on the moon – redder colour means more hematite. Iron is highly reactive with oxygen – forming reddish rust commonly seen on Earth – but the lunar surface and interior are virtually devoid of oxygen

‘When I examined the M3 data at the polar regions, I found some spectral features and patterns are different from those we see at the lower latitudes or the Apollo samples,’ said Li.

Artemis 1 is the first in a series of complex missions that will enable human exploration to the Moon. 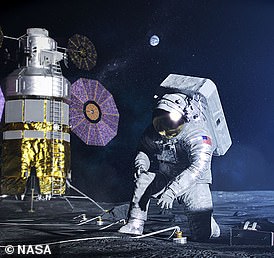 Artemis 1 will be an uncrewed flight that will provide a foundation for human deep space exploration.

With this first exploration mission, NASA is leading the next steps of human exploration into deep space.

Artemis 2 will take a crew on a lunar fly-by but the spaceship won’t land.

The first trip that will see astronauts step foot on lunar soil for the first time since Apollo 17 will be Artemis 3.

‘I was curious whether it is possible that there are water-rock reactions on the Moon. After months investigation, I figured out I was seeing the signature of hematite.’

The team found the locations where hematite is present are strongly correlated with water content at high latitude Li and others found previously.

They were also more concentrated on the nearside, which always faces the Earth – suggesting the rusted iron may be related to Earth, said Li.

‘This reminded me a discovery by the Japanese Kaguya mission that oxygen from the Earth’s upper atmosphere can be blown to the lunar surface by solar wind when the Moon is in the Earth’s magnetotail,’ the planetary scientists explained.

‘So, Earth’s atmospheric oxygen could be the major oxidant to produce hematite. Water and interplanetary dust impact may also have played critical roles’

While it was primarily found on the nearside, the team found that hematite was not completely absent from the far-side of the Moon where oxygen from the Earth may never have reached – but fewer examples were found there, said Li.

‘The tiny amount of water observed at lunar high latitudes may have been substantially involved in the hematite formation process on the lunar far-side.’

This could have important implications for astronomers trying to interpret observed hematite on some ‘water poor’ asteroids in our solar system.

‘This discovery will reshape our knowledge about the Moon’s polar regions,’ said Li. ‘Earth may have played an important role on the evolution of the Moon’s surface.’

The research team hopes the NASA’s ARTEMIS missions can return hematite samples from the polar regions.

The first crewed Artemis mission is scheduled to launch in 2024 where the first women and next man will step foot on the surface of the Moon.

The chemical signatures of those samples returned by the Artemis crew can be used to confirm Li’s hypothesis that Earth oxygen blew in on solar winds.

The samples may even be able to help reveal the evolution of the Earth’s atmosphere over the past billions of years since our world first formed.

The findings have been published in the journal Science Advances.

Many researchers believe the moon formed after Earth was hit by a planet the size of Mars billions of years ago.

This is called the giant impact hypothesis.

The theory suggests the moon is made up of debris left over following a collision between our planet and a body around 4.5 billion years ago.

The colliding body is sometimes called Theia, after the mythical Greek Titan who was the mother of Selene, the goddess of the moon.

Many researchers believe the moon formed after Earth was hit by a planet the size of Mars billions of years ago. This is called the giant impact hypothesis

But one mystery has persisted, revealed by rocks the Apollo astronauts brought back from the moon: Why are the moon and Earth so similar in their composition?

Several different theories have emerged over the years to explain the similar fingerprints of Earth and the moon.

Perhaps the impact created a huge cloud of debris that mixed thoroughly with the Earth and then later condensed to form the moon.

Or Theia could have, coincidentally, been chemically similar to young Earth.

A third possibility is that the moon formed from Earthen materials, rather than from Theia, although this would have been a very unusual type of impact.