Not only will Israel land the first privately funded spacecraft on our lunar satellite, but it will become just the fourth nation after the US, China and the then-Soviet Union to achieve the feat. Israel’s spacecraft is by far the smallest and is also the cheapest mission of those to have come before it, weighing in at just 1,300 pounds and costing $100m in private donations – just a shade of the billions of dollars it has cost to previously to get there. Israeli organisation SpaceIL is behind the lunar lander, known as Beresheet, and it has taken seven weeks to get from Earth to the moon.

The Israeli Space Agency (ISA) has vowed to share all of its data with NASA, and will join China’s Chang’e-4 which landed on the moon on January 3.

Yigal Harel, head of SpaceIL’s spacecraft program, told The Jerusalem Post: “The most significant thing is not just becoming the fourth country to land on the Moon, but our desire for young people in Israel to go and learn science.

“We know that we’re a start-up nation, and there’s a lot of hi-tech here and that people are our main resource. We want enthusiastic young pupils to go and learn engineering, mathematics, physics and more.” 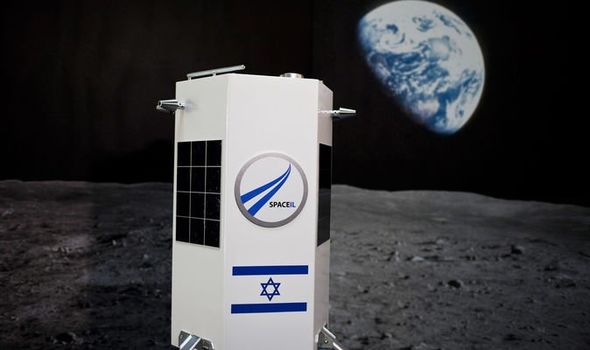 A statement from Israel Aerospace Industries (IAI) added: “This is the lowest-budget spacecraft to ever undertake such a mission.

“The superpowers who managed to land a spacecraft on the moon have spent hundreds of millions of dollars in government funding.

“Beresheet is the first spacecraft to land on the moon as a result of a private initiative, rather than a government.”

Beresheet will carry with it a digital “time capsule” which will be loaded with extracts from the Bible, children’s drawings and memories from a Holocaust survivor.

One of the reasons it was relatively cheap is the fact it was launched on Elon Musk’s SpaceX rocket Falcon 9.

SpaceIL will begin broadcasting the event at 7.45PM and you can watch the live stream here.