Jack Steinberger, who shared the 1988 Nobel Prize in Physics for expanding understanding of the ghostly neutrino, a staggeringly ubiquitous subatomic particle, died on Saturday at his home in Geneva. He was 99.

The ancient Greeks proposed that there was one invisible, indivisible unit of matter: the atom. But modern physics has found more than 100 smaller entities lurking within atoms, and observations of their dizzying interactions compose the Standard Model of what is now taken to be the order of the universe.

The neutrino’s existence was first proposed in 1931, to fill holes in a theory about the makeup of the universe, but finding one proved maddeningly difficult. It has no electrical charge, travels at the speed of light and has almost no mass. Each second, trillions of neutrinos pass unimpeded through every human being. Not until 1956 — when ways to smash atoms and examine the debris were developed — was one detected. 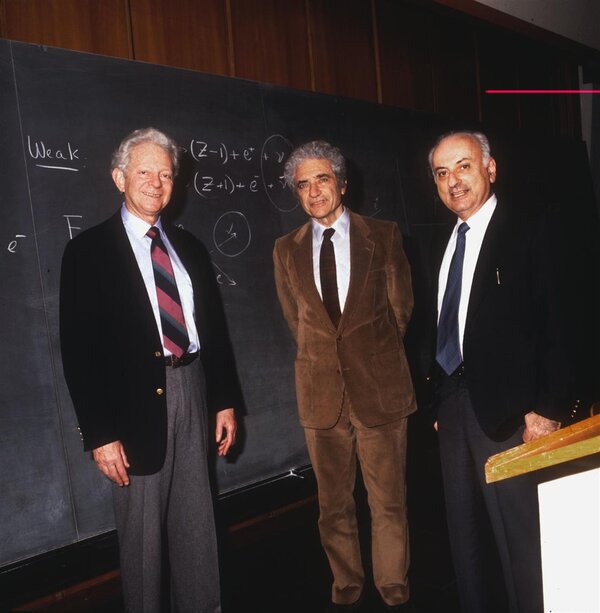 Six years later, Dr. Steinberger joined with two fellow Columbia University physicists, Melvin Schwartz and Leon M. Lederman, to show that two types of neutrinos existed. Just as significant, they devised a method to produce a beam composed of vast numbers of neutrinos at very high energies. The beam could be used to study one of the basic forces of nature: the weak interaction, virtually the only influence to which neutrinos respond.

This weak interaction is one of the four fundamental interactions of nature, along with the strong interaction, which binds an atom’s nucleus together, as well as electromagnetism and gravitation. It is responsible for the radioactive decay and nuclear fusion of subatomic particles, and is called weak because its strength is surpassed by both the strong force and electromagnetism. Gravitation is weaker still.

In bestowing the physics prize on the three men, the Nobel awards committee said they had “opened entirely new opportunities for research into the innermost structure and dynamics of matter.”

An experiment they conducted in 1961-62 used a new half-mile-long accelerator at the Brookhaven National Laboratory on Long Island to fire bursts of protons into a piece of beryllium metal. The collisions tore apart the beryllium nuclei, generating a flood of evanescent particles that fell apart in a cascade of debris.

These particles were then hurled into a 40-foot-thick wall of steel, which stopped all of them except neutrinos. The neutrino beam was then sent through 90 one-inch-thick aluminum plates. What came out on the other side was the team’s discovery: that there were two kinds of neutrinos. (Other researchers later discovered a third type.) And because neutrinos are affected only by the weak interactions, the neutrino beam allowed particle physicists to investigate such interactions. The long-mysterious neutrino became a research tool.

Normally, an experiment at the Brookhaven accelerator — the world’s largest at the time — was completed in a few hours. The neutrino experiment consumed 800 hours over eight months, a measure of the importance attached to the project. A year after it was finished, the European Council for Nuclear Research, known as CERN, confirmed the results.

Hans Jakob Steinberger was born on May 25, 1921, in Bad Kissingen in Bavaria, Germany, one of three sons of Ludwig and Berta Steinberger. His father was a cantor and religious teacher to the town’s small Jewish community; his college-educated mother supplemented the family income by giving English and French lessons.

With the rise of the Nazis and the enactment of laws barring Jewish children from attending public schools and from seeking higher education, his parents arranged for him and his older brother to go to the United States with the help of the American Jewish charities, which had offered to find homes for 300 German refugee children.

Soon, Dr. Steinberger wrote in a biographical sketch for the Nobel Foundation, “we were on the S.S. Washington, bound for New York, Christmas 1934.”

The brothers were placed in separate but nearby foster homes in the Chicago area. Jack settled into the home of a wealthy grain broker named Barnett Faroll, who several years later arranged for the boys’ parents and younger brother to join them in Chicago, rescuing them from the Holocaust, Dr. Steinberger wrote.

The family soon began operating a small delicatessen in Chicago.

The scholarship expired after two years, and he found a job washing bottles at a chemical laboratory for $18 a week. He studied chemistry at the University of Chicago in the evenings and worked at the family store on weekends. The university later awarded him a scholarship that allowed him to give up his day job. He graduated in 1942 with a bachelor’s degree in physics.

After the Japanese bombed Pearl Harbor in December 1941, he joined the Army, which sent him to the Massachusetts Institute of Technology to study physics so that he could work on developing radar bomb sights. After his discharge, with financial help from the G.I. Bill, he returned to the University of Chicago, where he found his niche as an experimental physicist working under Enrico Fermi and Edward Teller. He was awarded a Ph.D. in 1948.

He next spent a year at the Institute for Advanced Study in Princeton, N.J., working under J. Robert Oppenheimer, the so-called father of the atomic bomb. The theoretical physics he pursued there did not fulfill him, and he grabbed at a chance to join the radiation laboratory at the University of California, Berkeley. “I reverted easily to my wild state, that is, experimentation,” he said in a 1992 interview.

At Berkeley, though, he refused to sign a loyalty oath disavowing the Communist Party, even though he was not a Communist, and was asked to leave. Throughout his life, he joined other scientists to speak out against nuclear testing and American militarism. He declined to do weapons work.

Dr. Steinberger joined the Columbia faculty in 1950. In “The Second Creation: Makers of the Revolution in Twentieth-Century Physics” (1986), Robert P. Crease and Charles C. Mann characterized the university at that time as “the dominant center of particle physics in the United States, and thus the world.”

Afternoon coffee breaks brought students and faculty together to toss around ideas. “Everybody was sort of gathering around, throwing around crazy ideas on how to measure the weak interactions at high energies,” Dr. Schwartz said in a 1985 interview for the book.

One night, Dr. Schwartz came up with the idea of the neutrino beam, and by February 1960 he had worked out the structure of an experiment at the Brookhaven laboratory.

Meanwhile, Dr. Steinberger had deserted his Columbia colleagues and was working on essentially the same experiment at CERN, in Geneva. A miscalculation derailed this effort, and Dr. Steinberger returned to the Brookhaven endeavor.

But he returned to CERN in 1968 as a permanent employee, initially as director of experimental research in particle physics. There he led a team that established in 1989 that the universe contains no more than three fundamental types of matter. (The Stanford Linear Accelerator Center in California had announced the same result a day earlier.)

President Ronald Reagan awarded Dr. Steinberger the National Medal of Science in 1988. He continued to frequent the CERN laboratory into his 90s. In 2004, he published an autobiographical account of his life and career, “Learning About Particles: 50 Privileged Years.”

Dr. Steinberger’s marriage to Joan Beauregard ended in divorce. In addition to Ms. Alff, he is survived by two sons from his first marriage, Joseph and Ned; two children from his second marriage, Julia and John; and four grandsons.

In 1988, The Economist said Dr. Steinberger “enjoys a reputation as one of the finest experimental physicists in the world.” The magazine continued, “In a field full of flamboyance and a fair bit of arrogance, he is a quiet, modest man; something of a physicist’s physicist.”

As if to prove the point, Dr. Steinberger told a meeting of Nobel laureates in 2008 that scientists should “be interested in learning about nature,” not prizes.

“The pretension that some of us are better than others,” he said, “I don’t think is a very good thing.”