In an effort to try and better predict large earthquakes, a team of researchers from The University of Tokyo and the Japan Coast Guard have developed a new way of monitoring for smaller ‘silent earthquakes’ below the ocean floor.

The satellites measure the movements of the ocean surface, while the coast guard ships use an acoustic ranging system that can track deformations on the ocean floor as small as two inches. 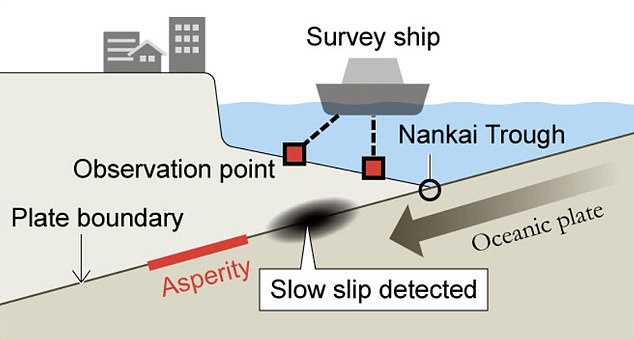 A team of researchers from the University of Tokyo and the Japan Coast Guard have developed a new system for detecting ‘silent earthquakes,’ or small tectonic shifts below the Earth’s surface that don’t produce detectable tremors but could be signs of a future quakes

The researchers used the GNSS-A system to analyze data collected between 2006 and 2018 around the Nankai Trough around 30 miles off the coast of southern Japan.

They found multiple ‘slow slip’ occurrences at seven different locations along the trough, measuring from two to three inches.

These slips occur when two tectonic plates move against each other without causing any detectable tremors.

They are common below the Earth’s surface, at depths of up to 40 miles.

These slips are most common near the Earth’s core, where tectonic plates and heated by magma and become pliable, causing them to slip against each other without any immediate effect.

The relationship between these numerous small slips and major earthquakes remains unclear, but the Tokyo researchers hope their newly collected data will provide resources to help connect the dots. 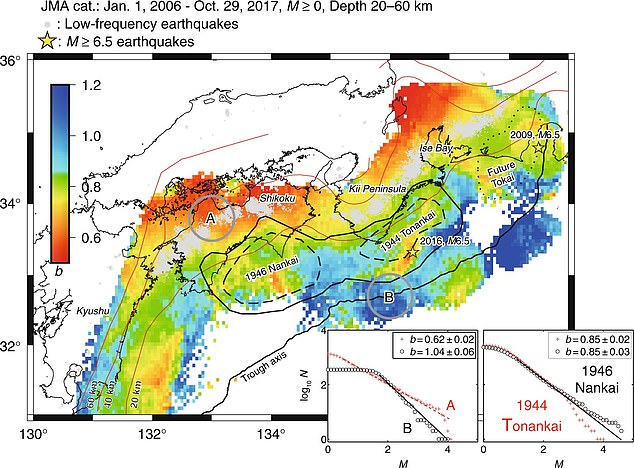 The Nnakai Trough (pictured above) is a large region off the coast of southern Japan, and where the researchers found seven distinct locations where ‘silent earthquakes’ occurred

“Differences in the features between these regions may be related to earthquake history and reflect different friction conditions,” the University of Tokyo’s Dr. Yusuke Yokota told Phys.org.

‘Detailed understanding of these friction conditions and how they relate spatiotemporally to megathrust earthquake events is essential for accurate earthquake simulation.’

‘Therefore, studying these newly discovered slow slip events in the Nankai Trough will contribute to earthquake disaster prevention and preparedness.’

Some have speculated the 2011 tsunami that devastated Japan following an earthquake in the Nankai Trough could have been connected to multiple smaller slips that preceded it. 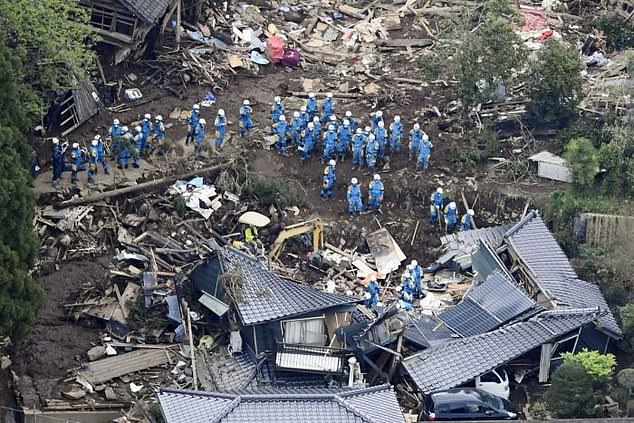 Last year a report from the South China Morning Post tied the discovery of around 20 dead oarfish floating on the ocean surface before the 2011 quake to effects from smaller slips.

Oarfish are a long and silvery deep sea fish that typically lives at a depth of around 3,000 feet and are rarely seen at the surface.

When pressure builds up between tectonic plates below the seafloor, it can cause an electrostatic charge to be released.

One theory has it that small slips release that electrostatic charge, which can kill sea life like the oarfish.