Jeff Bezos is NOT an astronaut! FAA changes rules for how it awards astronaut wings – and says the Blue Origin flight crew do not count as the spacecraft was entirely controlled from the ground

Despite flying to the edge of space, Amazon founder Jeff Bezos does not qualify for his astronaut wings, after the US Federal Aviation Authority tightened its rules.

Bezos and the crew of Blue Origin took off from their base at Van Horn, Texas, at 9.12am EST on Tuesday, the 52nd anniversary of the moon landing.

It is the autonomous portion of the spaceflight that will see Bezos, his brother Mark, Wally Funk and Oliver Daemen miss out on their FAA-approved wings.

In order to qualify, they have to make a contribution to the flight and to human space flight safety while travelling beyond the 50 miles mark defined as space by the FAA.

However, it doesn’t take away from them going into space, as Blue Origin achieved this feat, and Bezos is the richest man to go to space, Wally Funk the oldest, and Oliver Daemen the youngest. 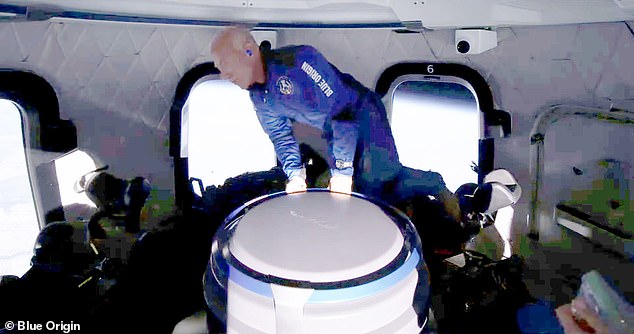 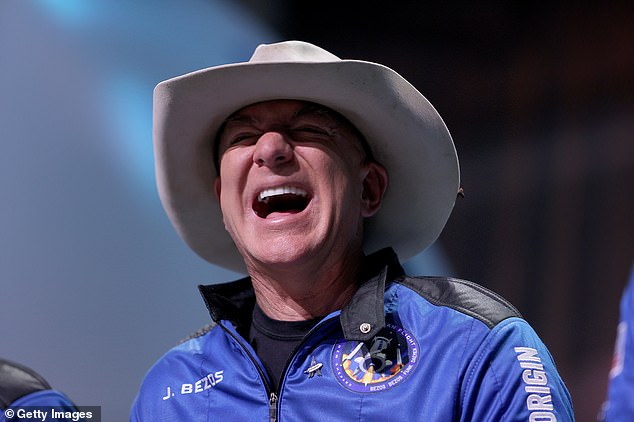 The Amazon billionaire was almost euphoric after returning to Earth with his crewmates. He described it as a ‘perfect mission’ 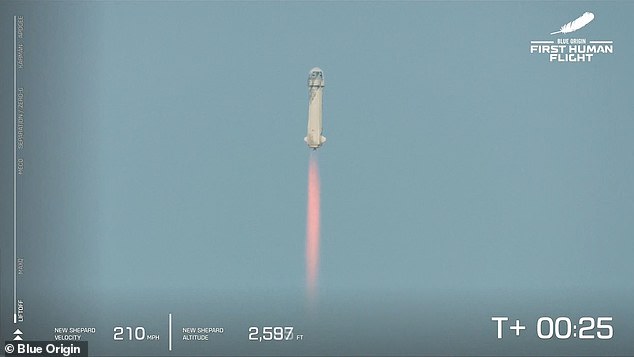 The New Shepard launched the capsule carrying Jeff Bezos and three other passengers into space on Tuesday, 25 seconds after lift off

They are gradually moving from suborbital to orbital flight in an incremental way and will launch humans to space on July 20.

Bezos will be on that first crewed flight along with his brother Mark, the winner of the auction, and three members of Blue Origin staff.

Bezos has announced they are also working on New Armstrong, after the first man on the Moon, Neil Armstrong, although no details have been revealed.

So far, only Virgin Galactic pilots, flying the spaceplane from the cockpit, and chief astronaut Beth Moses, who flew solo in the cabin on a test flight, have been awarded the new commercial FAA astronaut wings. Nobody from Blue Origin has qualified.

With the Blue Origin New Shepard spacecraft controlled entirely from the ground, with no input from the crew on board, the new FAA criteria wasn’t met.

This could put the entire space tourism industry in doubt, experts predict, as passengers on the various spacecraft wouldn’t ‘get their wings’.

It is possible a new category of ‘space tourist’ or commercial astronaut is created to describe those who go to space purely as a passenger, rather than crew or pilots.

Mary Robinette Kowal, award winning author of the Lady Astronaut series, suggested on Twitter that astronaut should be an ‘earned term’ reserved for someone engaged in space exploration and science.

She said: ‘One of the things that bothers me is calling these passengers “astronauts.” Spacefarers, yes. I’ve felt like astronaut ought to be an earned term.’

This doesn’t mean they wouldn’t be astronauts, as the firms themselves could issue their own wings, with a tourist becoming a Virgin Galactic or Blue Origin astronaut, but they wouldn’t be issued or recognised by an independent authority like the FAA.

Blue Origin had argued that because they fly above the internationally recognised ‘Karman Line’ at 62 miles above the Earth, they meet international astronaut standards, whereas Virgin Galactic only operates to just over 50 miles.

This is the line defined as the edge of space by both NASA and the FAA, and so far only Virgin Galactic pilots, as well as chief astronaut Beth Moses, who flew solo in the cabin on a test flight, have been issued with FAA astronaut wings.

Branson and his crew were each given a specific task to operate while in the cabin, with Branson responsible for ‘the passenger experience’ which may be enough for them to each qualify for FAA wings, although that isn’t entirely clear.

Sir Richard Branson travelled to the edge of space on VSS Unity on July 11, becoming the first of the ‘billionaire space set’ to leave the Earth in their own firms vehicle.

The wings don’t actually carry any legal status and come with no privileges beyond bragging rights, but it is seen as beneficial to have an independently issued badge.

It isn’t all bad news for the Blue Origin crew though, as the FAA is able to issue honorary wings in exceptional circumstances. 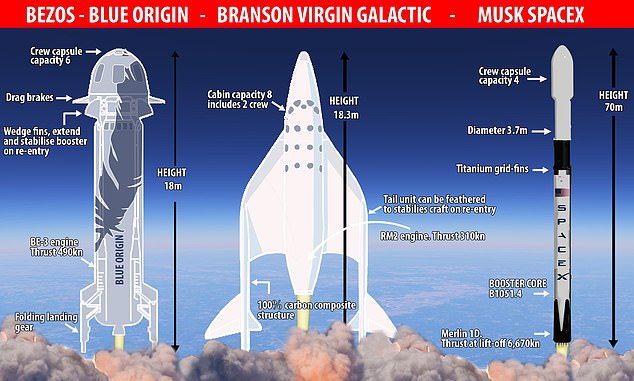 In order to qualify as an astronaut crew have to make a contribution to the flight and to human space flight safety while travelling beyond the 50 miles mark defined as space by the FAA. 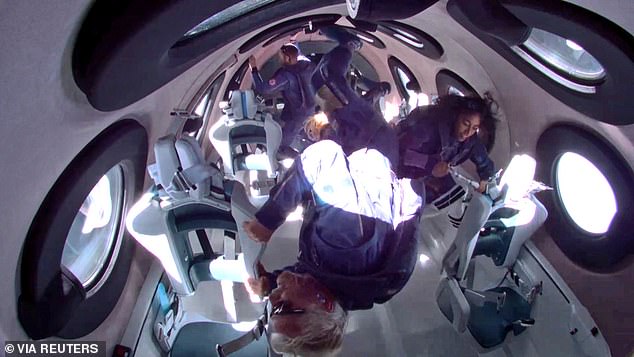 While Blue Origin and Virgin Galactic both pass the 50 mile mark, it isn’t clear whether the passengers make enough of a contribution to be called ‘astronaut’ 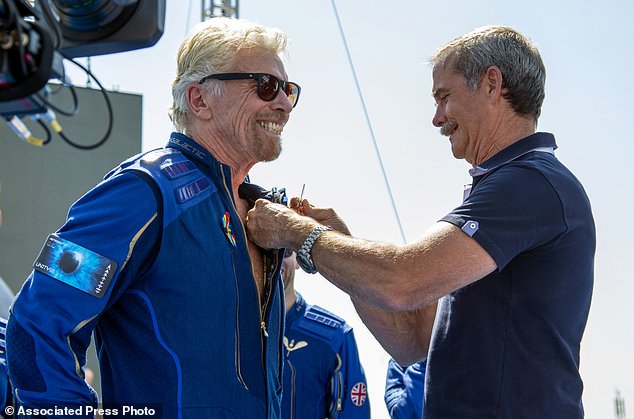 This is for ‘individuals who demonstrated extraordinary contributions or beneficial service to the commercial human space flight industry’ but don’t meet the criteria.

This means Wally Funk, who completed NASA training in the early 1960s, could still earn her wings from the flight on July 20.

Funk, an aviation pioneer, was part of the 1960s Women in Space training scheme, until it was shut down during the Cold War. Despite besting some of the Mercury 7 astronaut scores, she never got to go to space.

Even without the badge, she still became the oldest person to go to space as the craft passed the 50 mile mark by 13 miles, the question is over the title astronaut.

Blue Origin have been asked for a comment but have yet to respond.

‘It was the perfect mission’: World’s richest astronaut Jeff Bezos reveals masterplan to ‘build a road to space’ as he debriefs on his 10-minute, 66-mile-high trip that cost $550m per MINUTE

The world’s richest man Jeff Bezos described his journey to space as the ‘perfect mission’ and a ‘tiny little step’ in his masterplan to build a road to space where he thinks the world’s major industries will be able to operate in the future to save planet Earth.

Bezos and the crew of Blue Origin took off from their base at Van Horn, Texas, at 9.12am EST on Tuesday, the 52nd anniversary of the moon landing, 12 minutes behind schedule. They ascended for four minutes before the New Shepard rocket booster separated from their capsule, leaving them floating in zero gravity for four minutes.

Bezos and Mark floated about, pretended to swim and tossed skittles in each other’s mouths while in the air, they said afterwards. They had written ‘Hi’ and ‘Mom’ on their palms and put their hands together for their mother Jacklyn while in space.

They were joined by 18-year-old Oliver Daemen – the word’s first paying customer to buy his flight – and 82-year-old Wally Funk, who passed NASA’s space program in the 1960s but never made it to space because the women’s flight was canceled.

They then returned to earth with parachutes controlling the pace of their descent, touching down in the Texas desert at 9.22am EST, 10 minutes and 20 seconds after liftoff.

The 10 minute journey cost $5.5billion – $550million per minute. Bezos, who stepped down as Amazon CEO earlier this year and will now split his time between Blue Origin and his environmental charity, said at a press conference after the flight: ‘For every amazon customer, you guys paid for all this so thank you from the bottom of my heart.’

The comment that is likely to sting critics who say the commercial space race between Bezos and fellow billionaires Elon Musk and Richard Branson is elitist and unfair when so many others will never be able to afford the experience.

Bezos’ Blue Origin crew traveled 66 miles above the surface of Earth – 13 miles higher than Virgin Galactic billionaire Branson. He tweeted his congratulations to the team afterwards.

Bezos says his goal is to move the world’s major industries that are damaging the planet to space in order to preserve Earth’s environment. He wants to develop space travel like aviation pioneers did with commercial airliners, and says eventually, it’ll become more affordable.

On Tuesday he revealed he has already sold $100million in tickets for future flights.  Blue Origin will perform another two commercial flights this year using the same capsule but different boosters.