UFOlogist Scott C Waring believes his evidence of a genuine “Egyptian-style carving” could unravel the mysteries of the Great Pyramids of Giza. The carving in question is the supposed tomb of an alien king, which Mr Waring unearthed in a 12-year-old NASA Mars rover picture. The self-titled UFO expert shared his bizarre “discovery” on his blog ET Data Base, arguing it could be the real deal. Mr Waring wrote: “Guys I wanted to share this with you. Not only did I find an Egyptian-style carving on a hill on Mars but I actually found several.

“There are several other carvings near this great one and I added a yellow colour to the image to make them more visible because the black and white image often makes details harder to notice.”

The photo, coloured over by Mr Waring, appears to show a vaguely human-like shape protruding from a Martian cliff side.

An elongated shape on top of the carving’s “head” resembles Ancient Egyptian headwear known as the double crown.

And the supposed carving’s overall shape is oddly reminiscent of a mummy’s sarcophagus or the statue of a sitting God. 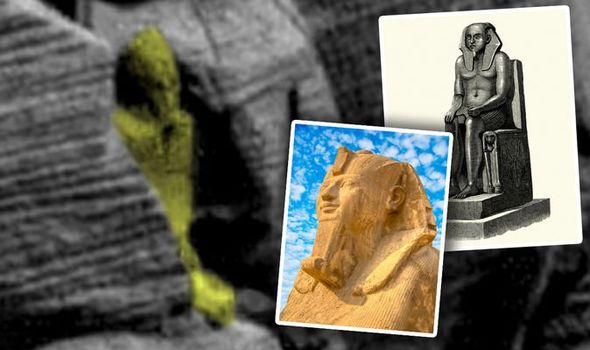 Mr Waring said: “This really has me asking, are Ancient Egyptians from Mars?

“Did they then move to Egypt, because Egypt is very similar in appearance and weather to that of Mars?

“No other place on Earth looks as much as Mars. So, if this is true, it totally explains why such amazing pyramids are built way out in the middle of nowhere.

“Because it was the closest to home that they could come.”

The photographed was snapped by NASA’s Mars Opportunity rover on May 7, 2007.

Are Ancient Egyptians from Mars

But according to the US space agency, it does not show any extraterrestrial artefacts, but rather a 39ft-tall (12m) cliff on the rim of Victoria Crater.

Victoria is massive impact crater in the so-called Cape St Vincent area of the Meridiani Planum extraterrestrial plain and was explored by the lonely NASA rover.

NASA said: “These super-resolution images have allowed scientists to discern that the rocks at Victoria Crater once represented a large dune field, not unlike the Sahara desert on Earth, and that this dune field migrated with an ancient wind flowing from the north to the south across the region. 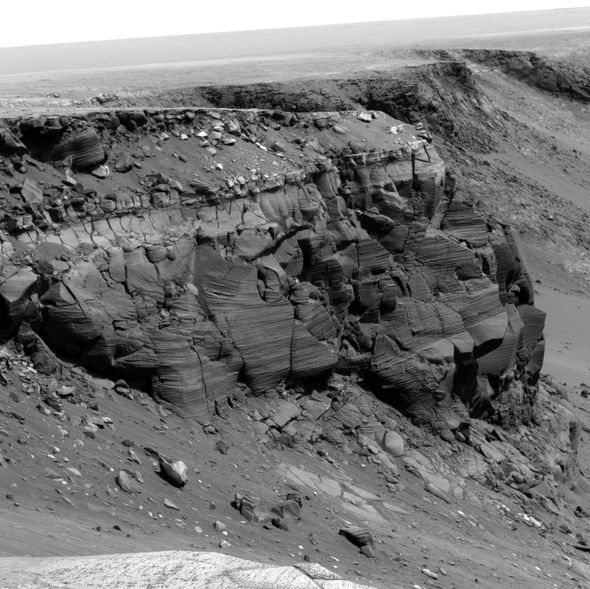 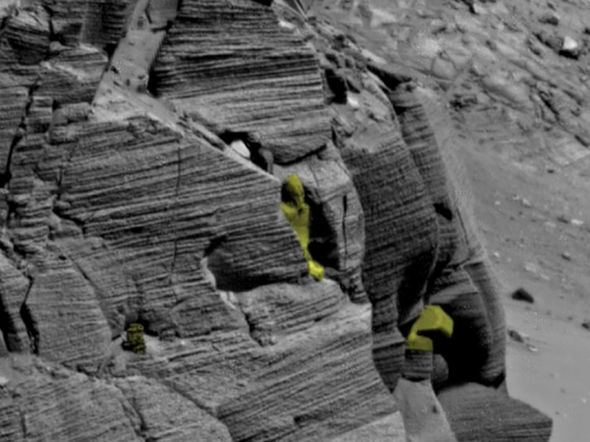 “Other rover chemical and mineral measurements have shown that many of the ancient sand dunes studied in Meridiani Planum were modified by surface and subsurface liquid water long ago.

“This is a Mars Exploration Rover Opportunity Panoramic Camera image acquired on sol 1167 – May 7, 2007 – and was constructed from a mathematical combination of 16 different blue filter – 480 nm – images.”

But why did Mr Waring insist on calling the rock formation an alien structure?

The most likely cause is a psychological mind trick known as pareidolia.

NASA explained: “Pareidolia is the psychological phenomenon where people see recognisable shapes in clouds, rock formations, or otherwise unrelated objects or data. There are many examples of this phenomenon on Earth and in space.”