A lunar eclipse tonight will cast a breathtaking blood red glow onto the surface of the Moon, a frightening but ultimately wondrous event. Natural alignment of the Earth and Moon will cause the incoming eclipse, which will appear naturally larger and brighter than normal during maximum on January 21. This is because of the elliptical nature of the Moon’s orbit around the Earth, carrying it much closer than usual. As such, some spectacular pictures have sprung from the event, which has taken place across the planet.

Where is the lunar eclipse visible?

The Lunar Eclipse will be visible in most countries, apart from a few select places in Europe and Asia.

Other parts of the World may only see a partial eclipse, when only a small portion of the Moon will turn an eery red.

Britain is one of the few lucky countries to see every stage in the blood moon’s cycle. 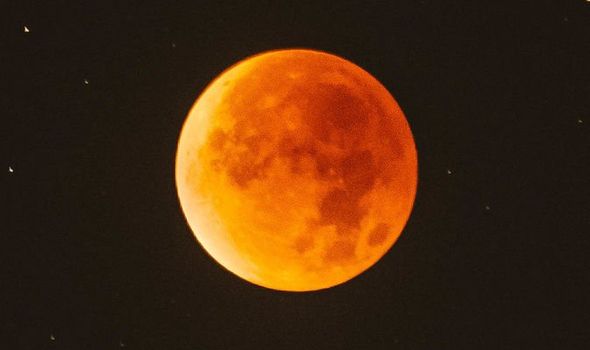 Every inch of the UK will bear witness, weather permitting.

Sadly, the weather will make things difficult, as most parts of the country will see mainly cloud.

Astronomers at the Royal Observatory in Greenwich thankfully have people covered for the night, with a live stream starting at 8pm GMT.

Those who miss this can see what happened after the fact on YouTube.

READ MORE: Why is the eclipse turning the Moon red?

What causes a blood moon?

A blood moon is the direct product of a lunar eclipse – when the Earth is positioned in between the Moon and Sun.

This can happen a few times per year, and unlike a solar eclipse, light from the Sun is not completely blocked out from casting a presence on the Moon.

Instead, the light which is able to escape the Earth’s shadow travels though its atmosphere.

The atmosphere is made up of a collection of different constituent elements, including gases, liquids and dust particles.

These elements have a particular effect on the Sun’s light spectrum.

Only a certain portion of the spectrum will be able to refract through the atmosphere, namely orange and red colours, giving the blood Moon its trademark rusty look.

These reactions are the same ones responsible for causing the deep orange glow of a sunset.