A panoramic shot of a flying Dalmatian Pelican and a wolf killed in a fight for dominance were just two of the images that won an annual photo competition.

The British Ecological Society’s photography competition drew entries from ecologists and students around the world, including all kinds of plants and animals.

The stunning photos celebrate the diversity of ecology on planet Earth, according to the organisers, who had about 500 images sent in for the competition.

Subjects range from a standoff between a roadrunner and rattlesnake, flamingos feasting at sunset and baby octopi emerging from their egg sacs.

Categories included, Up Close and Personal, Dynamic Ecosystems, Individuals and Populations, People and Nature, Ecology in Action and The Art of Ecology.

The overall winning shot, titled ‘The art of flight’, which shows a Dalmatian Pelican gliding over Lake Kerkini in Greece, was taken by Alwin Hardenbol, a PhD candidate at the University of East Finland. 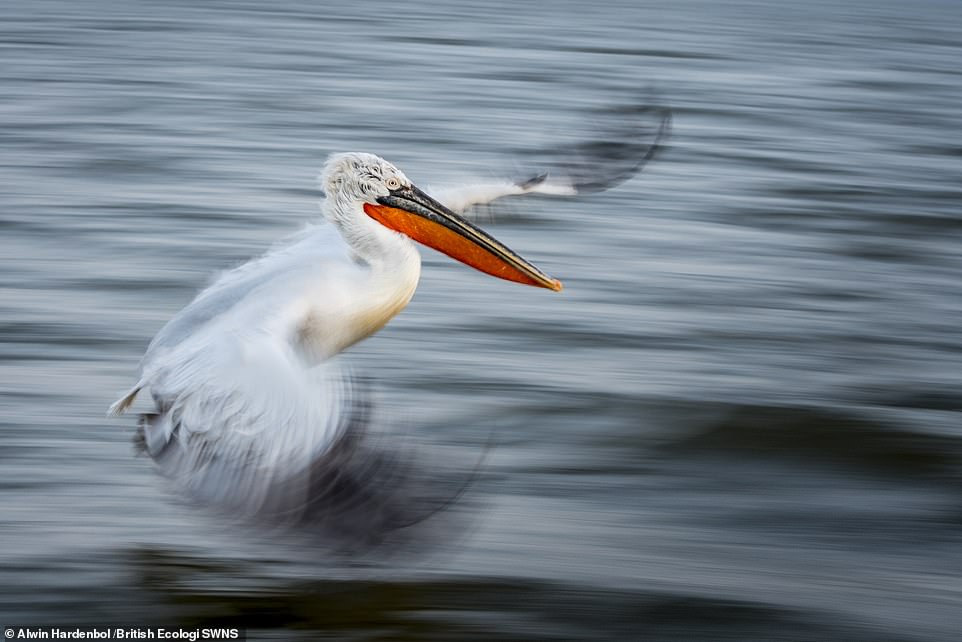 The art of flight captured by Alwin Hardenbol, a PhD candidate from Finland. A panning shot of a flying Dalmatian Pelican (Pelecanus crispus). An internationally near-threatened bird species. Overall winner 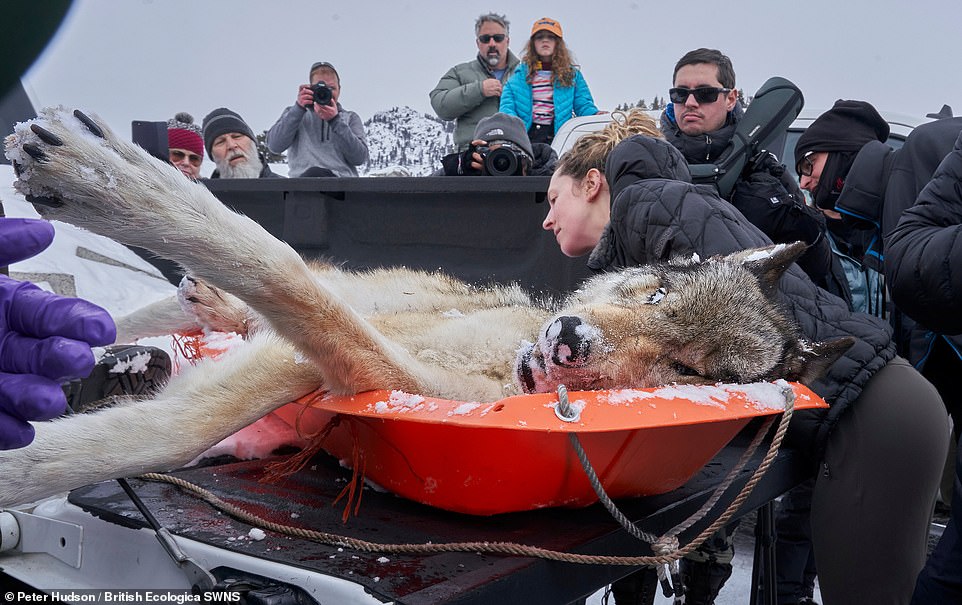 Wolf Fascination by Peter Hudson. Grad student Ellen being watched by fascinated visitors to Yellowstone as she examines one of her study animals, a wolf killed in a fight for dominance after she killed the pups of the alpha female – her sister. Ecology in Action winner 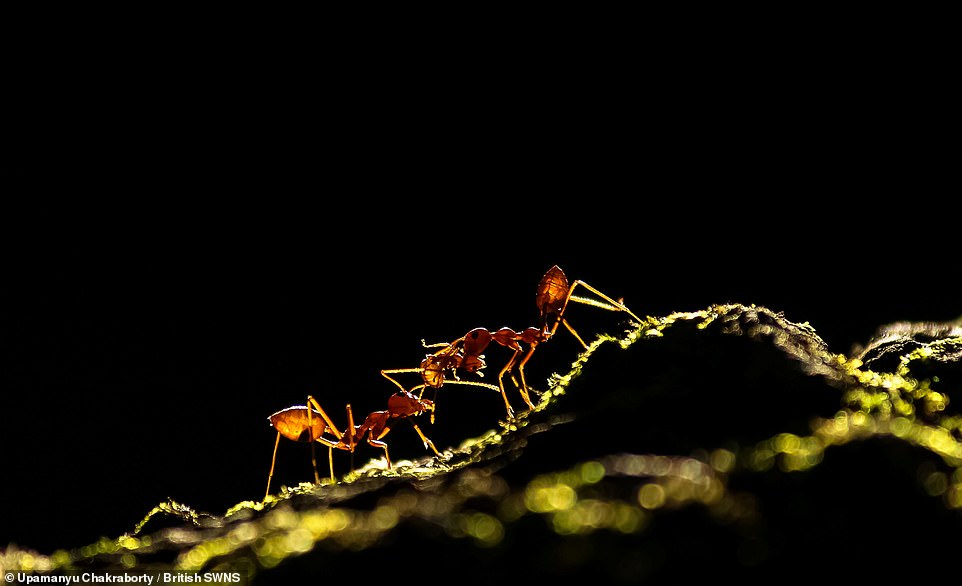 Ant tale – Upamanyu Chakraborty. Weaver ants are social animals. This photograph is a close-up of a weaver ant colony where the ants are carrying their immature members to a safer place. Overall runner-up 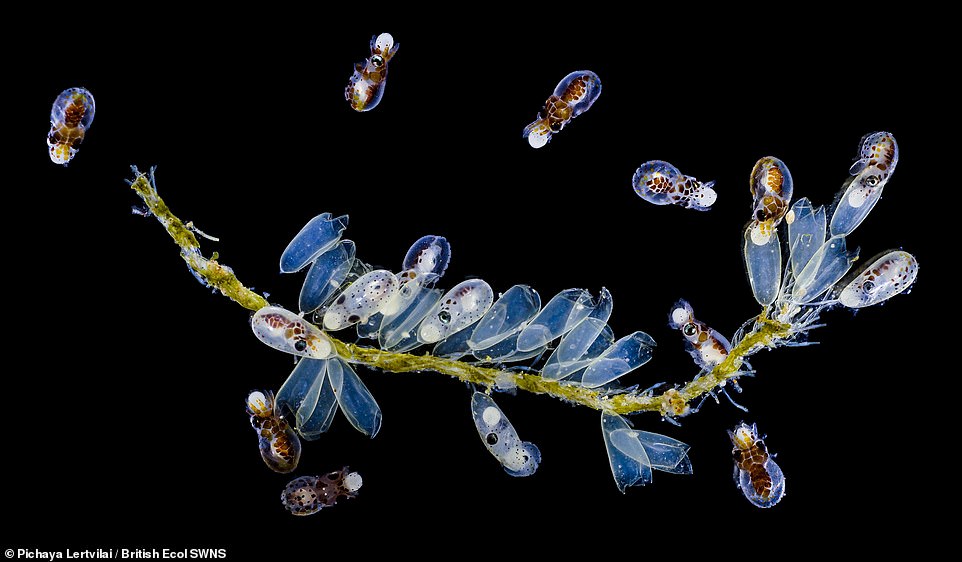 Hatching – Pichaya Lertvilai. Paralarvae of Octopus bimaculatus emerging from their egg sacs. The emerging paralarvae still carried their yolks with them for the first few days of their new journey. Overall runner up

Two photographs, a winner and a student winner, were selected by a panel of independent judges for each of the competition’s six categories.

This was then whittled down to an overall winner and runners-up – all entries were from members of the British Ecological Society around the world.

Ms Hardenbol, who also won the People and Nature category, said he called his image ‘the art of flight’ as he was impressed with how the bird’s wings appeared.

‘You can almost see the bird flying in front of you despite it being an image,’ he said. 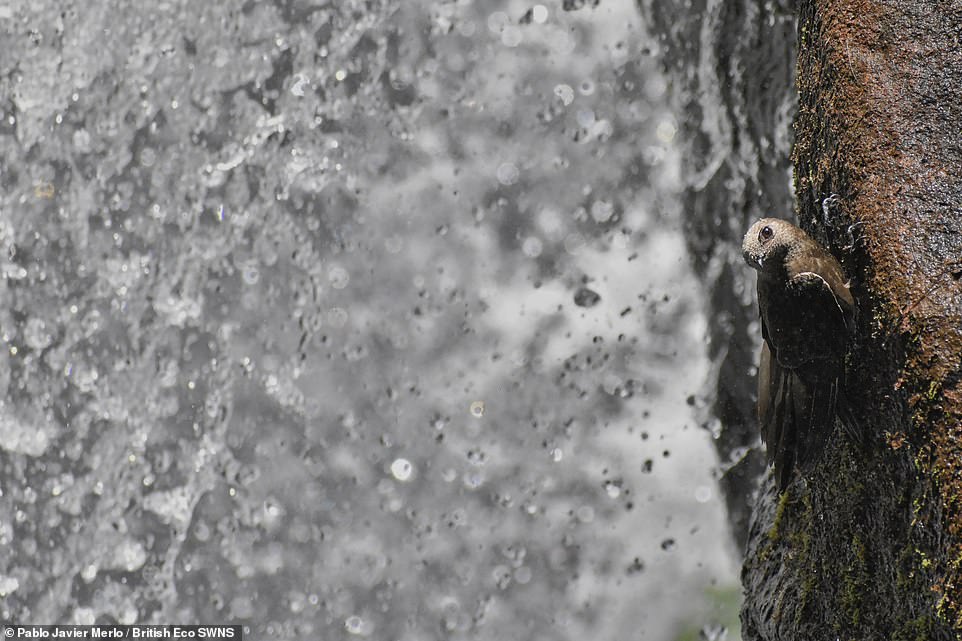 Waterfall swift – Pablo Javier Merlo. Cypseloides senex is a species of swift known in Latin America literally as “Waterfall swift”. It can be found on the steep rocky walls (up to 80 meters high) of the Iguazú Falls, flying frequently near and through these waterfalls offering a unique show. Overall student winner 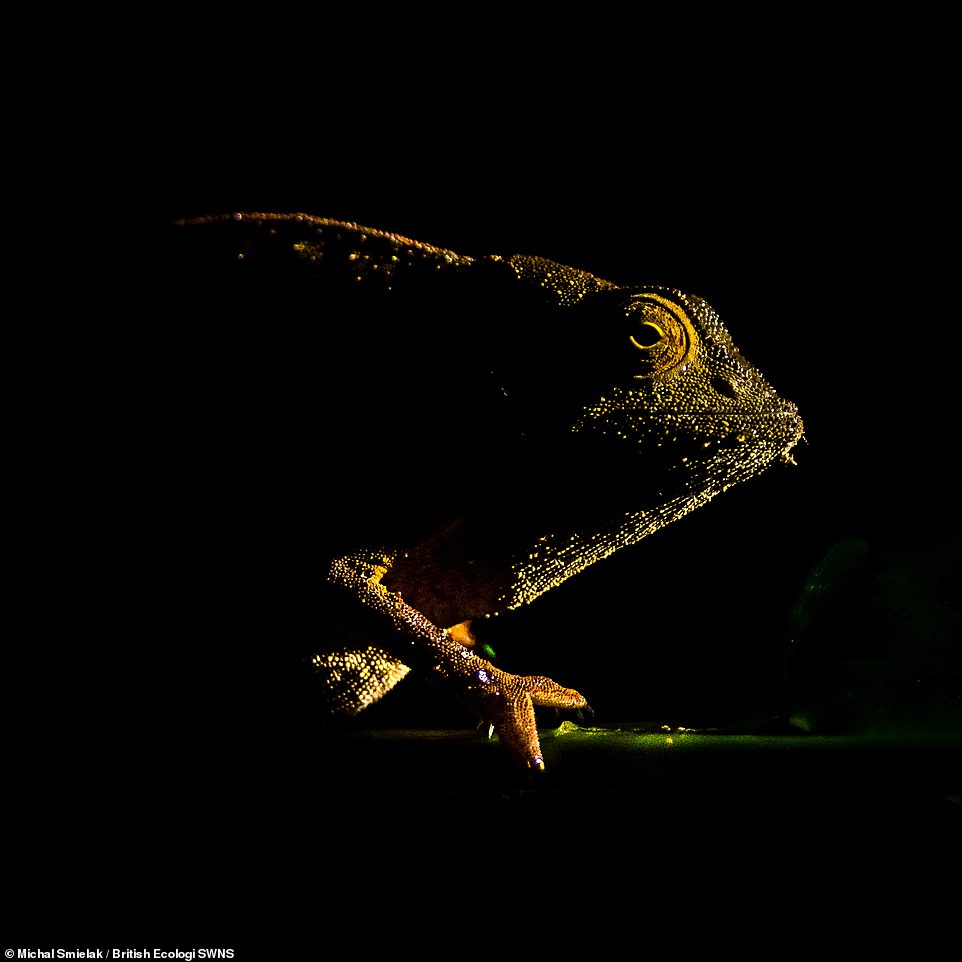 Breath. Adapt. Relax – Michal Smielak. Bearded leaf chameleon (Rieppeleon brevicaudatus), with its rather underwhelming “beard” consisting of just a few raised scales. The species is endemic to Eastern Arc Mountains of Tanzania and Kenya. This one was spotted during a night walk in the Udzungwas. Winner Up Close and Personal 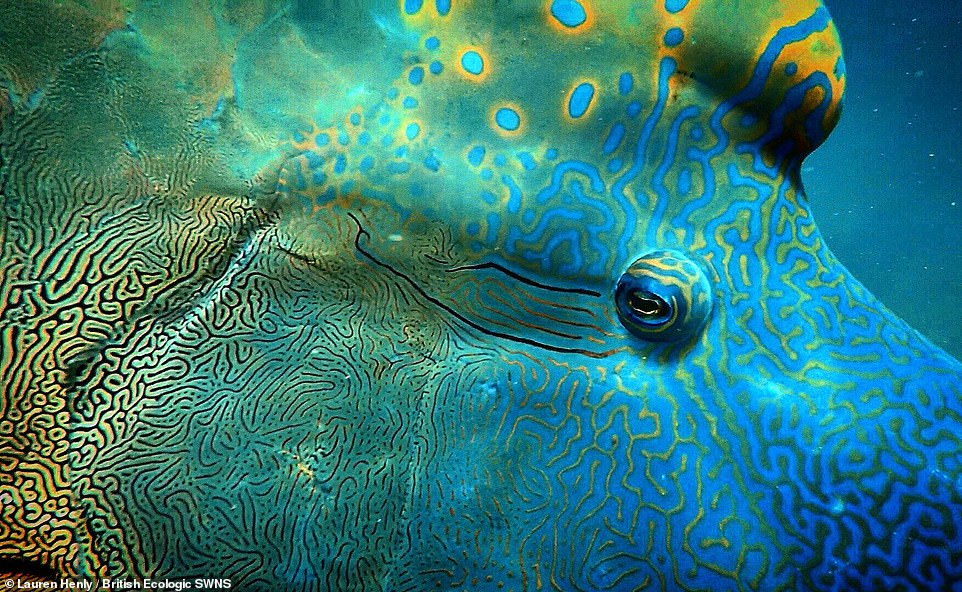 Look into my eye – Lauren Henly. This humphead wrasse (Cheilinus undulatus) swam up to me at the end of a dive on the Great Barrier Reef and looked directly into my eye. Student winner Up Close and Personal

‘I used a technique called panning which involves using a slow shutter speed and moving the camera along with the bird as it flies.

‘In a perfect scenario, the background and most of the bird will show blurred movement but the head should be sharp.

‘I took thousands of pictures and while most failed, I was very happy with this shot.’

A Great Dusky Swift on the steep rocky walls of the Iguazú falls in Argentina, captured by Pablo Javier Merlo, a Biology student at the Nacional University of Córdoba, was the overall student winner.

Mr Merlo said: ‘The Iguazú National Park has remarkable importance since it protects a very diverse natural ecosystem, and the waterfall swift is an important icon of Iguazú and its diversity.

‘I am very grateful to be selected as one of the winners and feel motivated to continue learning about photography, which is an excellent tool to show our planet’s wildlife and how it relates to its environment.’

The overall winner received £750 and a DIY cardboard camera, while the runners-up and student winner were awarded £250 and £100 respectively.

A a bearded leaf chameleon relaxing on a branch against a black background in Tanzania, by Michal Smielak, won the Up Close and Personal category. 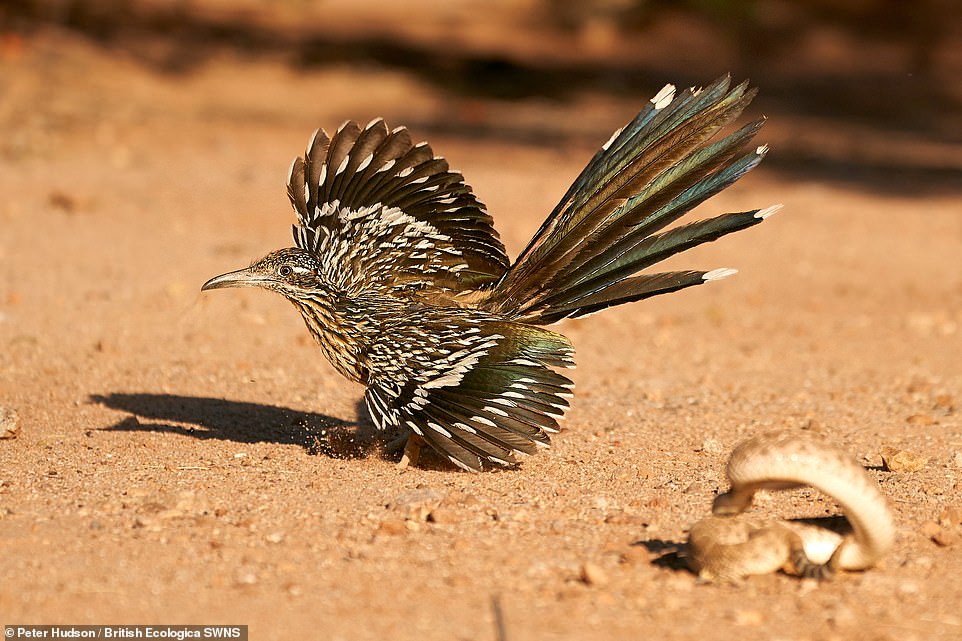 Dances with Rattlers – Peter Hudson. A roadrunner dances around a western diamond back rattlesnake, keeping its wings out and feathers exposed with its body hidden, so minimizing death if the snake were to strike. Winner Dynamic Ecosystems 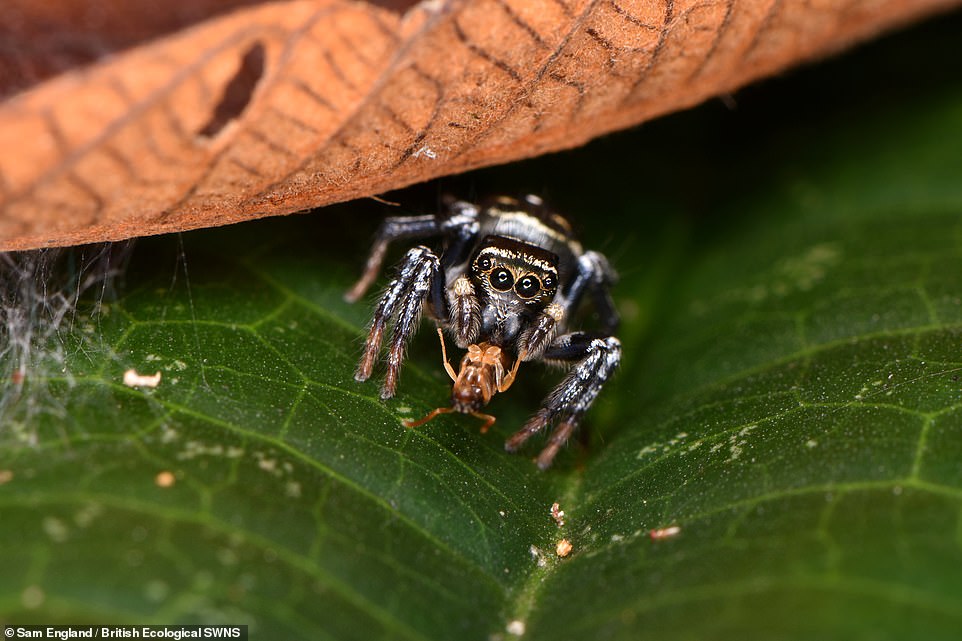 Into the Lion’s den – Sam England. A jumping spider (family Salticidae) sits at the edge of its den, constructed on the underside of a fallen leaf in the rainforests of Costa Rica, as it triumphantly feasts upon its unfortunate insect prey. Student winner Dynamic ecosystems 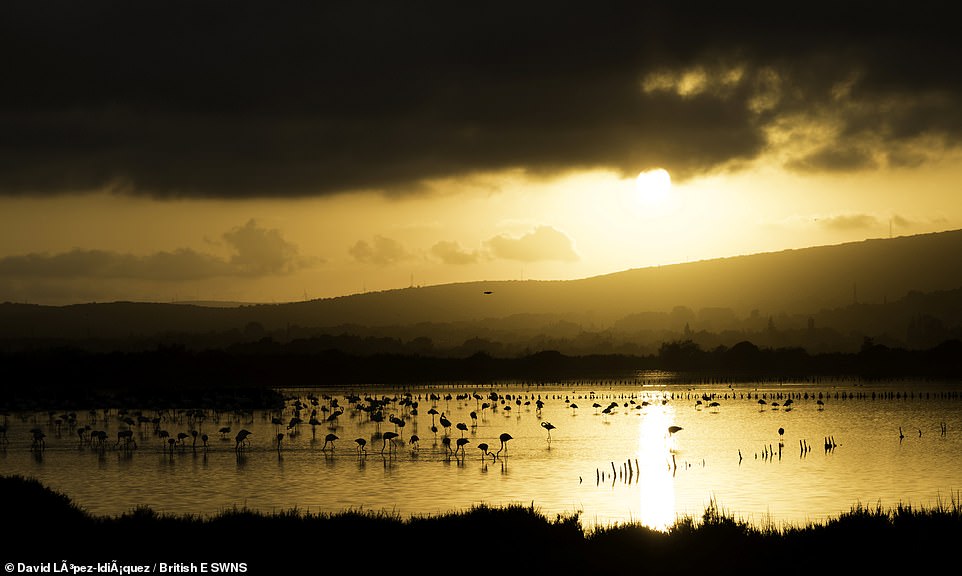 Last Meal of the Day – David López-Idiáquez. At the saltworks of Villeneuve-lès-Maguelone in the vicinities of Montpellier (France), a group of greater flamingos (Phoenicopterus roseus) feed just before the end of the day. Winner Individuals and Populations 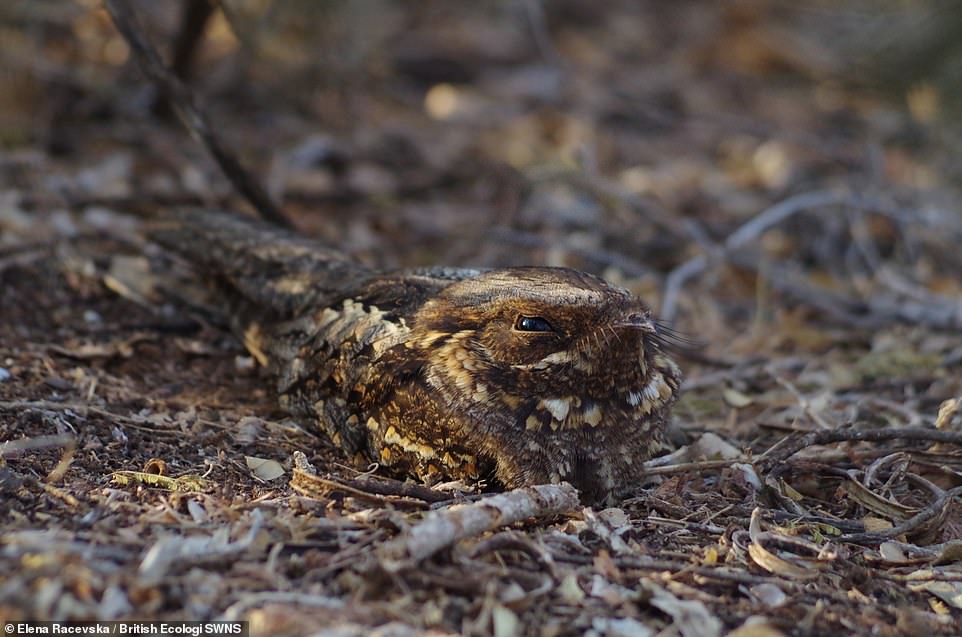 I see You – Elena Racevska. A Madagascan nightjar (Caprimulgus madagascariensis), having a daytime rest. Student winner Individuals and Populations

This category required photographers to use close-up or macro photography.

The Dynamic Ecosystems award was handed to Peter Hudson for his picture of a roadrunner dancing around a western diamondback rattlesnake, with its wings spread wide.

A picture of flamingos feeding at the end of the day, taken near Montpellier in France, won David López-Idiáquez the Individuals and Populations category prize.

While Ms Hardenbol also won the People and Nature category with her picture of a nesting Black-legged Kittiwakes, a seabird considered to be a threatened species. 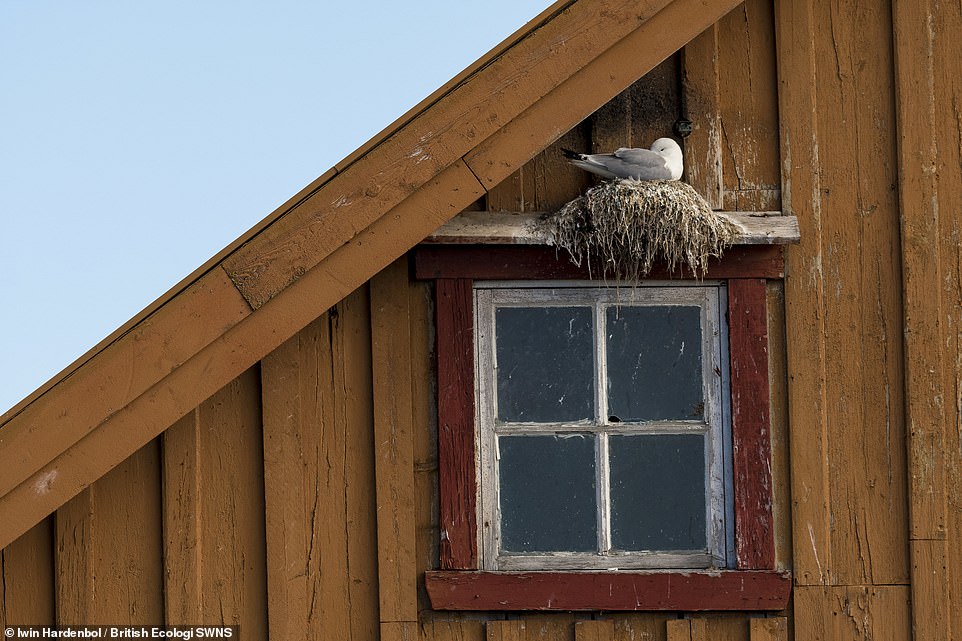 Housing for the threatened – Alwin Hardenbol. In Varanger, Black-legged Kittiwakes (Rissa tridactyla) often like to nest on decrepit buildings. It’s a quite fascinating behaviour for this internationally vulnerable bird species. Winner People and Nature 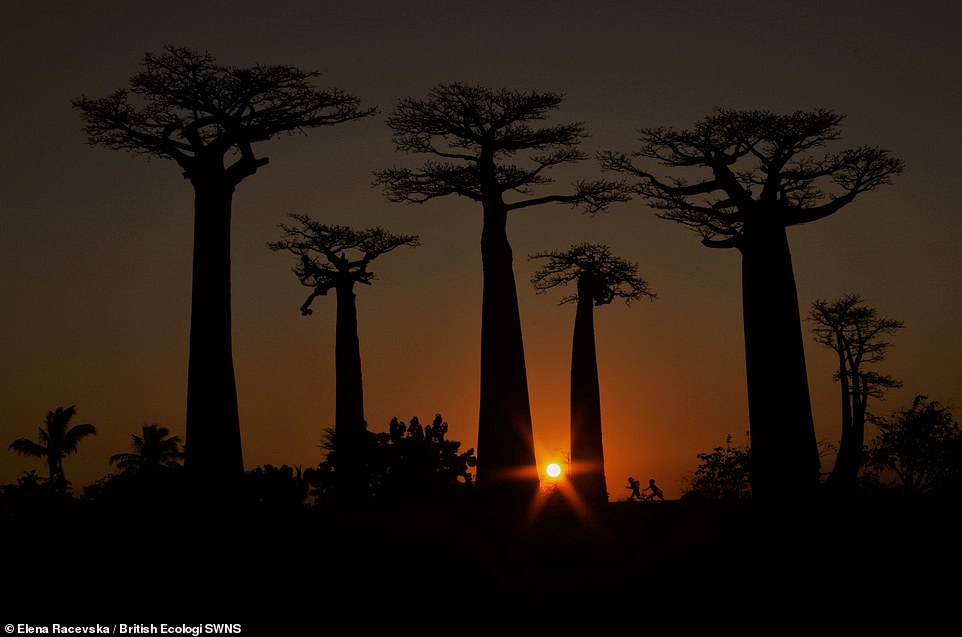 This is our playground – Elena Racevska. As the day turned to night, mesmerised tourists gathered to witness the baobabs’ grandeur amidst a deep-coloured sunset. The trees stood silent and tall, as they have for centuries. Suddenly, as if out of nowhere, two children appeared. Tumbling through this theatre of shadow and fading light. Claiming their playground. Student winner People and Nature 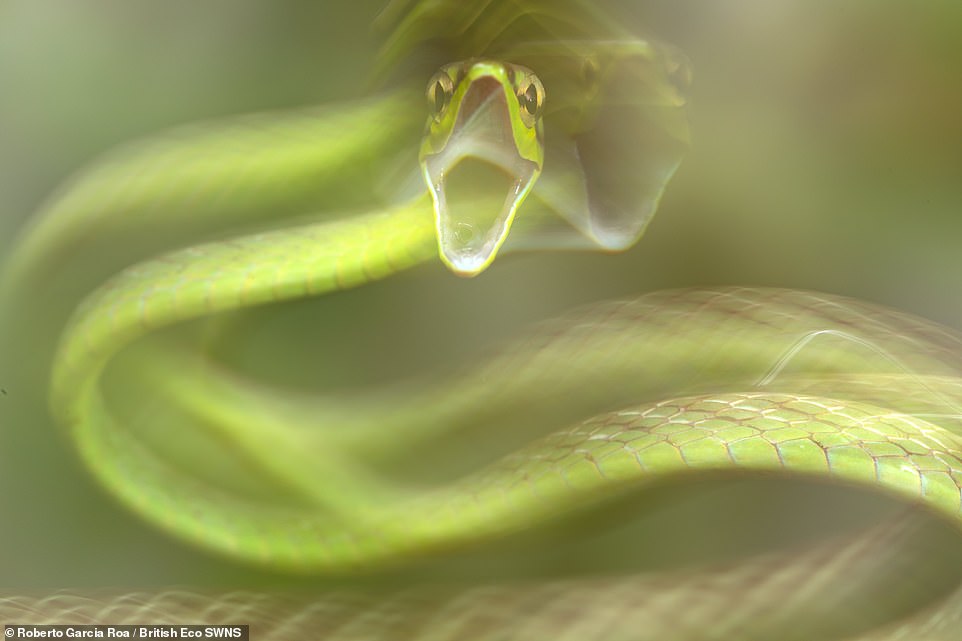 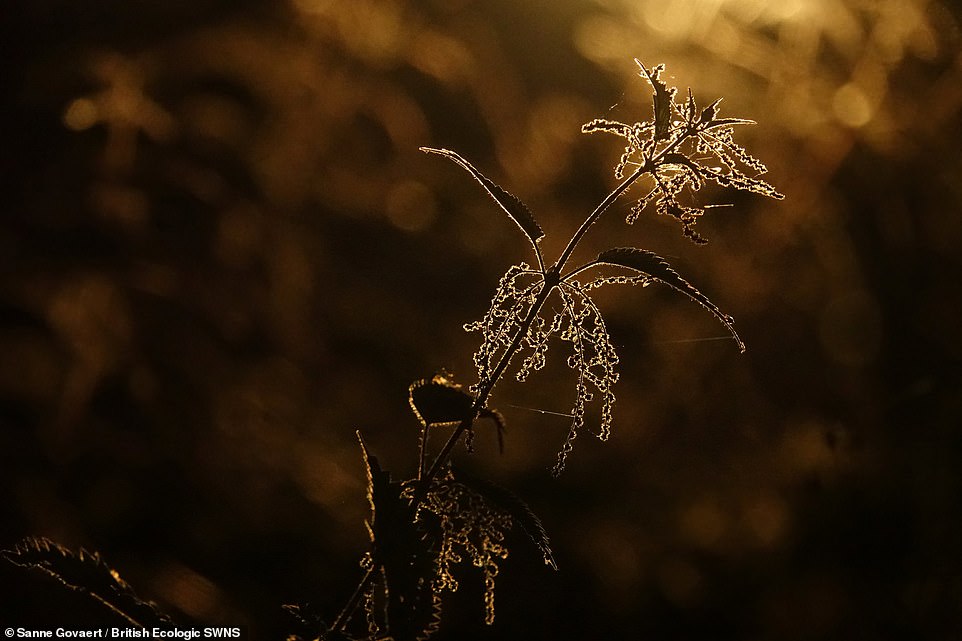 Common nettle, foe or friend – Sanne Govaert. Urtica dioica is a species often considered weeds. But beauty is in the eye of the beholder. Student winner Art of Ecology

The judging panel, made up of six ‘highly respected’ photographers, including famous ecologists and award-winning wildlife photographers, also selected 16 highly commended photographs, which didn’t quite make the shortlist.

A photograph taken by Professor Peter Hudson at Penn State University of one of his graduate students, Ellen, examining a dead wolf in Yellowstone National Park took first prize in the Ecology in Action category.

The Art of Ecology category was won by Roberto García Roa for his hypnotising picture titled ‘Mouth’, which shows a blurry Cope’s Vine Snake with it’s mouth wide open.

Wildlife photographer and judge Gabriela Staebler said: ‘The standout images show not only great photographic skills, but love and emotion for wildlife.

‘With their impact on people they will contribute to the preservation of nature.

‘Congratulations to the photographers.’ 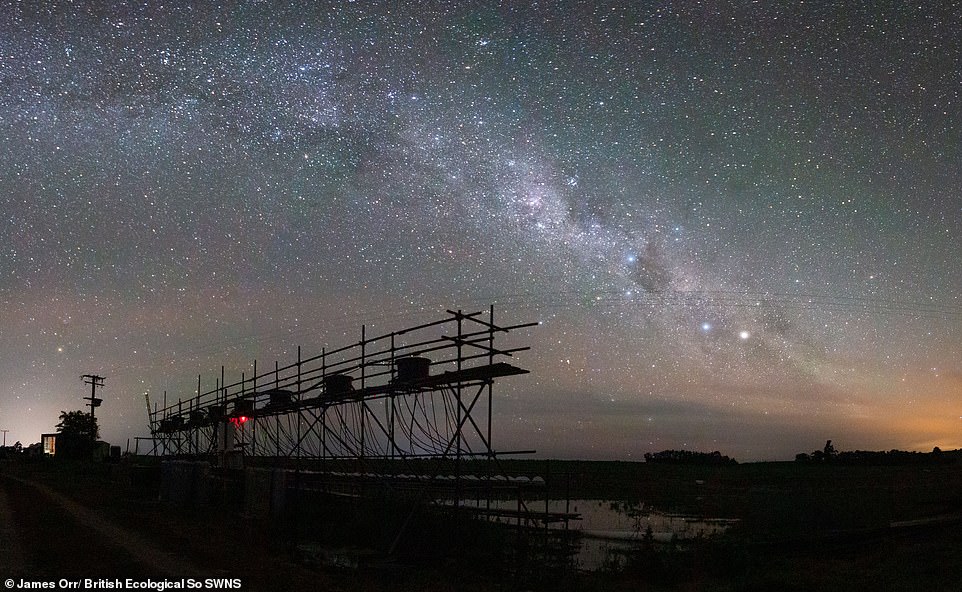 Constant Flow – James Orr. This photograph is a panorama made up of multiple long-exposure photographs of the Milky Way above an experimental stream system made up of 128 mesocosms. Student winner Ecology in Action