The fight took place in the early hours of Monday morning, on Singapore’s Hougang Avenue 9. Lucas Oh, who was sitting in a café, saw the whole thing unfold and recorded several clips which he uploaded to his Instagram story.

One of the combatants was tooled up with a potted plant, while his opponent just had a recorder. Mr Oh told the Singapore Straits Times that the rumble was prompted by one of the men staring at the other.

This would normally have escalated into a war of words but, as Lucas observed, the men didn’t have a common language to argue in.

Consequently, they went straight to the ‘pushing and shoving stage.’ When the recorder-wielding man pushed the other chap towards a large potted plant. Seizing his opportunity, and the plant, the second man began to brandish the pot aggressively. 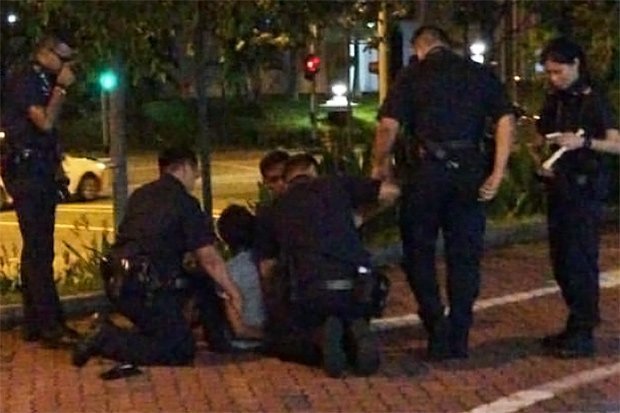 Local police said that they were alerted to a case of ‘voluntarily causing hurt’ on Hougang Street at 1.40am.

When they arrived, the man with the recorder started playing his instrument, and so a police officer confiscated it in the interest of public safety.

Both men were detained by police.

Lucas posted one last picture of the man sitting on the pavement with his hands behind his back, surrounded by police.