Reconnaissance robots that can be lobbed 148 feet over walls, or into buildings and caves to provide real-time video have been tested by the Royal Marines.

The 43 Commando Fleet Protection Group have been trialling the ‘throwbots’ — and other advanced kit — during exercises around and in the tunnels beneath Gibraltar.

The bots are built to survive falls of up to 32 feet, automatically self-right after landing and can operate for 30 minutes when submerged under 3 feet of water.

Marines could throw the robots into unknown or occupied territory in order to get an advanced ‘lay of the land’ without putting themselves directly at risk.

When not testing new field tech, 43 Commando’s responsibilities include protecting the UK’s nuclear weapons arsenal at Her Majesty’s Naval Base, Clyde, in Scotland. 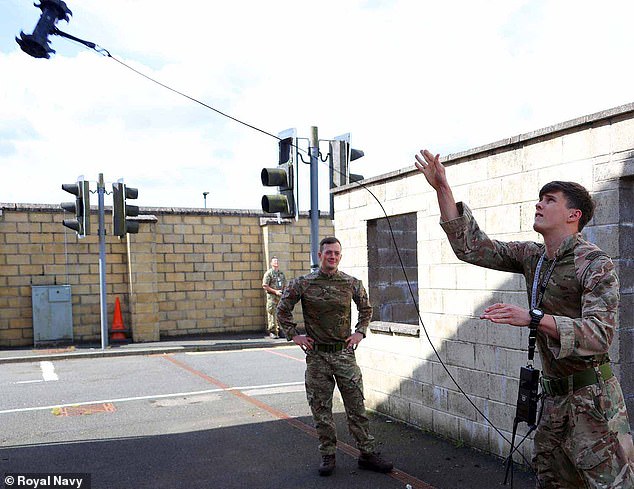 Reconnaissance robots that can be lobbed 150 feet over walls, or into buildings and caves to provide real-time video have been tested by the Royal Marines. Pictured, a member of the Royal Marines 43 Commando group lobs a tethered throwbot during tests in Scotland earlier this year. The soldiers have since moved to field tests in and in the tunnels beneath Gibraltar 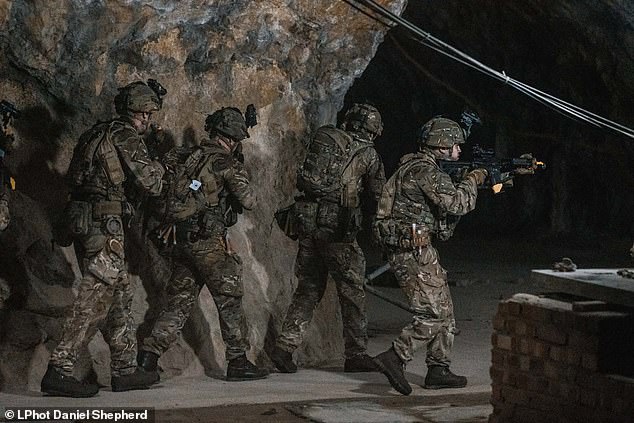 The 43 Commando Fleet Protection Group have been trialling the ‘throwbots’ — and other advanced kit — during exercises around and in the tunnels beneath Gibraltar, pictured

Resembling a sort-of dumbbell with a tail, each throwbots sports two large all-terrain wheels and a central, gyroscopically-stabilised video camera.

After landing on the ground, the bot’s onboard systems take only two seconds to recalibrate, after which it can be driven around by remote control by an operator.

Each throwbot would be directed by a dedicated operator who would, in turn, themselves be protected by the other members of the commando unit during field manoeuvres.

In open ground, the robot can be operated from a distance of up to 450 feet — or from up to 150 feet away in an enclosed setting like a building or cave complex.

Each throwbot can relay real-time video footage back to its operator — across a 60° field of view — at a rate of 30 frames per second, along with corresponding audio recorded by on-board sensors

The field tests of the throwbots and other new technology form part of the Ministry of Defence’s so-called Future Commando Force project — which aims to deploy the lethality of a traditional company of 120 troops, but with significantly less soldiers.

The Royal Marines, for example, believe that — with the right equipment — they can achieve this goal with a squad of only 12 commandos.

This tech support will need to provide not only surveillance information but also autonomous support for the soldiers.

Defence chiefs are also reported to be interested in the potential application of machine learning to the battlefield — especially given the likelihood, as the costs of such software continues to fall, that enemy agents will deploy AI as well.