Mastodons travelled northwards across large distances in North America due to climate change around 800,000 years ago, a new study suggests.

During the more temperate periods, mastodons headed north to feed on vegetation that had flourished after a big thaw, Canadian researchers say.

But as temperatures got colder and large glaciers started to spread down from the top of the continent, the creatures retreated back down south.

This was a constant cycle that took place during the erratic cold spells of the Pleistocene period, which spanned from 2.5 million to 11,700 years ago.

The experts, who reconstructed DNA from fossilised mastodon samples including teeth, tusks and bones, say their findings could be useful for modern conservation science. 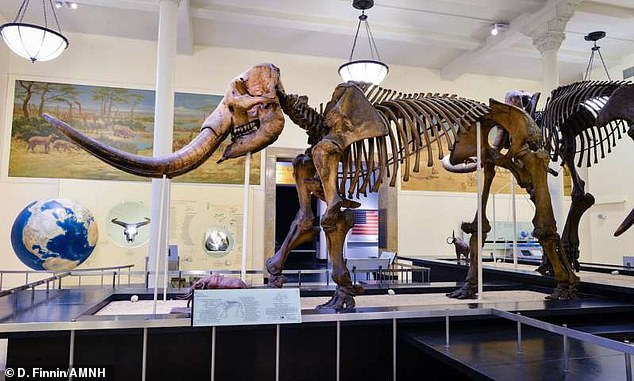 The Warren mastodon, which was the first complete American mastodon skeleton found in the US, on display at the American Museum of Natural History. American mastodons migrated vast distances across North America in response to dramatic climate change

Today, creatures like moose and beavers are now heading northwards by tens of miles every century to find the optimum temperature in response to climate fluctuations.

‘The genetic data show a strong signal of migration, moving back and forth across the continent, driven what appears to be entirely by climate,’ said study author Hendrik Poinar, director of the McMaster Ancient DNA Centre in Canada.

‘These mastodons were living in Alaska at a time when it was warm, as well as Mexico and parts of Central America.

‘These weren’t stationary populations – the data show there was constant movement back and forth.’

Mastodons, which belong to a group closely related to modern-day elephants and extinct mammoths, were among the largest living land animals on Earth at the time, reaching lengths of 10 feet and weighing 8 tonnes or more.

Illustration shows a single glacial cycle, showing the change from glacial (b) to interglacial (c) conditions, followed by a fall back into another glaciation (d). Mastodons were able to occupy most of eastern Beringia and Canada during interglacials (e), but progressively extirpated from these regions as conditions descend into the next glacial period (f)

The species went extinct about 11,000 years ago around about the end of the the Pleistocene period, along with other large mammals such as mammoths, sabre-toothed cats and giant ground sloths.

Pleistocene was characterised by cold glacial periods interspersed with warmer periods during which ice sheets would retract.

During these warm ‘interglacials’, previously frozen regions grew new forests and wetlands that provided new food sources for animals like the mastodon, enticing them northward.

Cycles of glacial and interglacial periods over the last 800,000 years resulted in periodic expansion of the ice sheet across approximately 50 per cent of the habitable land in North America.

Mastodon fossils discovered previously in northern climates had indicated that the species likely had a large range.

But scientists were unsure when these migrations happened and whether mastodon populations took repeated trips or only went once.

To find out more, the researchers reconstructed complete mitochondrial genomes from the fossilised teeth, tusks and bones of 33 mastodons.

Ancient DNA recovered from fossil bones and teeth that hint at different types of vegetation, based on oxygen isotopes.

This enables experts to examine the location of extinct species and their movements over long periods of time.

‘These methods can provide a nuanced understanding of responses (e.g., migration and extinction) to climatic stressors during the Pleistocene, and have already revealed demographic trends that are not easily recovered with traditional palaeontological techniques,’ the team say in their study.

Two originated from eastern Beringia, a region that historically adjoined Russia and America. 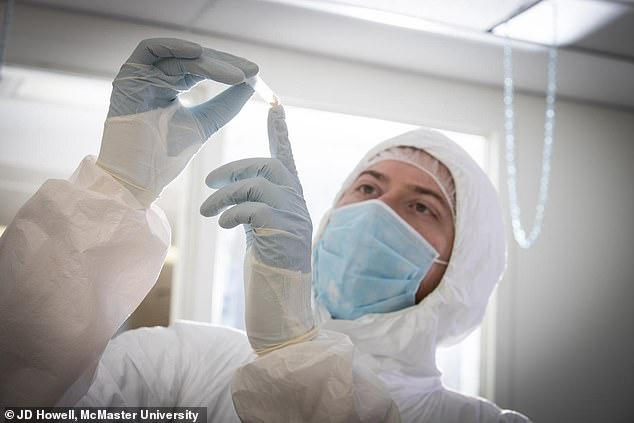 The authors found no overlap in the ages of the specimens from the eastern Beringia groups and suggest that the two clades likely resulted from separate expansions into this region.

This coincided with interglacial periods when warm climatic conditions supported the establishment of forests and wetlands, they say.

The results show that the animals travelled extreme distances in response to warming climate conditions and melting ice sheets, from warmer environments to the northernmost parts of the continent.

Examining how different Pleistocene creatures responded to climate transitions can provide valuable information on how global warming is affecting modern-day species in the north. 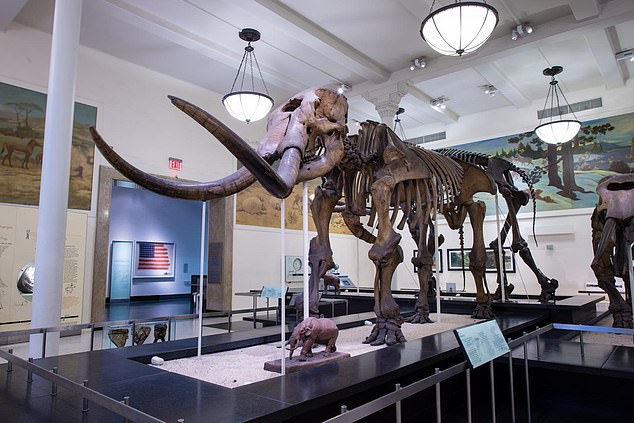 ‘By looking genetically at these animals which lived for the last 800,000 years, we can actually see the make-up of these populations that made it up to the north,’ said lead author Emil Karpinksi at McMaster University.

‘It’s really interesting because a lot of species presently, like moose and beaver, are rapidly expanding their range northwards by as much as tens to hundreds of kilometres every century.’

However, mastodon populations that headed northward to the Arctic during warm periods were less genetically diverse, making them vulnerable to extinction.

‘That is always a danger signal for vertebrate species,” said Grant Zazula, an author on the study and paleontologist with the Government of Yukon in Canada.

‘If you lose genetic diversity, you are losing ability to respond to new conditions.

‘In this case, they were not up there long enough to adapt to northern conditions when they cycled back to cold.’

The study has been published in Nature Communications.

WHY DID THE MASTODON GO EXTINCT?

Radiocarbon dating of North American fossils suggests mastodons died out before humans could hunt them to extinction.

Humans have long been blamed for hunting the American mastodon – an ancient relative of the elephant – to extinction.

Experts are still not certain why the animals died out, but now think that changing habitats from forests to tundra could have played a role.

Arctic and Subarctic were only temporary homes to mastodons when the climate was warm, according to the new international study

But new data suggests that mastodons became extinct in pockets of eastern Beringia around 75,000 years ago, following a habitat change from forest to tundra.

Mastodons occupied high latitudes between 125,000 and 75,000 years ago when it was covered with forests.

But ecological changes led to habitat loss and population collapse.

After this, mastodons were limited to areas south of the continental ice sheets where they suffered complete extinction over 10,000 years before the first humans crossed the Bering Strait – or the onset of Pleistocene climate changes.

The study says that local extinction of mastodons were ‘independent; of their later extinction south of the ice.