Meat-eating dinosaur could replace its teeth as fast as SHARKS — regrowing them every two months, study reveals

A meat-eating dinosaur could replace its teeth as fast as a present day shark — growing replacement gnashers every two months, a study has found.

Researchers studied the teeth of the Majungasaurus, which lived in what is now Madagascar around some 70 million years ago.

Its tooth replacement rate was up to 13 times that of other prehistoric carnivores — putting it in same league as sharks and big, herbivorous dinosaurs.

Experts believe that the dinosaur species developed rapid-fire tooth growth because it wore down its teeth by gnawing on bones.

A meat-eating dinosaur (Majungasaurus, right) could replace its teeth as fast as a present day shark — growing replacement gnashers every two months, a study has found. Left, the skull and teeth of a Ceratosaurus, which researchers analysed for comparison

‘There is independent evidence for this in the form of scratches and gouges that match the spacing and size of their teeth on a variety of bones – bones from animals that would have been their prey,’ said Adelphi University biologist Michael D’Emic.

He noted that today’s animals — including rodents, for example — gnaw on bones.

‘It’s a way for them to ingest certain nutrients. It also requires exceptionally strong teeth – but Majungasaurus did not have those,’ Professor D’Emic added.

‘That’s our working hypothesis for why they had such elevated rates of replacement.’

The researchers also examined two other species of predatory dinosaur — the Allosaurus and Ceratosaurus — enabling them to consider tooth growth patterns more broadly.

In particular, Dr D’Emic teamed up with Ohio University anatomy expert Patrick O’Connor in order to examine microscopic growth lines in the teeth taken from a fossil collection.

He likened these growth lines to tree rings, albeit ones that are deposited daily, instead of but once a year. 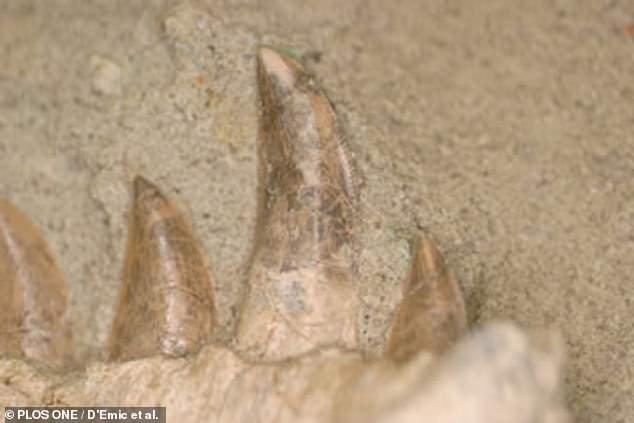 Researchers studied the teeth  of the Majungasaurus, which lived in what is now Madagascar around some 70 million years ago 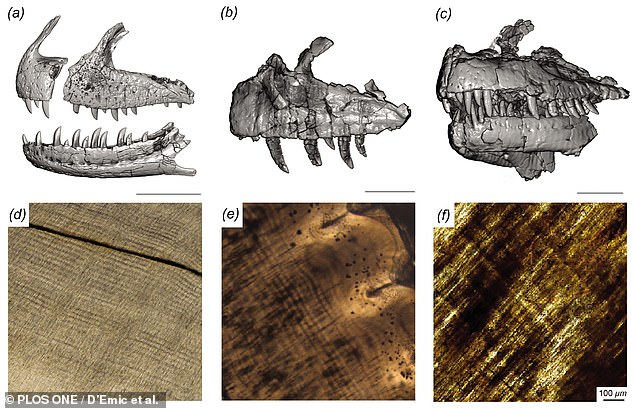 Majungasaurus’ tooth replacement rate was up to thirteen times that of other prehistoric carnivores — putting it in same league as sharks and big, herbivorous dinosaurs. Pictured, CT-scan images (top) and microscopic close-ups of teeth showing growth lines for Majungasaurus (left), Ceratosaurus (centre) and Allosaurus (right)

This allowed them to estimate how quickly the teeth would grow in a large number of individual jaws, so they could cross-check their results.

‘This project addresses yet another aspect of the biology of Majungasaurus, and predatory dinosaurs more generally,’ he added.

‘It heralds the next phase of research based on recent field discoveries.’