Melania Trump has been under the spotlight ever since her hubbie Donald Trump became President of the United States in January 2017.

From weird handshakes, cold stares and mysterious absences – the public’s interest in FLOTUS has risen and risen over the past few years.

But it is one particular conspiracy surrounding Melania that perhaps tops every other story about her – that she uses a body double in public.

Even her husband was forced to address the conspiracy with a tweet slamming the “fake news”.

“That is not Melania Trump”

And the theory has exploded once more with a viral video posted on Wednesday.

The clip shows Trump addressing reporters over suggestions the House of Representatives will be issuing subpoenas into his administration.

To the right of the screen stands a stony-faced Melania, who remains motionless for the majority of the clip before turning towards the cameras.

“I have never believed in a conspiracy more than the one that Melania was killed and replaced by a stand-in,” one wrote.

“Who the hell is that?! That is not Melania Trump.” 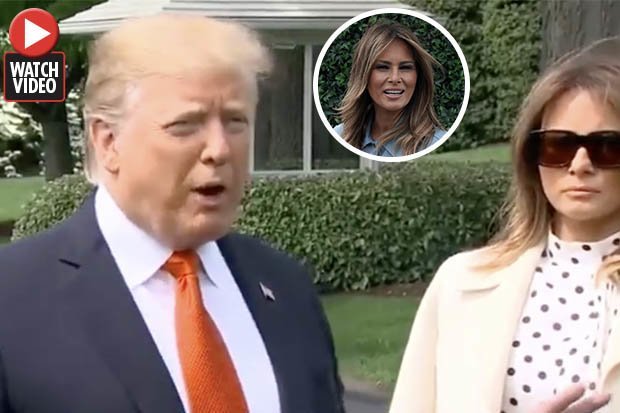 Another commented: “Who is that woman standing behind Trump because it is straight up not Melania?”

And a third added: “I am not a conspiracy theorist but this is really weird.”

But it is not the first time the wacky theory has surfaced.

As Melania celebrates her 49th birthday today, Daily Star Online has dug up some of the most bizarre clips of FLOTUS’ “body double”.

Donald forgets Melania is next to him

Being married to someone for 14 years tends to suggest you recognise that person if they are standing next to you.

But apparently that is not the case, as Trump infamously showed back in September 2017.

Speaking at a military facility near Washington DC, US, he told spectators that “Melania really wanted to be with us” – despite FLOTUS very clearly standing alongside him.

Unless, of course, it was her “body double” that was present.

Trump’s tour of Europe in July 2018, including his first ever visit to the UK, was a landmark event given how much uproar there was before his visit.

But it was Melania that stole the show before they had even touched down on UK shores.

Footage by Fox News showed FLOTUS’ hair being pummelled by wind as she stepped out of Air Force One during a stop in Brussels.

She wasn’t wearing her customary sunglasses and appeared to have slightly less make-up – which was enough to convince the conspiracy world that the figure before them was most certainly not Melania.

Another added: “Watching the interview with Trump as he left the US, Melania looks like a body double. It is not her.”

A viral video showed Melania – dressed in a white skirt and jacket with a black and white dotted shirt – following behind her husband.

But many claimed she appeared to be walking differently – which obviously meant it must have been another woman altogether.

“Person here walks with her arms brushing her hips all the time,” one wrote.

“Melania doesn’t do that, she walks with arms away from hips.”

Another said the “body double” appeared to be larger than the former model, saying: “It’s a body double that weighs a good 20lbs (9kg) more.

“You can see it in the round face and the ‘tummy’.”

Just last month, the conspiracy resurfaced once again as Melania accompanied her husband to a memorial.

An image – and subsequent video – showed the 49-year-old standing next to Donald looking visibly glum.

But Twitter users were more concerned by the fact – they claimed – Melania looked absolutely nothing like her usual self.

One commented: “A body double for public appearances? How is this an acceptable practice? Seriously. There’s a whole different level of bizarre with this family.”

“I genuinely think there is a chance he has no idea it’s not her,” another added.