Methane seas on Saturn’s largest moon Titan are unusually calm because of a thin floating layer of organic ‘goop’ that stops waves from forming on their surface, scientists say

Titan is Saturn’s largest moon and has vast seas full of methane which are exceptionally calm due to an organic layer that sits on top of it, scientists claim.

The orange goop is made of chemicals which fall from the moon’s sky, react in the seas and form a subduing layer atop the seas which prevent waves from forming.

Precipitation on the surface of the mysterious moon is a phenomena which is currently being explored by scientists to understand more about Titan.

Data from NASA’s kamikaze Cassini mission continues to come to light after it took detailed analysis and pictures of Saturn, its rings, and some of its major moons – including Titan.

It is the only body in the solar system, except for Earth, which is known to have stable liquid matter. 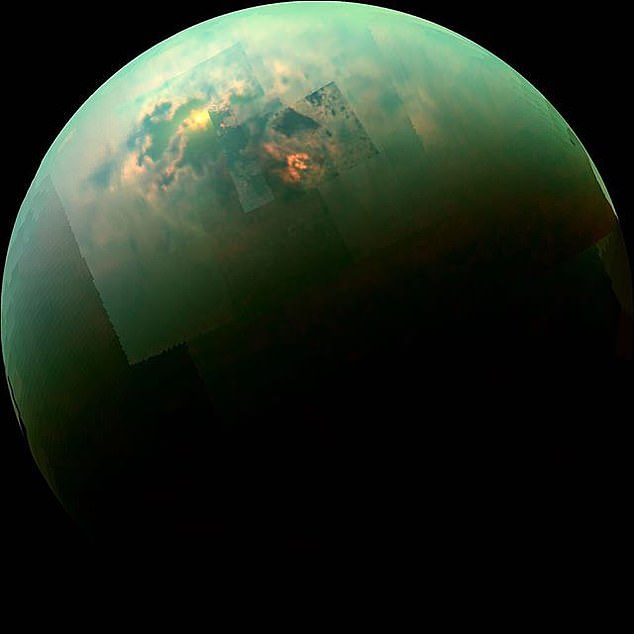 Beyond our planet, Titan (pictured in near-infrared, as seen by NASA’s Cassini spacecraft) is the only solar system body on the surface of which liquid matter can be stable. Now experts believe they are exceptionally still due to a subduing layer of organic compounds

Researchers based at the University of Reims Champagne-Ardenne and University of Versailles Saint-Quentin, both in France, assessed how this layer affects the seas.

Liquid alkanes, the family which includes methane and ethane, are abundant on Titan and form a range of compounds, including hydrogen cyanide.

The researchers believe these may form a thin layer over the seas and act as a dampener.

Waves on Saturn’s moon would be less intense than on Earth even without the dampening layer.

They are also easier to calm down as the liquid is less dense than water – as on Earth – and Titan is smaller and has a weaker gravitational pull, leading to weaker waves.

Shannon MacKenzie at Johns Hopkins University in Maryland, told New Scientist: ‘There have sadly been quite a few oil spills on Earth, and investigations have found that those actually damp waves.’

She added that Titan’s layer would likely resemble a patch of sand more than a Earthly oil spill due to the concoction of chemicals believed to be involved.

The layer doesn’t have to be thick, the researchers claim in their study, accepted for publication in Nature Geoscience and currently available on arXiv.

Daniel Cordier who conducted the research said even just a one molecule thick crust would have a substantial dampening effect. 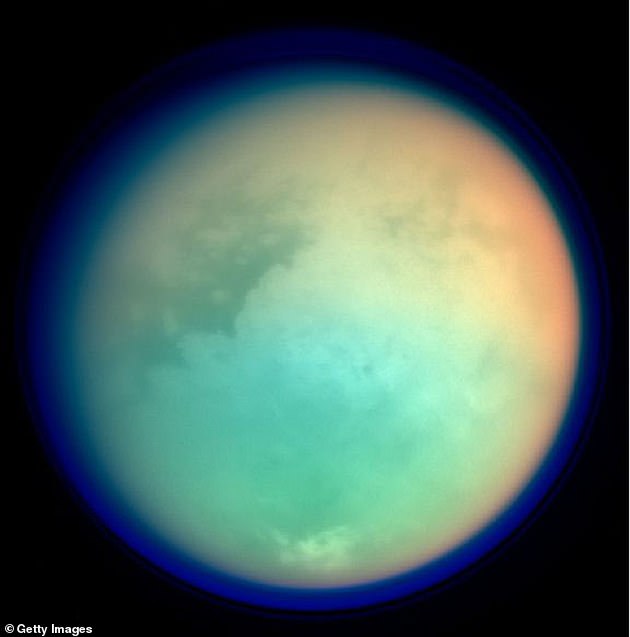 Liquid alkanes, the family which includes methane and ethane, are abundant on Titan (pictured) and form a range of compounds, including hydrogen cyanide. The researchers believe these may form a thin orange layer over the seas and act as dampener

He added: ‘Of course if the deposit is thicker, the wave damping effect will be more important.’

Their research modelled how different thicknesses of the layer would impact the waves and found the dampening effect would be stronger for ripples with a wavelength of just a few centimetres.

This stops the formation of larger waves and keeps a tranquil appearance for the most part, they found.

The dampening of the seas stops when the downpour of chemicals stops, which is rare but does happen.

Larger ripples have been spotted in areas and times when the methane rain stops.

Just as the surface of oceans on Earth lie at what we call ‘sea level,’ Titan’s seas also lie at an average elevation.

It is currently the only other world we know of in our solar system that has stable liquid on its surface.

Smaller lakes on Titan appear at elevations several hundred feet higher than Titan’s sea level. This is similar to lakes found on Earth at high elevation.

For example, the Earth’s highest lake navigable by large ships, Lake Titicaca, is over 12,000 feet [3,700 meters] above sea level.

Titan’s liquid bodies appear to be connected under the surface by something akin to an aquifer system on Earth.

Hydrocarbons seem to be flowing underneath Titan’s surface similar to the way water flows through underground porous rock or gravel on Earth.

This means nearby lakes communicate with each other and share a common liquid level.

Aside from Earth, Titan is the only place in the solar system known to have rivers, rainfall and seas – and possibly even waterfalls.

Of course, in the case of Titan these are liquid methane rather than water on Earth.

With its thick atmosphere and organic-rich chemistry, Titan resembles a frozen version of Earth several billion years ago, before life began pumping oxygen into our atmosphere.

Because Titan is smaller than Earth, its gravity does not hold onto its gaseous envelope as tightly, so the atmosphere extends 370 miles (595km) into space.