Home » Science » Mice with two MOTHERS are born in China

Baby mice have been born to two mothers in a breakthrough study that could spell hope for gay couples who want their own biological children.

Twenty-nine healthy mice were created by scientists using DNA taken from two mouse eggs – without sperm from a father.

The young pups grew into healthy adults and even had healthy children of their own.

Scientists said the technique could one day create humans whose biological parents are two women, or two men.

Mice from two fathers were also born but survived just 48 hours, with some sporting gruesome genetic mutations such as long tongues and oversized bodies.

Experts behind the study, who used stem cells and gene editing to spawn the mice, said it represented a ‘breakthrough’ in our understanding of mammal biology. 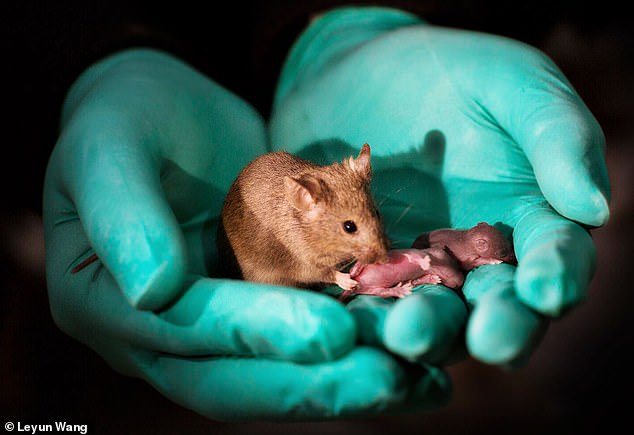 Baby mice have been born to two mothers in a breakthrough study that could spell hope for gay couples who want their own children. Pictured is a mouse born from two mothers (left), who grew into a healthy adult and had pups of her own (right)

HOW DID SCIENTISTS CREATE SAME-SEX-PARENT MICE?

Researchers in China have created mice using DNA from two mice of the same sex.

They produced 29 healthy mice by combining genes from two females.

They used DNA from two males to create 12 mice, but they died just 48 hours after they were born.

The cells were edited to remove parts of DNA that normally block reproduction using only male or female genes.

In the case of the ‘mum only’ mice, the researchers injected edited stem cell directly into the egg, which was then implanted into another female mouse.

The ‘dad only’ mice required a more complicated procedure.

This involved injecting edited embryonic stem cells from one father into an egg cells alongside sperm from a second father.

The egg cells had its DNA removed, meaning no female genes made it into the eventual offspring.

Dr Teresa Holm of the University of Auckland, who was not involved in the study, called the research ‘an important advance’ and said it boosted our understanding of genetic imprinting.

She added that the technique could one day lead to technology that allows gay couples to have children who share both partners’ DNA.

She said: ‘In the long-term, this knowledge may help researchers improve assisted reproductive technologies for infertile couples where disturbances in imprinting may contribute to the health of artificially fertilised embryos.

‘It may even lead to the development of ways for same sex couples to reproduce healthy children of their own.’

The study, from researchers at the Chinese Academy of Sciences in Beijing, looked at what makes it so challenging for animals of the same sex to produce offspring.

It suggests that some of these barriers can be overcome using modern genetic technology.

Scientists created the same-sex-parent mice using ‘haploid’ embryonic stem cells, a type of cell with half the normal number of chromosomes.

While some reptiles, amphibians, and fish can reproduce with one parent of the same sex, it is challenging for mammals to do the same, researchers said. 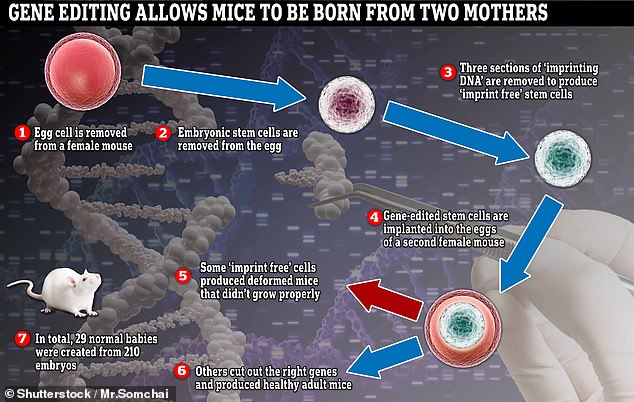 Pictured is the process used to create mice using the DNA from two females. Embryonic stem cells were taken from a female egg and edited to remove certain sections of DNA. These cells were then implanted into an egg from a second female, who brought the mice to term

This is because certain genes are shut off during development if the DNA is not from both a male and female – a safety mechanism coded for by ‘imprinting’ genes.

The stem cells were edited to delete three regions of imprinting DNA and injected into an egg from a second mother, who carried the embryos to term.

WHAT ARE STEM CELLS?

Stem cells are a basic type of cell that can change into another type of more specialised cell through a process known as differentiation.

Think of stem cells as a fresh ball of clay that can be shaped and morphed into any cell in the body – including bone, muscle, skin and more.

This ability means they have been the focus of lots of medical research in recent decades.

They grow in embryos as embryonic stem cells, helping the rapidly growing infant form the millions of different cell types it needs to build before birth.

In adults they are used as repair cells, replacing those we lose through damage or ageing.

In total, they produced 29 live mice from 210 embryos – all from the two-mother experiments.

The mice were normal, lived to adulthood, and had babies of their own. 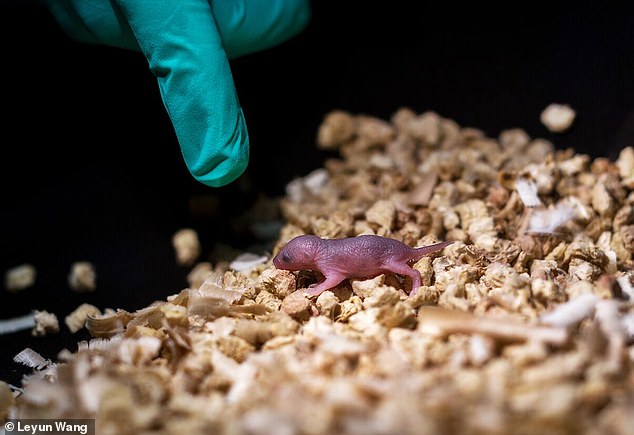 Pictured is a mouse born to two fathers as part of the study. Mice created using this technique survived just 48 hours, with some sporting gruesome genetic mutations such as long tongues and oversized bodies

They then injected the edited cells into an egg alongside a sperm from a second male.

The egg, which was later implanted into a female mouse, had all of its DNA removed before the injection, meaning no female genes went into the embryos.

None of the two-father mice survived beyond 48 hours, and some were oversized or had long tongues due to genetic defects. 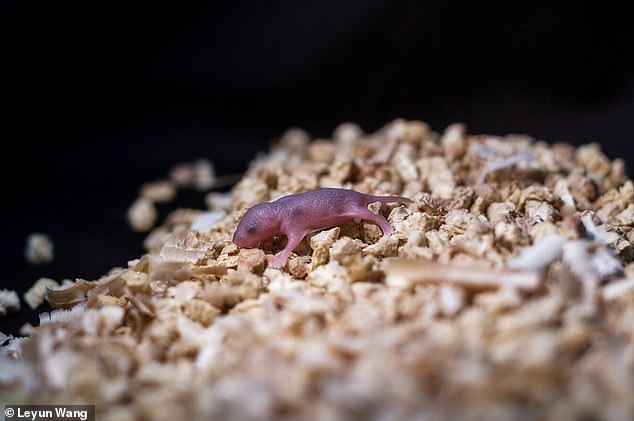 This image shows a mouse pup born to two fathers. Scientists said the technique could one day create humans whose biological parents are two women, or two men

The researchers are planning to improve the process so that the two-father mice live to adulthood.

They said that one advantage of using haploid embryonic stem cells is that even before the problematic genes are knocked out, they contain less imprinting DNA.

The research is reported in the journal Cell Stem Cell.

Dr Christophe Galichet, a senior geneticist at The Francis Crick Institute in London, said technical difficulties confronting anyone who attempted to adapt the technique for humans remained ‘unthinkable’. 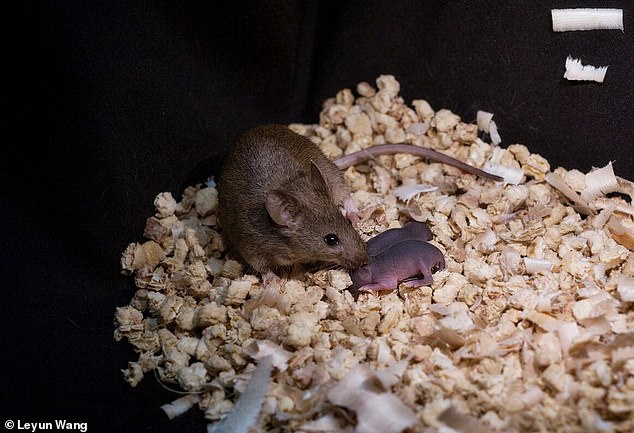 Twenty-nine healthy mice were created by scientists using DNA taken from two mouse eggs – without sperm from a father. The young pups grew into healthy adults  (left) and even had healthy children of their own (right)

He said: ‘The authors have made an extremely important step forward in understanding why mammals can only reproduce sexually.

‘In mammals, some genetic information must be given by mum or dad chromosome in order to generate an offspring.’

But he added: ‘It is not known if the imprinted regions that were deleted in mice are the same in human.’

Robert Norman, a reproductive expert at the University of Adelaide, said: ‘The concept is intriguing for human reproduction, particularly for same-sex couples.

‘But there are far too many uncertainties at present to attempt such an approach for many years to come.’