Microsoft will release the latest edition of its famous Flight Simulator software for PC later this month with ultra lifelike graphics – but it will require a massive 150GB of free storage to install it.

The software will make use of satellite maps from Bing as well as live readings from weather stations and airports around the world to create ‘the most realistic’ version of the game ever developed.

Users simply upload their desired destination and use the ‘realistic’ training system to navigate the area – the simulator is set to be released for PC on August 18, Xbox shortly after and VR later this year.

The simulator lets ‘pilots’ sit in a realistic cockpit, allowing them to learn the ins and outs of a real airplane and travel from or to more than 40,000 real-world airports and visit sites between them.

Now you can soar above the New York skyline (pictured), whiz by machu picchu and fly over giraffes in Africa without leaving your home

According to Microsoft it will include live traffic, real time weather and moving animals to reflect the fact Earth is a ‘living world’.

It’s not just the world that will be detailed, according to the firm the aircraft – from light planes to commercial jets – will be highly detailed with accurate cockpits and realistic instrumentation.

‘Microsoft Flight Simulator is the next generation of one of the most beloved simulation franchises,’ Xbox shared on its website.

‘From light planes to wide-body jets, fly highly detailed and stunning aircraft in an incredibly realistic world. Create your flight plan and fly anywhere on the planet.’

First released in 1982, the game has provided wannabe pilots with a realistic training system that lets them explore the world without having to leave their couch.

The last version of the simulation was launched in 2014 – but now Microsoft has redesigned the game with the latest technology. 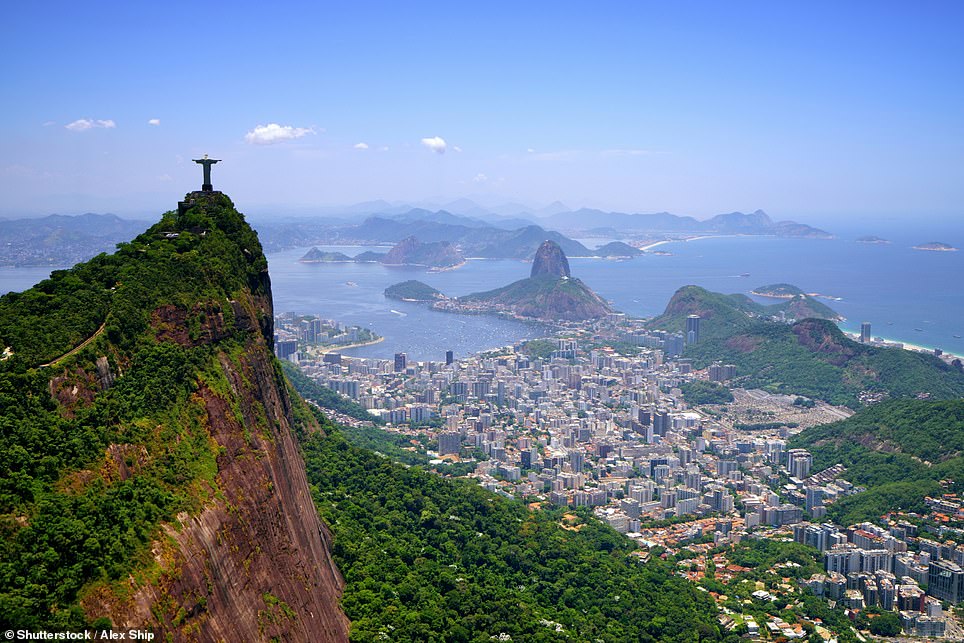 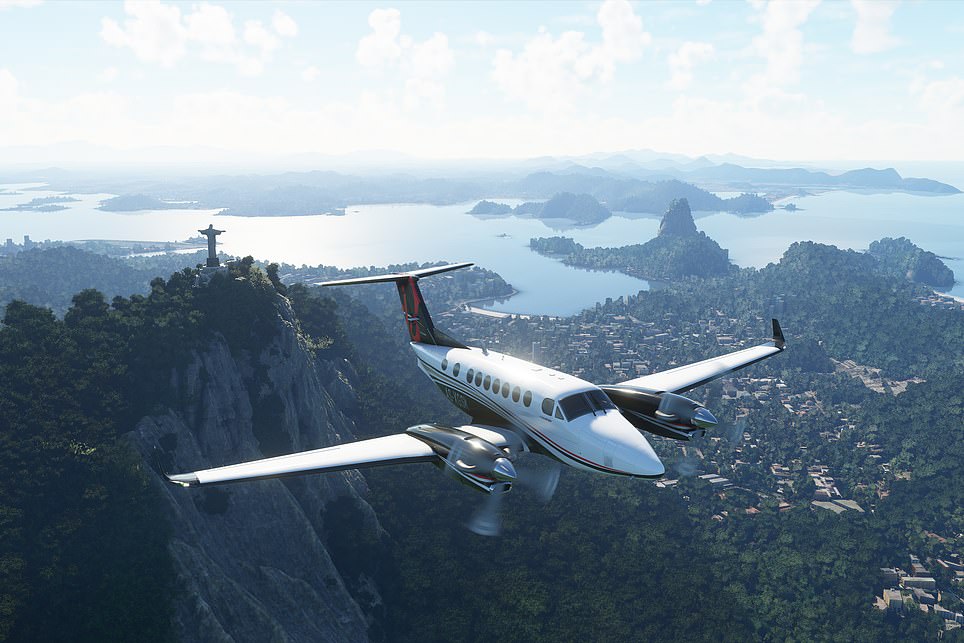 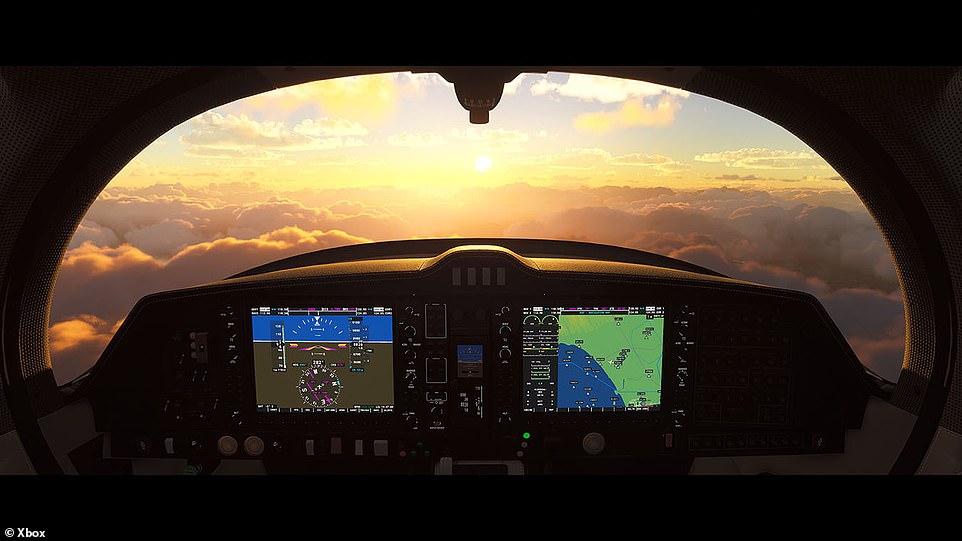 The system has harnessed the power of machine learning, pulled satellite data from Bing Maps and uses Azure cloud system to make sure every landmark is exact, every skyscraper in its exact place and everything is displayed into frame in 4K

In Flight Simulator, Asobo’s technology is digitizing 196.9 million square miles of land, such as the plains in Africa (pictured), man-made landmarks and open sea area 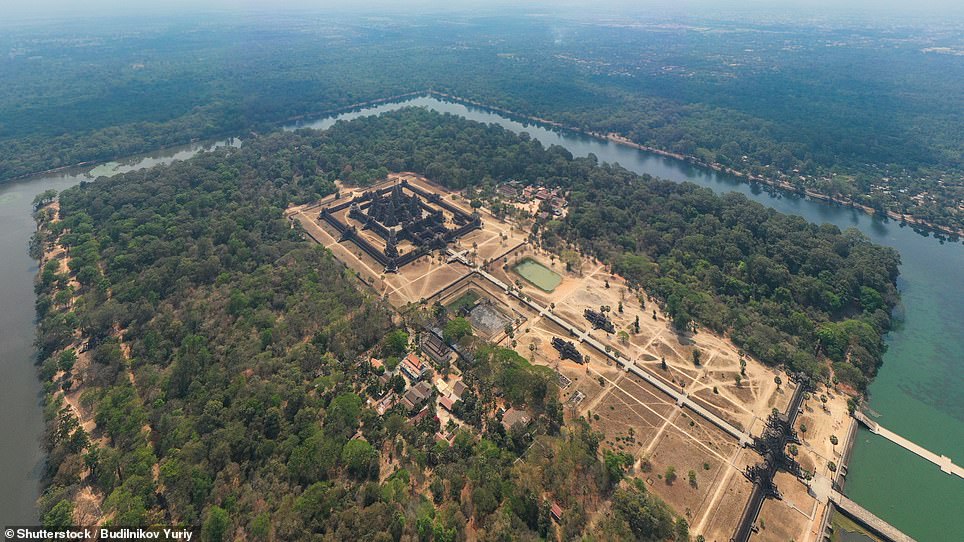 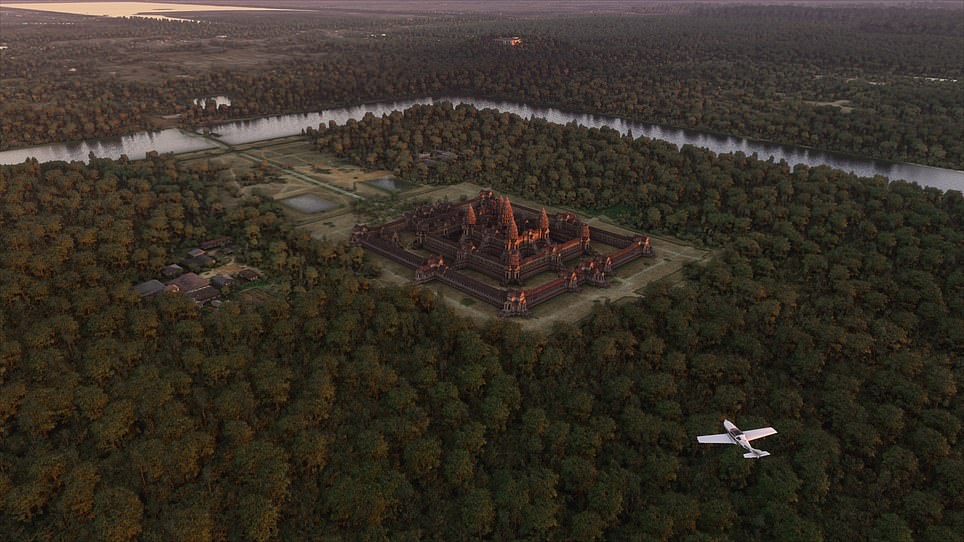 You’ll be able to fly over landmarks such as Angkor Wat. Right is the flight simulator version and left is the real world

There will be three editions of Microsoft Flight Simulator available at prices ranging from $59.99 to $119.99 depending on the number of airports and aircraft you want to be able to use.

‘Your fleet of planes and detailed airports from whatever edition you choose are all available on launch day as well as access to the ongoing content updates that will continually evolve and expand the flight simulation platform,’ Microsoft wrote in a blog post.

The system has harnessed the power of machine learning, pulled satellite data from Bing Maps and uses Azure cloud system to make sure every landmark is exact, every skyscraper in its exact place and everything is displayed into frame in 4K.

Microsoft has also teamed up with Asobo Studio, which is the firm behind Fuel – the 2009 open-world racing game that awarded a Guinness Book world record for having the ‘largest playable area in a console game.’

In addition to Asobo, Microsoft has also employed the help from third-party companies such as airports and weather data providers in order to have live information available to users.

‘After Flight Simulator X, frankly, I think we just got more and more focused on Xbox and essentially just divested the team at the time,’ Microsoft’s head of Flight Simulator, Jorg Neumann, told The Verge.

‘Why did we take so long to come back? Honestly, I’ve been at Microsoft for a good long time, and the desire to make another flight sim was truly always there.

‘And people talked about it in the hallways, but it was always, ‘What are we going to add? What do we have to say? You know, can we actually make a meaningful step forward?”

A new weather engine built into Flight Simulator will pull in real world data including wind speed, direction, temperature, humidity and rain – and can even show natural disasters such as hurricanes.

Before a preview event in 2019 Hurricane Dorian made its way through the Bahamas, which sat over the island for a few days and the Microsoft team were able to ‘virtually fly through it’ to experience the eye of the storm.

Vivid and Detailed Landscapes – Immerse yourself in the vast and beautiful world that is our planet with more than 37 thousand airports, 1.5 billion buildings, 2 trillion trees, mountains, roads, rivers and more.

A Living World – Earth is vibrant and ever-changing and so is the world of Microsoft Flight Simulator which includes live traffic, real-time weather and animals.

Highly Detailed Aircraft – Hone your pilot skills in a variety of aircraft from light planes to commercial jets with comprehensive flight models. Every aircraft includes highly detailed and accurate cockpits with realistic instrumentation.

New Checklist System – From pro to beginner, scale your level from full manual to full assist with interactive and highlighted instrument guidance and checklist.

Aerodynamic Modeling – A state-of-the-art physics engine with over 1,000 control surfaces per plane allows for a truly realistic experience.

This means players will be able to see a breakdown of actual flights departing and arriving at any airport on the globe, and experience natural disasters as they happen, from a safe, digital distance.

Most of the buildings and landmarks are hand-created as they can’t be generated using AI, which means more common and popular areas such as major cities are more detailed than others.

‘I think we’re going to get there pretty much everywhere,’ Neumann told The Verge.

‘Commercial planes don’t fly everywhere, and some areas of the world are considered a little bit more remote. But those are actually the areas I’m going to focus on because you know western Europe and the US is good, right?’

They are planning to focus next on areas aviation ‘hasn’t really gone’, places with fascinating terrain that isn’t really accessible by commercial aircraft.

‘I spend a lot of time in Africa right now. I like flying around because it’s cool. And I just think we’re taking the industry of flight simming forward if we bring those areas up in quality because it’s been neglected,’ he said.

The initial version of Microsoft Flight Simulator will be fairly technical with a focus on the more experienced flight sim users, but it is expected that will change over time as Microsoft says it is ‘in for the long-haul’.

Neumann said they decided from day one of the new project that they would be ‘in it to stay’ as they can’t just make a product that is a major hobby for many people then ‘do something else’.

‘That is not how this works. We’re taking on a responsibility here for a hobby, and people trust us and we know that. It is our oldest franchise in the company. It is older than Windows and Office. It has a special place,’ he said.

Future updates will include downloadable content bundles and other changes that will enhance the way the game works and how users interact with it.

‘One of the exciting implications of this is that the data that makes up the world is always improving, and players can look forward to a simulator that evolves over time.

‘Thanks to our partnership with Bing, players will enjoy new, even better terrain, and an ever evolving, machine learning-fueled simulator that grows over time.’