Free NHS healthcare means middle-aged people in England are less likely to suffer from conditions like diabetes, stroke and lung disease than their US counterparts.

Experts from University College London and the University of Michigan studied health data on nearly 18,700 people aged 55–64 in England and the States.

Not only did the English have better health overall in middle age than the Americans, but the disparity between the rich and the poor was smaller in England.

The largest differences fell among low-earners, with middle-aged English people in the bottom 20 per cent of incomes having better health than their US equivalents. 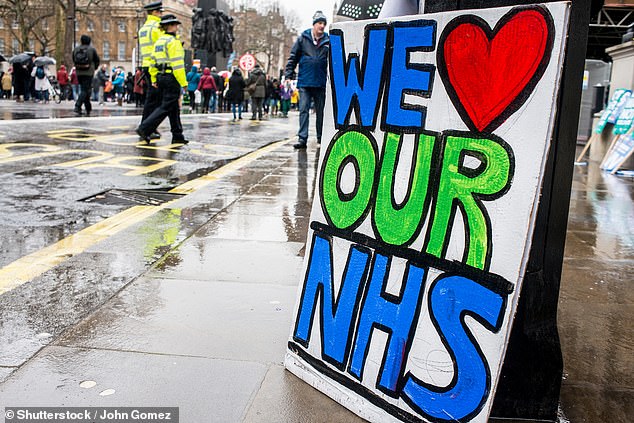 Free NHS healthcare means middle-aged people in England are less likely to suffer from conditions like diabetes, stoke and lung disease than their US counterparts (file photo)

‘It is quite likely that differences in the health care systems between the UK and USA are part of the explanation of the smaller health inequalities in this country,’ paper author Andrew Steptoe of University College London told MailOnline.

‘Because the NHS provides free health care at the point of delivery, people right across the income spectrum are able to access fairly similar levels of primary care and hospital care,’ he explained.

‘In the USA, the situation is much more complicated, with some poorer people not being insured at all and many having to pay out of pocket expenses when they need health care.’

However, Professor Steptoe cautioned, it is likely that there are also other reasons why there are disparities between the two nations other than the different forms of health care system established in the UK and the US.

Specifically, Professor Steptoe and colleagues found that top-earners in the US were more likely to experience arthritis, diabetes, high blood pressure and mental health conditions than their counterparts ‘across the pond’.

This found to be so despite their earning nearly twice as much in after-tax income.

‘It’s likely that other factors contribute to this pattern.’ 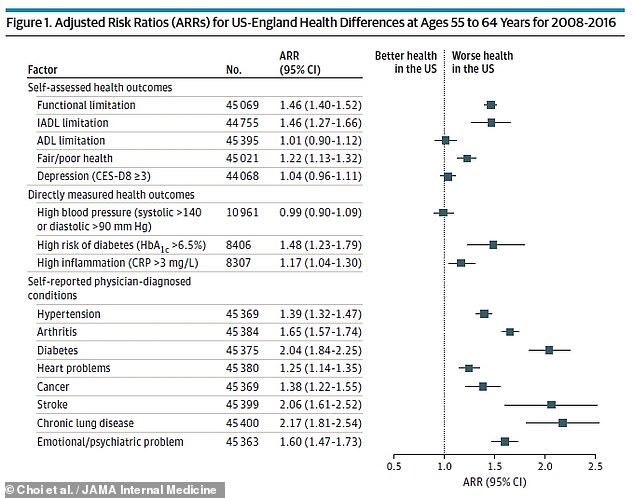 Experts from University College London and the University of Michigan studied health data on nearly 18,700 people aged 55–64 in England and the States. Not only did the English have better health overall in middle age than the Americans, but the disparity between the rich and the poor was smaller in England. Pictured, the risk ratios between the US and England for middle-aged people between 2008–2016, adjusted for factors including sex, race, gender, household size, marital status, immigrant status and education level

From the data they have available, the team explained that it was difficult to say what other factors might be leading to better health outcomes in England than in the US.

‘We know that it’s probably not smoking or obesity, because when we take these into account statistically, the same pattern of results remains,’ Professor Steptoe said.

‘It could be other aspects of lifestyle. My suspicion is that physical activity differences contribute,’ he added.

‘Adults in England tend to walk more as part of their daily lives than their American counterparts, and this may help maintain physical function at a higher level.’

‘Food choice and dietary patterns also differ, and put Americans at a disadvantage.’

In their study, Professor Steptoe and colleagues focused on people whose ages were approaching 65 — the age at which Americans can access Medicare, the US Government program which offers subsidised health care for older citizens.

In the UK, meanwhile, people of all ages are covered by the National Health Service.

The researchers used data from two large, long-term studies carried out between 2008 and 2016 — the ‘English Longitudinal Study of Ageing’ and the US-centric Health and Retirement Study, which was undertaken by the University of Michigan.

Both studies — which together included nearly 5,700 English people and 13,000 Americans — included interviews, income data and so-called ‘biomarkers’ — measures of the severity of various diseases.

Even when the team took into account age, individual differences in gender, race, household size, marital status, immigrant status and education level, the differences between the two nations were stark. 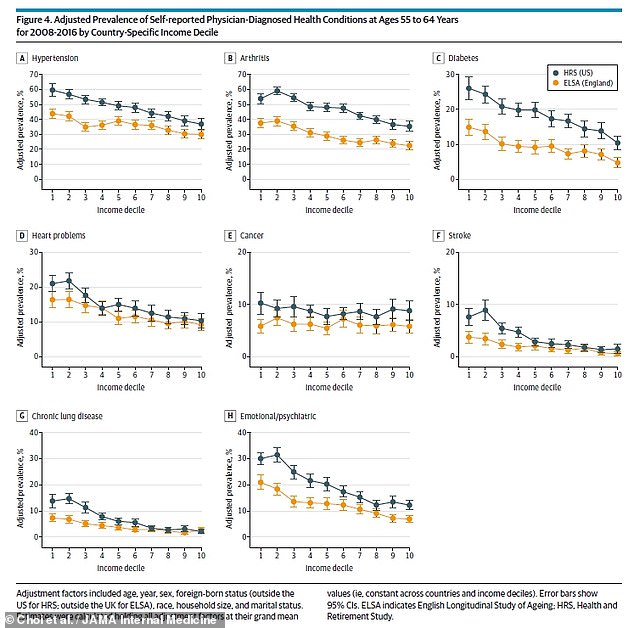 The largest differences fell among low-earners, with middle-aged English people in the bottom 20 per cent of incomes having better health than their US equivalents. They experienced lower rates of conditions including arthritis, diabetes, lung disease, heart problems, high blood pressure, mental health issues and stroke. Pictured, the differences in health outcomes between middle-aged English (yellow) and US (blue) people by income decile. The plots show the percentage prevalence of each disease, adjusting for factors like sex, race, etc. against the income decile — where one is the lowest 10 per cent of earners and 10 the highest

‘This approach lets us shed a lot more light on the within-country differences as well as the differences between countries,’ said paper author and health economist HwaJung Choi of the University of Michigan.

‘If we looked at older adults, we likely wouldn’t see this level of discrepancy, partly because of the effects of Medicare coverage,’ she added.

‘At the same time, we may observe even greater income discrepancy in health within and between countries, for Americans, if we examine younger cohorts.

‘As income inequality continues to increase in the United States the health of subsequent cohorts seems even worse.’

According to the researchers, their study provides the clearest, income-based comparison of health between the UK and the US to date, and the team said they hope the findings will encourage similar investigations contrasting other nations.

‘These are remarkable results and confirm the value of comparisons between countries,’ Professor Steptoe concluded.

In fact, they added that more than 30 countries around the world are now beginning to collect similar datasets, which would allow more of these kind of ‘apples-to-apples’ comparisons to be undertaken in the future.

The full findings of the study were published in the journal JAMA Internal Medicine.

WHY THE US PAYS MORE FOR DRUGS THAN ANY OTHER COUNTRY

The US has the highest drug prices of any country in the world.

On average, Americans pay over four times more for medications than people in the UK or Canada do.

In most countries around the world, the government has some hand in regulating drug prices.

Canada has a federal body that decides how much a medication should cost.

In the UK, the government doesn’t set the prices, but closely regulates them through an advisory board.

But in the US, drug prices are negotiated between drug companies, insurers and middle men called pharmacy benefit managers.

Although Medicaid and Medicare provide federally subsidised insurance, these insurers – and any arm of the US government – are expressly prohibited from any involvement in drug pricing.

Proponents of the current system argue that free market competition results in a sort of self-regulation.

But some policy experts believe that the current system leaves US patients without a dog in the fight over how much they should pay for medications.

Others suggest drug prices in the US should be matched to rates in other countries.