Covid-19 patients with persistent symptoms who recover at home are MORE likely to have health problems three months later than those who were treated in ICU, study finds

Coronavirus patients with persistent but mild symptoms who are left to recover at home more likely to be suffering with bad health three months later than those with more serious conditions who were treated in hospital, a study has found.

Researchers at the Radboud University Medical Center in the Netherlands assessed 124 patients several weeks after recovery.

Patients were compared based on disease severity, the condition of their lungs and general health.

In total, 27 patients developed mild symptoms, 51 had moderate cases, 26 were classed as ‘severe’ and 20 were deemed ‘critical’.

In the majority of all patients the lungs recovered well, but the impact on other aspects of their health was more significant for people with mild and drawn out cases, who had mostly been left to recover at home.

The most common long-term issues were fatigue, shortness of breath and chest pains. 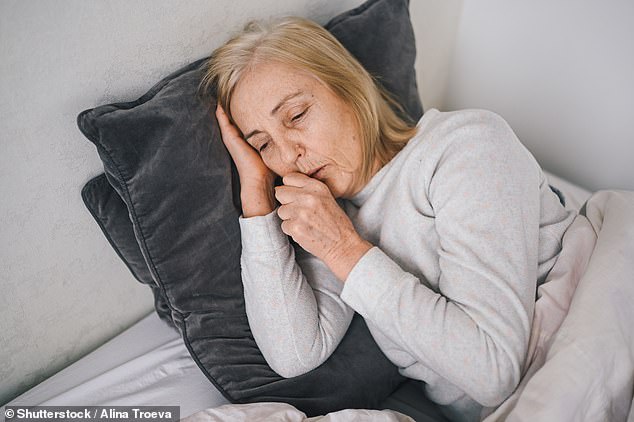 Three months after infection, around 22 per cent of mild referred cases were still unable to complete a six-minute walking test, compared to just 16 per cent of critical cases.

Meanwhile, more than one in five (22 per cent) mild cases suffered depression three months later, compared to one in ten (10 per cent) in patients deemed ‘critical’.

‘Since we found no major radiological, lung functional, inflammatory or exercise capacity abnormalities in these referred mild disease patients after three months, explanations for their poor health status remain unclear at this point,’ the researchers write in their study published in the journal Clinical Infectious Diseases.

Researchers say this group of mild cases is not representative of all people with slight symptoms, but shows some coronavirus patients develop prolonged symptoms which have significant long-term implications.

Cholesterol may be helping the coronavirus to infect human cells by acting as a taxi service, new lab studies reveal.

The findings may explain why people with metabolic conditions such as diabetes and cardiovascular disease, who often have elevated cholesterol levels, make up a disproportionate number of patients who develop severe Covid-19 symptoms.

Researchers found that SARS-CoV-2, the virus that causes Covid-19, can stick to cholesterol molecules as they bind to their regular cell receptor, called SR-B1.

This helps to position the pathogen so that its spike protein can bond with the ACE2 receptor, which allows it to infect the cell.

‘It does seem that there is a clear subgroup of patients who initially experienced mild COVID-19 symptoms and later kept experiencing persistent long-term complaints and limitations’, says first author of the research Bram van den Borst.

‘What is striking is that we barely found any anomalies in the lungs of these patients.

‘Considering the variety and seriousness of the complaints and the plausible size of this subgroup, there is an urgent need for further research into explanations and treatment options.’

All Covid-19 patients discharged from the hospital were recruited for the study and patients suffering with symptoms for longer than six weeks were also referred to the assessment programme by their GP.

Scans of the lungs revealed that in 99 per cent of all cases there were reduced ground-glass opacities – where air spaces in their lungs become filled with a substance, usually pus, blood or water.

Of people with mild disease, 93 per cent had chest x-rays which came back looking normal.

However, more than a third (36 per cent) of patients had mental and cognitive issues three months later.

But while the lungs themselves recovered within three months, more than two thirds (69 per cent) suffered with fatigue and 64 per cent of patients had some form of functional impairment.

The researchers of the latest study did not link their study to the unexplained phenomenon of ‘long covid’, despite the similarity in long-lasting symptoms.

More than 60,000 Britons are thought to be affected by long-lasting symptoms of Covid-19, including fatigue, breathlessness and pain.

Data from the COVERSCAN study showed almost 70 per cent of volunteers had damage to one or more organs, including the heart and lungs, four months after first beating the infection.

The COVERSCAN study is one of many studies examining the long-term damage inflicted by Covid-19 on major organs. It involves 500 survivors.

Dr Amitava Banerjee, one of the researchers at University College London, said 25 per cent of patients had damage to two or more organs.

The two-year study is being led by medical company Perspectum, Oxford University Hospitals NHS Trust and the Mayo Clinic.

LONG COVID: WHAT IS IT AND COULD IT BE FOUR DIFFERENT SYNDROMES?

Covid-19 is described as a short-term illness caused by infection with the novel SARS-CoV-2 coronavirus. Public health officials tend to say people will recover within two weeks or so.

However it’s become increasingly clear that this is not the case for everyone, and that the two-week period is only the ‘acute illness’ phase.

The North Bristol NHS Trust’s Discover project, which is studying the longer-term effects of coronavirus, found that out of a total of 110 patients given a three-month check up, most (74 per cent) had at least one persistent symptom after twelve weeks. The most common were:

Other long term symptoms that have been reported by Covid-19 survivors, both suspected and confirmed, anecdotally, include hearing problems, ‘brain fog’, memory loss, lack of concentration, mental health problems and hair loss.

The impact of Long Covid on people who had mild illness have not been studied in depth yet.

Data from the King’s College London symptom tracking app shows that up to 500,000 people in the UK are currently suffering from the long-term effects of Covid-19.

Academics at the National Institute for Health Research — headed up by Professor Chris Whitty — were asked to review the limited evidence on long Covid to help both patients and doctors understand the ‘phenomenon’.

Their findings warned that even children can suffer and it can’t be assumed that people who are at lower risk of severe illness and death from Covid-19 are also at low risk of lasting side effects.

Doctors cautioned some mental health problems such as anxiety and depression in ‘long-haulers’, as they are known, could be down to lockdowns, as opposed to the virus itself.

The experts also claimed that the symptoms could be grouped into four different groups: