The moon, dubbed Ganymede, is producing chorus waves one million times stronger than the average around the planet.

These permeate throughout the solar system, creating polar lights, like the aurora borealis, and emitting high-energy ‘killer’ electrons.

These highly-charged electron particles, which can carry close to a thousand times more energy than a standard dental X-ray, easily penetrate thick shielding and bury themselves in the insulation around sensitive satellite electronics.

When electricity from these accumulating electrons builds up inside the spacecraft, a strong internal electrical discharge can occur – generating a small lightning strike inside the craft and potentially damaging important components and functions.

Chorus waves are produced by every celestial body in the universe.

However, scientists believe those generated by Ganymede are much stronger than on average because the moon is found within the magnetic field of Jupiter.

According to the latest findings, the waves are also amplified by Jupiter’s moon Europa, which alone makes chorus waves 100 times stronger than average for the planet. 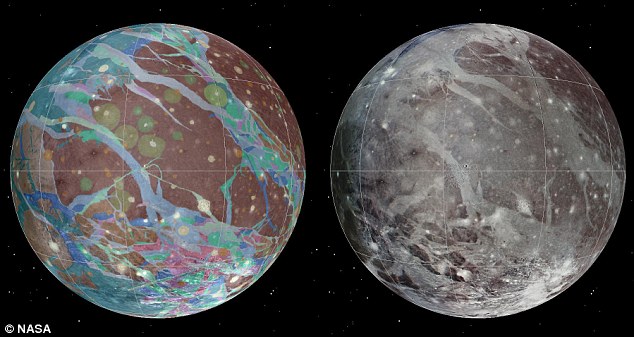 Jupiter’s largest moon, Ganymede (pictured), is creating specialist electromagnetic waves – known as Chorus waves – at an unprecedented level. its chorus waves are a million times stronger than the average around the planet

Chorus waves get their name after scientists tuned into the low frequency emissions and discovered the resulting sound resembled the chirping of birdsong, or for some people, the crackling of a fire.

The latest readings of the waves being beamed by Ganymede were found in data obtained via Nasa’s Galileo Probe spacecraft.

‘It’s a really surprising and puzzling observation showing that a moon with a magnetic field can create such a tremendous intensification in the power of waves,’ says the lead author of the study Professor Yuri Shprits, of the University of Potsdam.

Unlike the Earth, Ganymede and Europa orbit inside the giant magnetic field of Jupiter – the largest planet in the Solar System.

Jupiter’s magnetic field is the largest in the solar system, measuring around 20,000 times stronger than that on Earth.

According to the authors behind the latest study, this location inside the magnetic field is one of the key factors powering the waves around the moons.

WHAT ARE THE GALILEAN MOONS?

The Galilean moons are the four largest moons of Jupiter—Io, Europa, Ganymede and Callisto.

These moons are different from one another and have very different compositions.

They were first discovered in 1610 by Galileo and were the first objects found to orbit a body that was neither Earth nor the Sun.

Since the discovery of the four mammoth moons, the total of Jovian moons has climbed and currently sits at 72.

Ganymede is by far the largest moon and orbits around Jupiter and is bigger than the planet Mercury, despite not being as massive.

It has its own magnetic field and the satellite orbits Jupiter in just over seven days.

It is believed to be around 4.5 billion years old, similar to the age of our planet.

It is the farthest moon from Jupiter, meaning it has not been largely affected by Jupiter’s magnetosphere and one orbit takes 16.7 days. 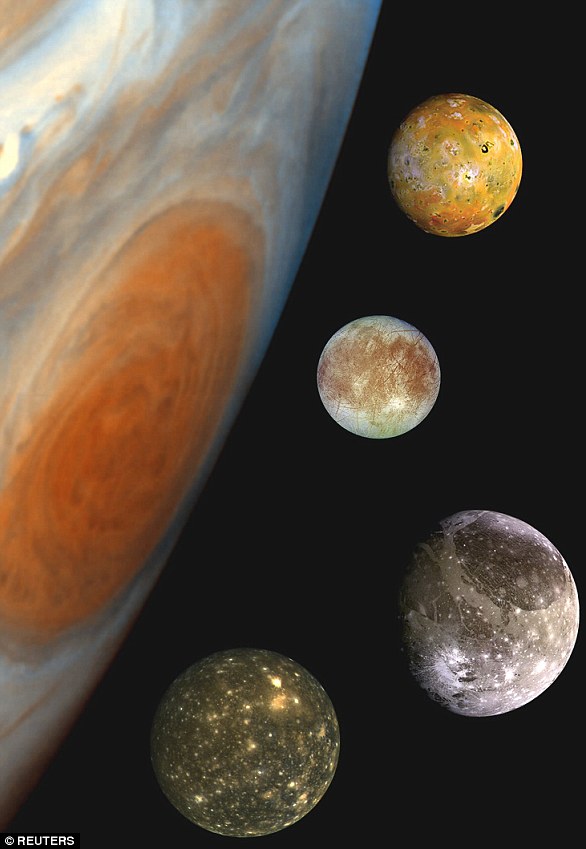 This ‘family portrait,’ a composite of the Jovian system, includes the edge of Jupiter with its Great Red Spot, and Jupiter’s four largest moons, known as the Galilean satellites. From top to bottom, the moons shown are Io, Europa, Ganymede and Callisto

Io is very geologically active, and is the celestial body with the most volcanic activity after Earth.

The atmosphere of IO mostly consists of the toxic compound Sulphur dioxide.

It was named after a nymph called IO who was seduced by the gods Zeus in Greek mythology.

Europa orbits Jupiter every 3.5 days and is tidally locked – just like Earth’s Moon – so that the same side of Europa faces Jupiter at all times.

It is thought to have an iron core, a rocky mantle and a surface ocean of salty water, like Earth.

Unlike on Earth, however, this ocean is deep enough to cover the whole surface of Europa, and being far from the sun, the ocean surface is globally frozen over.

‘Chorus waves have been detected in space around the Earth but they are nowhere near as strong as the waves at Jupiter,’ says Professor Richard Horne of British Antarctic Survey who is a co-author on the study.

‘Even if small portion of these waves escapes the immediate vicinity of Ganymede, they will be capable of accelerating particles to very high energies and ultimately producing very fast electrons inside Jupiter’s magnetic field.’

At the Earth, chorus waves play a major role in producing high-energy ‘killer’ electrons that can damage spacecraft during missions.

The Galilean moons are the four largest moons of Jupiter—Io (left), Europa (second from left), Ganymede (second from the right) and Callisto (right). 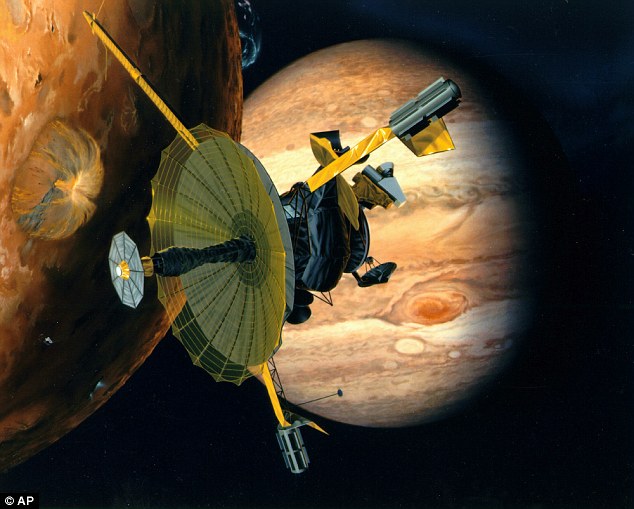 These latest observations raise the question as to whether the waves will do the same around Jupiter and what impact that could have on future missions to the gas giant.

Observations of Jupiter’s waves provides a unique opportunity to understand the fundamental processes that are relevant in the quest for new energy sources.

It may also be able to shed light on the processes of acceleration and loss around the planets in the solar system and the distant corners of the Universe.

Similar processes may occur in exoplanets orbiting other stars.

The latest understanding obtained in this study could help us detect whether exoplanets have magnetic fields.

The research was published in the journal Nature Communications.