Europe’s first civilisation the Minoans were NOT ‘wiped out’ by a natural disaster, says archaeologist after 30 year study of ancient ruins

The ancient Minoans of Crete may not have been wiped out by a natural disaster, but instead were subsumed by foreign cultural influences, an archaeologist has said.

Experts once thought that the advanced civilisation was wiped out by an earthquake or tsunami — perhaps tied to the eruption of Thera in around 1642–1540 BC.

This eruption, on what is today the island Santorini, has been rivalled in modern times only by the colossal explosion of Krakatoa in 1883.

The cataclysm is thought to have triggered a tsunami that travelled south to Crete, destroying the Minoan port at Knossos.

Evidence of destruction dating to around the time of the eruption has been found in various settlements on Crete — and was originally connected to the Thera disaster.

However, the translation of unusual script — dubbed Linear B — on Minoan-era tablets helped overturn the end-by-tsunami theory.

It took decades, but Linear B was identified as a form of ancient Greek — evidence that the Mycenaeans from the mainland had heavily changed the Minoan culture.

The debris previously identified as coming from a natural disaster was likely instead the result of Minoan resistance to the influence of the Mycenaeans. 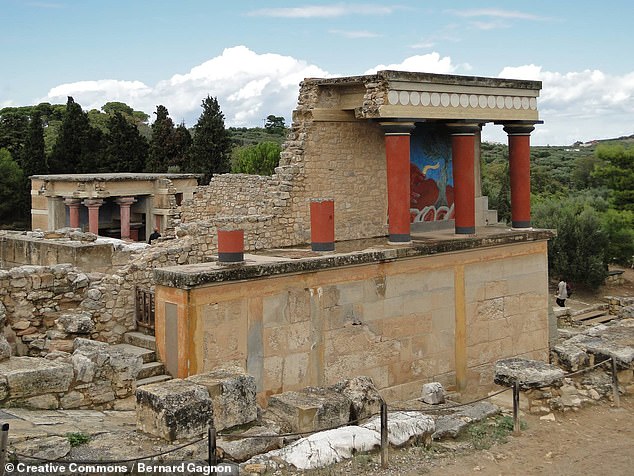 The ancient Minoans of Crete may not have been wiped out by a natural disaster, but instead were subsumed by foreign cultural influences, an archaeologist has said. Pictured, the ruins of the palace of Knossos, on Crete, as seen in the present-day

However, the translation in 1952 of unusual script — dubbed Linear B — on Minoan-era tablets helped overturned the end-by-tsunami theory. Pictured, one of the Linear B tablets which was discovered by Arthur Evans, the archaeologist who first unearthed Knossos

The Minoan civilisation — given this name retrospectively in a nod to their legendary King Minos, of Minotaur fame — was notable for its elaborate architecture.

Among these buildings was the stunning multi-level palace at Knossos, the heart of the Minoan’s sea-based empire.

However, it appears that Knossos persisted as an ancient settlement for some time after the eruption of Thera.

‘Thera’s eruption did not directly affect Knossos,’ archaeologist Colin Macdonald of the British School in Athens — who has been excavating Minoan-era remains on Crete for 30 years — told Haaretz.

‘No volcanic-induced earthquake or tsunami struck the palace which, in any case, is 100 meters above sea level.’

Instead, researchers believe that the Minoan and Mycenaean civilisations gradually merged, with the latter culture becoming dominant — leading to the shift in the language and writing system used in the ancient city.

According to Macdonald, it is possible that the eruption weakened the Minoan hold on the region — likely thanks to the loss of the port on Thera which had aligned itself with the authorities at Knossos.

This may have allowed the Mycenaeans to establish their own trading hubs to fill the void — like the large settlement at Phylakopi, on the island of Milos — and set their flavour of the Greek language as the common tongue of the Aegean economy. 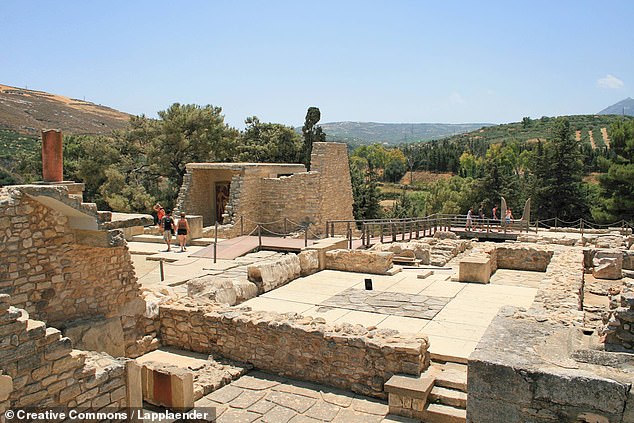 The debris previously identified as coming from a natural disaster was likely instead the result of Minoan resistance to the influence of the Mycenaeans. Pictured, the ruins at Knossos 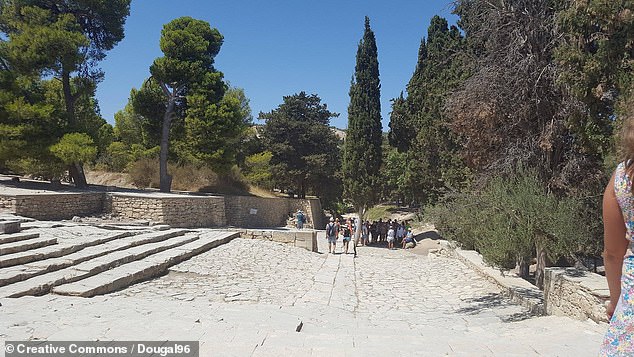 The Minoan civilisation — given this name retrospectively in a nod to their legendary King Minos, of Minotaur fame — was notable for its elaborate architecture. Pictured, the reception courtyard at the royal palace of Knossos

In addition, Macdonald notes, the regional practice of stonemasons leaving their marks on their work disappeared from the buildings at Knossos at this time — and burial practices also appear to have changed.

The Mycenaeans may even have captured the island of Crete for themselves.

Either way, as the Minoan administration changed under the foreign influence, Macdonald speculated, perhaps even the local religion collapsed in response.

‘This could well have manifested itself in local uprisings and the burning of administrative and elite buildings,’ he added. 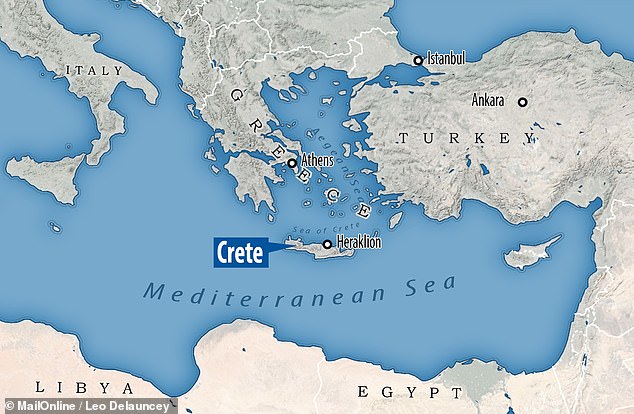 ‘Thera’s eruption did not directly affect Knossos,’ archaeologist Colin Macdonald of the British School in Athens — who has been excavating Minoan-era remains on Crete, pictured, for 30 years — told Haaretz

WHO WERE THE MINOANS?

The Minoan civilisation arose on the Mediterranean island of Crete in approximately 2600BC and flourished for 12 centuries until around 1400BC.

The origins of the Minoan and Mycenaean peoples have puzzled archaeologists for more than 100 years.

Last year it was revealed that the Minoans and Mycenaens were descended from early Neolithic farmers who migrated from Anatolia to Greece and Crete.

Modern Greeks, in turn, are largely descendants of the Mycenaeans, the study found.

Experts from the University of Washington, the Harvard Medical School and the Max Planck Institute for the Science of Human History, together with archaeologists and other collaborators in Greece and Turkey, gathered data from the region.

The results showed that Minoans and Mycenaeans were genetically highly similar, but not identical.

The early Neolithic farmers they descended from likely migrated thousands of years prior to the Bronze Age from Anatolia.

While both Minoans and Mycenaeans had both ‘first farmer’ and ‘eastern’ genetic origins, Mycenaeans traced an additional minor component of their ancestry to ancient inhabitants of Eastern Europe and northern Eurasia.

Back in 2013 it was revealed that weapons that dominated Europe for more than 3,000 years were introduced by the ancient Minoan civilisation.

Swords, metal battle axes, long bladed spears, shields and possibly even armour were brought to Europe by the Minoans who ruled Crete.

Since towns and palaces in Crete, the home of the mythical Minotaur, were first dug up and studied a century ago the Minoans have been widely regarded by archaeologists as an essentially peaceful people.

But a reassessment of the role of warriors and weapons in Ancient Crete, which was at its peak from 1900BC to 1300BC, now concludes that the Minoans were a violent and warlike people.