Footage of the creature shows it lying helplessly on the ground with one eye.

Its mother tries to rescue it but it appears unable to stand.

The calf was born in the Ranaghat area of West Bengal, India.

Speaking in local Bengali, one villager can be heard saying: “Everything is fine until the neck, it is just the head that is bizarre.”

Another woman says: “I have never heard or seen anything like this in my life.”

The owner of the creature has said people from the neighbouring village have flocked to their home to worship it.

“We all think this is a miracle of God and we think this is Lord Brahma [creator god in Hinduism] who has taken birth in our home in the avatar of the cow,” the unnamed owner said.

But claims the mutant calf is the result of a “miracle” have been rubbished by vets. 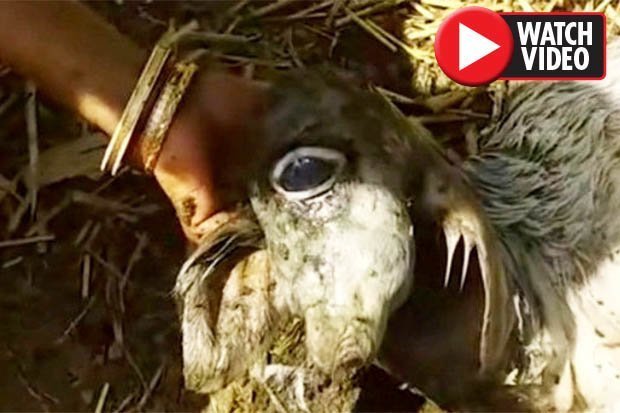 They say the abnormality is due to a biological birth defect called cyclopia.

Calves born with the rare congenital disorder only survive for a few weeks.

It is not the first time mutant animals have attracted visitors for their religious links.

A cow born with a human face has been worshipped as a Hindu god.