That’s FarFarOut, man! Most distant object in the solar system is spotted by scientists more than 140 times farther from the sun than Earth

The most distant object in the solar system has been spotted by scientists in the depths of space – far beyond Pluto.

The faint object is located approximately 140 times further away from the sun than the distance between our star and Earth – known as an astronomical unit (AU).

It has been dubbed ‘FarFarOut’ by its discoverers who admit to knowing very little about the object they accidentally discovered while searching for Planet X. 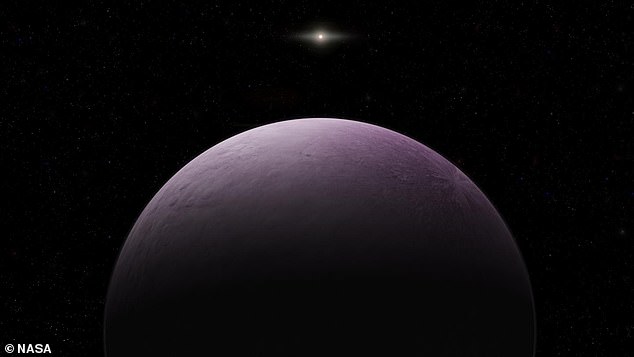 It has been dubbed ‘FarFarOut’ by its discoverers who admit to knowing very little about the object. The discovery breaks the record for the most distant object in the solar system of 120 AU (11 billion miles) – which was named Farout (artist’s impression pictured)

Dr Scott Sheppard, an astronomer at the Carnegie Institution for Science in Washington DC, found the object when analysing some data when a talk he was scheduled to give was postponed by 24 hours.

It breaks the record for the most distant object in the solar system of 120 AU (11 billion miles) – which was named Farout and also discovered by Dr Sheppard back in December.

The find was first reported at a postponed talk on the ongoing search for Planet X – a giant ninth planet theorised to exist beyond Pluto – at the Carnegie centre after being delayed 24 hours due to snowfall.

It was in this delay that Dr Sheppard located the object when scouring data collected last month.

The discovery is in its infancy, with a formal name not designated to the object and no details of it known.

‘This is hot off the presses,’ he said during his rescheduled talk, Science reports.

It marks the latest discovery from a decade-long research project which uses data from the world’s most powerful optical telescopes. 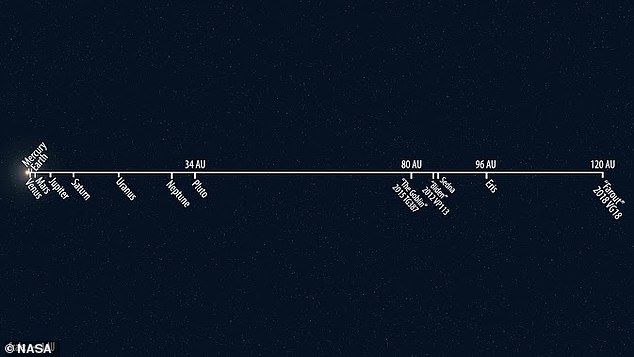 Their orbit’s are a mystery and it remains unknown if they are able to avoid the vast gravitational pull of the four known gas giants.

Years of study are expected to take place to uncover the secrets of FarFarOut to provide more information on what happens at the outermost reaches of the solar system.

Farout, known formally as 2018 VG18, is so far away and moving so slowly it will take a few years to determine its orbit. At that distance, it could take more than 1,000 years to orbit the sun.

WHAT IS MYSTERIOUS ‘PLANET X’?

Astronomers believe that the orbits of a number of bodies in the distant reaches of the solar system have been disrupted by the pull of an as yet unidentified planet.

First proposed by a group at CalTech in the US, this alien world was theorised to explain the distorted paths seen in distant icy bodies.

In order to fit in with the data they have, this alien world – popularly called Planet Nine – would need to be roughly four time the size of Earth and ten times the mass.

Researchers say a body of this size and mass would explain the clustered paths of a number of icy minor planets beyond Neptune.

First proposed by a group at CalTech in the US, this alien world was theorised to explain the distorted paths seen in distant icy bodies.

The theoretical Planet Nine is based on the gravitational pull it exerts on these bodies, with astronomers confident it will be found in the coming years.

Those hoping for theoretical Earth-sized planets proposed by astrologers or science fiction writers – which are ‘hiding behind the sun’ and linked with Doomsday scenarios – may have to keep searching.