The startling sight was spotted by YouTube star MrMBB333 after watching a National Oceanic and Atmospheric Administration (NOAA) satellite.

In the clip, clouds can be seen swirling above the Pacific Ocean off the coast of South America.

Suddenly, the formation seems to break and reveal a huge, black triangular object.

It seems to be the same size as both areas combined – a staggering 1,500 miles.

The uploader said it happened on April 9 and was visible hovering in the same location for seven hours.

“You can see what looks like a giant triangle out over the ocean, visible by satellite,” he said.

“I’ve used this satellite consistently every year for 10 years and have never seen anything like that.

“It looks like a triangle to me, it could be a natural artefact but all I can tell you is I’ve used this hundreds of times and have never seen that. 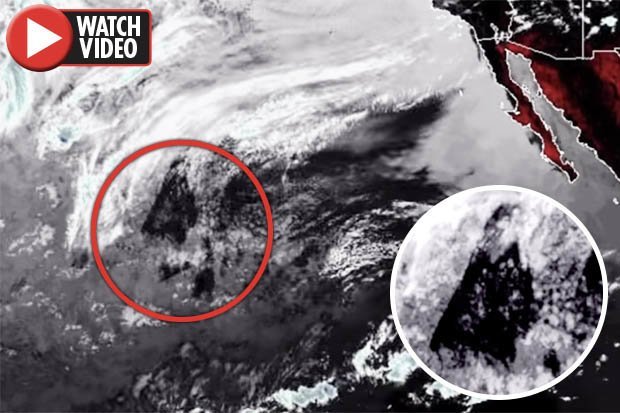 “It doesn’t fit in, it doesn’t look natural, the rest of the clouds do but that doesn’t.”

Thousands of viewers have flocked to the comments section of the clip after it was posted today.

“Most odd is all I can say to that,” one use commented.

While a third claimed: “Looks like a giant triangle to me also. I still believe it’s some secret government project.”