You are what you eat? Naked mole rats consume their queen’s POOP to become doting mothers

Scientists have discovered what may be the naked mole rat’s most bizarre trait yet.

These hairless rodents live in colonies dominated by a queen, the sole female in the group who produces offspring.

All of the other females are unable to reproduce, but care for the queen’s children as if they were their own.

Now, researchers studying the unique situation have found that this maternal instinct may boil down to the females’ unusual method of obtaining key hormones: consuming the queen’s feces. 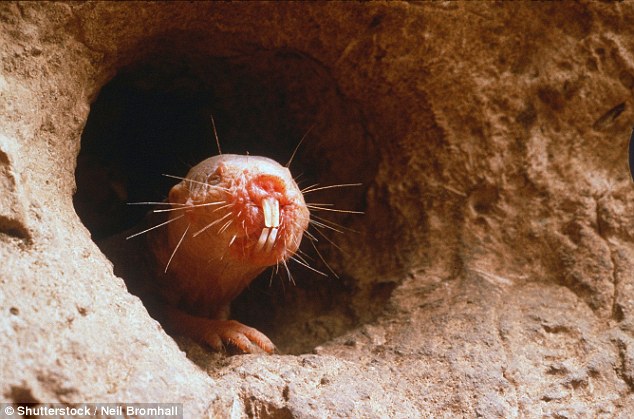 Scientists have discovered what may be the naked mole rat’s most bizarre trait yet. These hairless rodents live in colonies dominated by a queen, the sole female who produces offspring. The ‘subordinate’ females, however, may eat her poop to become more maternal

A team of researchers in Japan describe the latest findings in a paper published to Proceedings of the National Academy of Sciences.

The phenomenon of eating feces – known as coprophagy – may play an important role in child-rearing for naked mole rats.

In these colonies, the non-breeding ‘subordinate’ females still perform a number of parental duties, including grooming and corralling of the pups.

As naked mole rats are known to eat their own feces, the researchers suspected they may also consume the queens, consequently ingesting some of the hormones produced by her body.

The team tested this by feeding different types of pellets to the subordinate females, with some coming from the pregnant queens and others from nonpregnant queens augmented with estradiol, which the queen naturally produces.

Within days of the feeding period, the naked mole rats became more responsive to the pups, the researchers found.

And, their fecal and urinary estradiol concentrations fluctuated in a way that mimicked the queen’s reproductive stages. 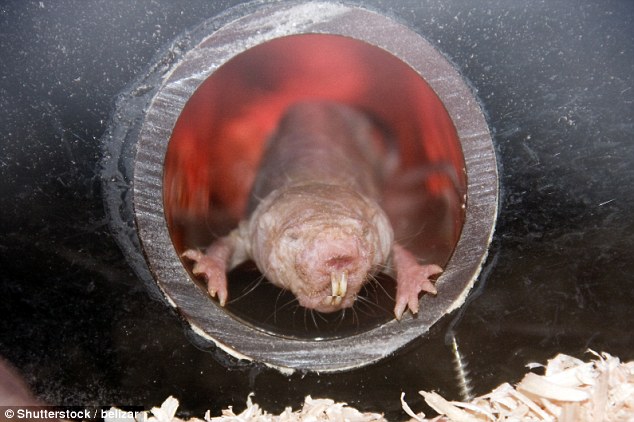 In these colonies, the non-breeding ‘subordinate’ females perform a number of parental duties, including grooming and corralling of the pups. File photo

The researchers say the transferring of this hormone influences the subordinate females’ behaviour, with a few in particular acting as primary caregivers for the queen’s offspring.

Naked mole rats have all sorts of unusual traits that make them interesting to scientists.

They have long lifespans, are resistant to cancer, and can even survive extended periods of time deprived of oxygen, making them a key target in the ongoing search for the ‘fountain of youth.’

Recent breakthroughs have uncovered some of the secrets behind their incredible resilience.

WHY ARE SCIENTISTS INTERESTED IN THE NAKED MOLE RAT?

With wrinkly skin and walrus like teeth, naked mole rats are never going to win any beauty contests. 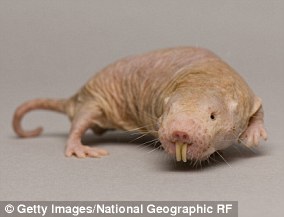 Yet these creatures, which live underground in the deserts of east Africa, are one the medical marvels of the natural world.

If a human was to have the same lifespan as a naked mole rat, relative to its size, they would live for up to 600 years.

As well as being resistant to cancer, they have very low respiratory and metabolic rates, meaning they use oxygen sparingly.

Scientists have put considerable effort into sequencing the creatures’ genome in an attempt to understand its secrets.

The machinery that translates their DNA into the functioning molecules in the cells, proteins, have also been found to be highly accurate.

This means their proteins contain few errors compared to other mammals, and meaning their is less chance of something malfunctioning.

A study published in February, for example, identified a unique characteristic behind a cellular process that may allow the rodents to fight both cancer and the effects of aging, despite the two acting like ‘competing interests’ in other animals.

A process known as cellular senescence is responsible for preventing damaged cells from dividing out of control, which can lead to cancerous tumors.

But, this comes with a price. As senescence stops cell division, it also accelerates aging.

While it was thought the rodents may not experience this, researchers found, to their surprise, that naked mole rats do undergo cellular senescence.

For these rodents, however, the researchers found the process resulted in higher resistance to the damaging effects by inhibiting the metabolic process of the senescent cells.