The NASA-tracked object threatens to hit the planet with the force of 230 kilotons or 230,000 tons of TNT on May 6, 2022. For comparison, the atomic bomb dropped on Hiroshima in 1945 carried a charge of approximately 15 kilotons of TNT. An asteroid this big is likely deadly enough to wipe out a large city off the face of the planet.

Astronomers have dubbed the approaching object Asteroid 2009 JF1, after its date of discovery 10 years ago.

According to NASA, JF1 is a Near-Earth Object or NEO, meaning it orbits the Sun close to Earth.

“If a comet’s or asteroid’s approach brings it to within 1.3 astronomical units of the Sun, we call it a Near-Earth object.” 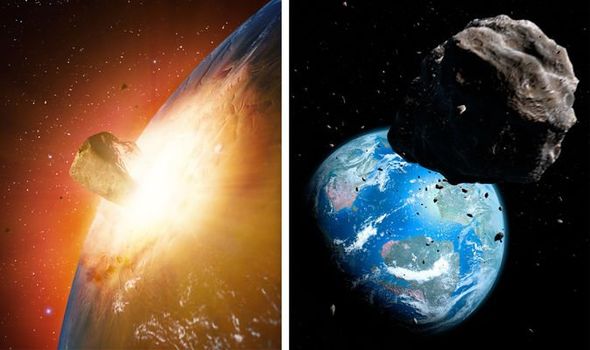 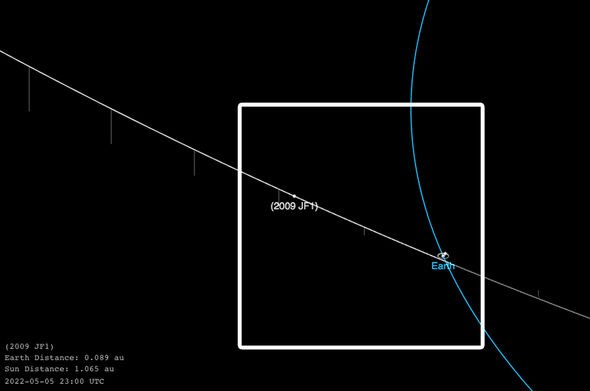 The US space agency estimates JF1 measures somewhere around 426ft (130m) in diameter.

On this scale, the space rock is comparable in size to the London Eye and the Great Pyramid of Giza in Egypt.

However, the asteroid is not big enough to fit the description of what NASA considers a “potentially hazardous asteroid” or PHAs.

In 2018 a White House report on the dangers of NEOs and undetected space rocks, PHAs were described as NEOs upwards of 459.3ft (140m) across.

The report said: “Larger NEOs greater than 140 meters would have the potential to inflict severe damage to entire regions or contents.

“Such objects would strike Earth with a minimum energy of over 60 megatons of TNT, which is more than the most powerful nuclear device ever tested.

“Fortunately, these are far less common and are easier to detect and track than smaller NEOs.”

Thankfully, the NASA-tracked asteroid is not big enough to unleash devastation on this scale. 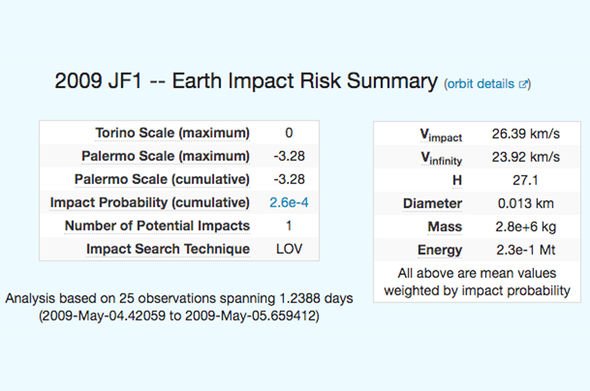 Thankfully, the asteroid’s movements are being tracked by NASA’s Jet Propulsion Laboratory and Sentry systems.

NASA said: “Sentry is a highly automated collision monitoring system that continually scans the most current asteroid catalogue for possibilities of future impact with Earth over the next 100 years.

“Whenever a potential impact is detected it will be analysed and the results immediately published here, except in unusual cases where we seek independent confirmation.”

Despite the asteroid’s terrifying dimensions and breakneck pace, the odds of an impact are fairly low.

NASA estimates there is a one in 3,800 odds the asteroid will hit Earth on the expected date.

The odds were calculated based on 25 orbital observations made between May 4 and May 5, 2009.