The colossal asteroid will skim the Earth from a height at which many of the planet’s spacecraft operate. Asteroid Apophis will swing by from a distance of about 19,000 miles (31,000 km) above the surface. And when the asteroid approaches, it will be visible to the naked eye as a speck of light gradually “getting brighter and faster”. At it’s brightest, the asteroid will light up to the same magnitude as the Little Dipper or Ursa Minor in the northern skies.

Marina Brozović, a radar scientist at NASA’s Jet Propulsion Laboratory, said: “The Apophis close approach in 2029 will be an incredible opportunity for science.

“We’ll observe the asteroid with both optical and radar telescopes.

“With radar observations, we might be able to see surface details that are only a few meters in size.”

According to the US space agency, it is incredibly rare for asteroids of this size to shoot past our planet this close. 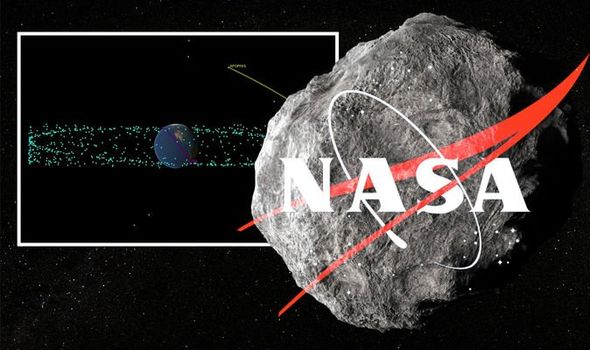 But there is no reason to panic just yet because Apophis is expected to pass the Earth without the risk of striking.

There is, however, a good reason to anticipate the flyby and NASA said the “international asteroid research community couldn’t be more excited.”

NASA explained: “The asteroid, looking like a moving star-like point of light, will first become visible to the naked eye in the night sky over the southern hemisphere, flying above Earth from the east coast to the west coast of Australia.

“It will be mid-morning on the East Coast of the United States when Apophis is above Australia.

“It will then cross the Indian Ocean, and by the afternoon in the eastern US it will have crossed the equator, still moving west, above Africa.”

Asteroid Apophis will make its closest approach of the Earth around 11pm BST or 6pm Eastern Time over the Atlantic Ocean.

The asteroid will shoot by so fast, NASA expects it cross the ocean in just one hour.

By around midnight to 7pm EDT, the space rock will cross the United States. 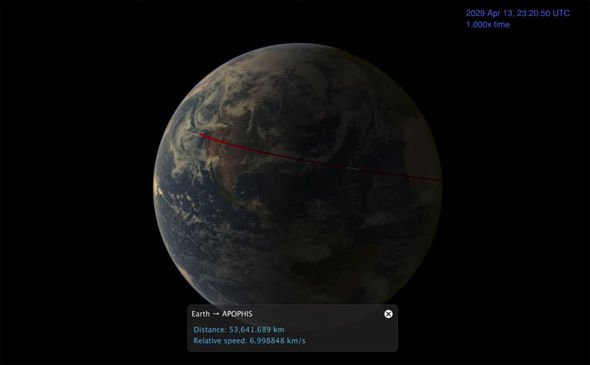 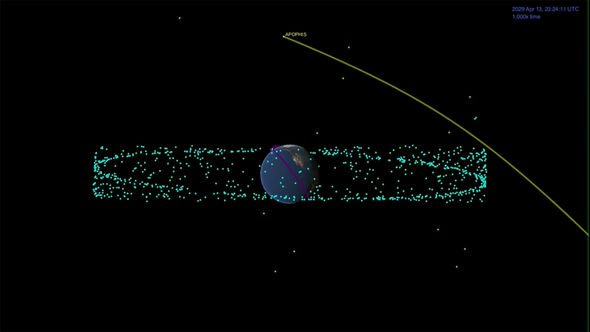 Asteroid Apophis was first discovered in 2004 by astronomers at the Kitt Peak National Observatory in Arizona, US.

Initial orbital calculations for the space rock predicted a dire 2.7 percent chance of Apophis striking the Earth 10 years from now.

Thankfully, additional observations have ruled out the possibility of cataclysmic impact.

NASA said: “Since its discovery, optical and radar telescopes have tracked Apophis as it continues on its orbit around the Sun, so we know its future trajectory quite well.

“Current calculations show that Apophis still has a small chance of impacting Earth, less than 1 in 100,000 many decades from now, but future measurements of its position can be expected to rule out any possible impacts.”