NASA has captured summer on Saturn in an amazing snapshot released today taken by the the Hubble Space Telescope — which also reveals an icy blue southern pole.

The stunning shot — which shows how the gas giant’s bands appear more red in the increased levels of sunlight — was taken by the orbiting observatory on July 4, 2020.

Astronomers said that Saturn’s rings — seen from a distance of 839 million miles from Earth — are so bright in the image that they look like ‘freshly fallen snow’. 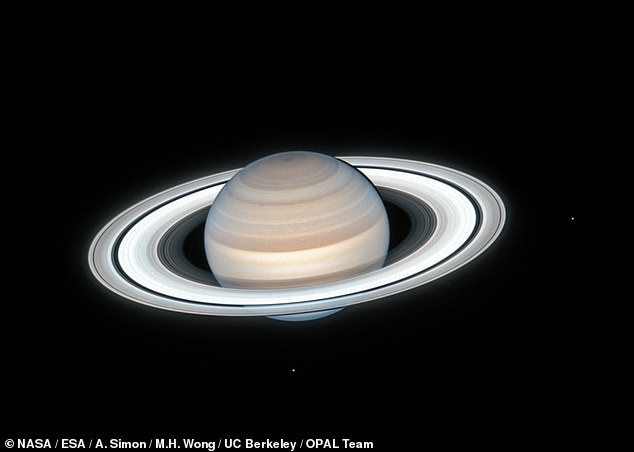 NASA has captured summer on Saturn in an amazing new snapshot, pictured, taken by the the Hubble Space Telescope — which also reveals an icy blue southern pole

Two of Saturn’s icy moons are also clearly visible in the exposure — tiny Mimas on the right of the image and icy Enceladus at bottom.

Saturn’s atmosphere — which is primarily made up of hydrogen and helium, with traces of ammonia, hydrocarbons, methane and water vapour — give the planet its yellowish-brown colour.

However, the reddish haze seen over the northern hemisphere in the image suggests that the summer months may change the amount of photochemical haze produced — or alternatively alter the atmospheric circulation and remove ice from aerosols.

Researchers from NASA said that the reason why Saturn has  concentric rings — which are made out of pieces of ice ranging in size from tiny grains up to giant boulders — remains a mystery. 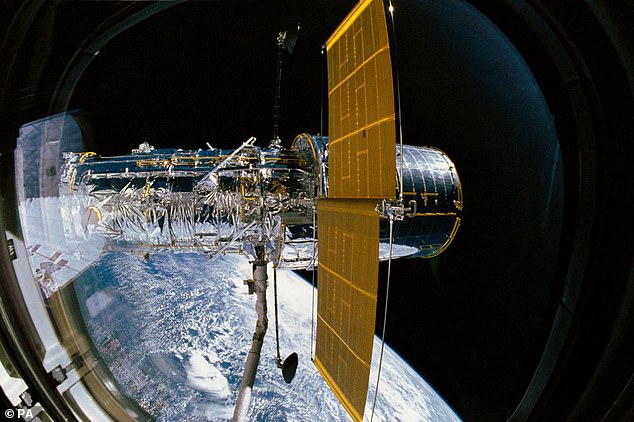 The stunning shot — which shows how the gas giant’s bands appear more red in the increased levels of sunlight — was taken by the Hubble Space Telescope, pictured, on July 4, 2020

This, he added, ‘is one of the arguments for a young age of the ring system.’

This image was taken as part of the Outer Planets Atmospheres Legacy project, which aims to develop our understanding of the atmospheric dynamics and evolution of the gas giants in our solar system.

In fact, the recent Hubble snapshot revealed a number of small atmospheric storms — temporary features which are seen to come and go each time the telescope is annually trained on Saturn.