They recently marked the 50th anniversary of the world’s first-ever successful space mission.

But NASA officials have another reason to celebrate, this week, after confirming that the Orion crew capsule is officially complete.

It will now be ready to tests and preparations for the 2020 lunar orbit timeline and a crewed launch two years afterwards.

Vice President Mike Pence made the official announcement at NASA headquarters in Florida on Saturday afternoon. 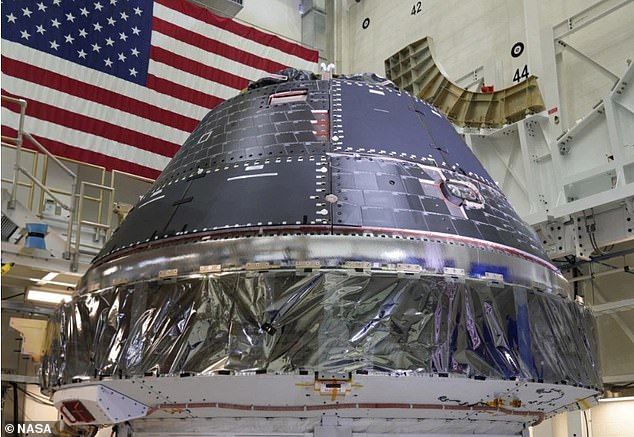 Finished product: The underlying structure of the crew module, known as the pressure vessel, was manufactured at NASA’s Michoud Assembly Facility in New Orleans and shipped to the Kennedy Space Centre

‘Thanks to the hard work of the men and women of NASA, and of American industry, the Orion crew vehicle for the Artemis 1 mission is complete and ready to begin preparations for its historic first flight,’ said Pence.

Artemis 1 will launch NASA’s Orion spacecraft and Space Launch System rocket around the Moon to test the system and pave the way for landing the first woman and the next man on the Moon in five years, as well as future missions to Mars.

The underlying structure of the crew module, known as the pressure vessel, was manufactured at NASA’s Michoud Assembly Facility in New Orleans and shipped to Kennedy, where teams have integrated thousands of parts into the crew module and conducted tests to certify all of its systems for flight.

Once the two modules are joined, engineers will install a heatshield backshell panel on the spacecraft and prepare it for a September flight inside the agency’s Super Guppy aircraft to NASA’s Plum Brook Station in Sandusky, Ohio.

Testing at Plum Brook will ensure the joined modules can withstand the deep space environment.

When testing in Ohio is complete, the spacecraft will return to Kennedy for final processing and inspections. 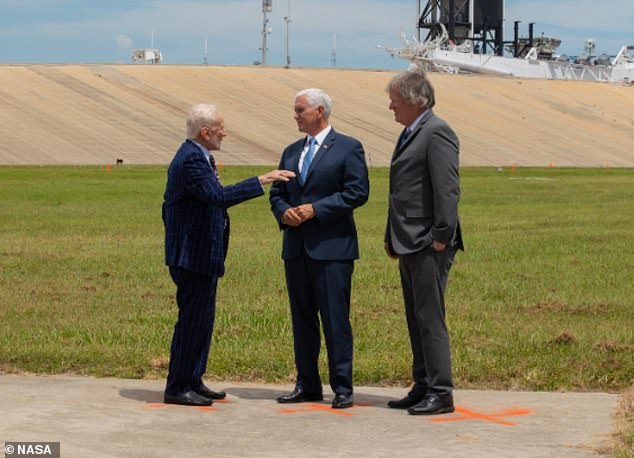 WHAT ARE NASA’S PLANS FOR ORION?

Nasa’s Orion, stacked on a Space Launch System rocket capable of lifting 70 metric tons will launch from a newly refurbished Kennedy Space Center in 2019 for the EM-1 mission.

The uncrewed Orion will travel into Distant Retrograde Orbit, breaking the distance record reached by the most remote Apollo spacecraft, and then 30,000 miles farther out (275,000 total miles).

The mission will last 22 days and was designed to test system readiness for future crewed operations. 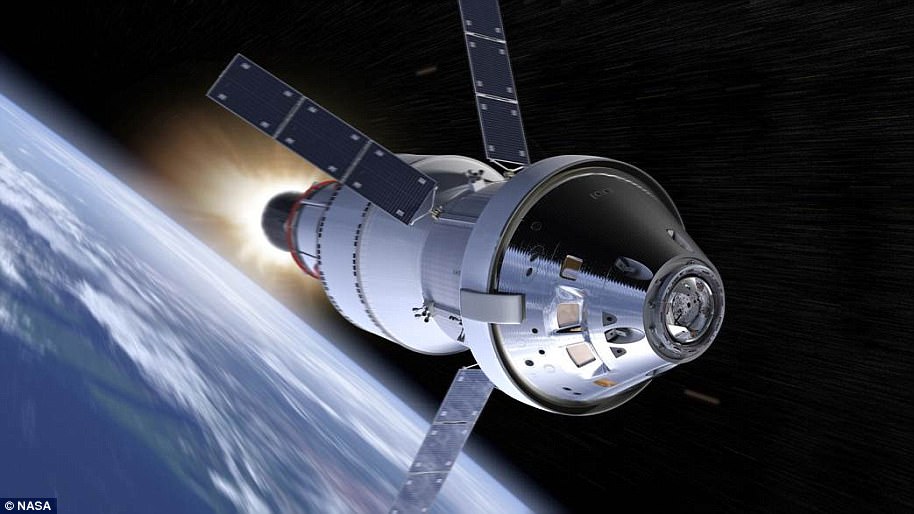 While NASA has been hard at work in recent months readying the Orion spacecraft and SLS rocket for an unmanned flight next year, the space agency and its partners are already looking ahead. An artist’s impression is pictured

This could come as early as August 2021, according to NASA.

Though crew size will be determined closer to launch, the space agency plans to fly up to four astronauts.

Orion will carry the crew through two orbits around Earth to ensure everything is working properly.

Them, it will carry out different orbital to eventually be on a path toward the moon.

The crew will fly around the backside of the moon, creating a figure eight, before returning to Earth using the moon’s gravitational pull ‘like a slingshot to bring Orion home,’ NASA says.

Teams then will fuel the spacecraft and transport it to Kennedy’s iconic Vehicle Assembly Building for integration with the SLS rocket before it is rolled out to Launch Pad 39B for the launch of Artemis 1.

Orion won’t be carrying personnel though – it will travel uncrewed into Distant Retrograde Orbit, breaking the distance record reached by the most remote Apollo spacecraft, and then 30,000 miles farther out (275,000 total miles).

The mission will last 22 days and was designed to test system readiness for future crewed operations.