Home » Science » NASA finds there are fewer galaxies than first thought, leaving the possibility we're alone in the universe

NASA released a stunning, massive image from the Hubble space telescope of the Triangulum Galaxy, which is 3 million light years from our own Milky Way Galaxy.

A mission from NASA has discovered there may be a lot fewer galaxies than initially believed, opening up the possibility humanity is alone in the universe.

The New Horizons mission, which yielded the first close-up photos of Pluto, provided enough data for scientists to make the determination that it’s likely the number of galaxies is in the hundreds of billions, rather than 2 trillion, as initially believed.

“It’s an important number to know — how many galaxies are there?” the study’s lead author, Marc Postman, said in a statement. “We simply don’t see the light from 2 trillion galaxies.” 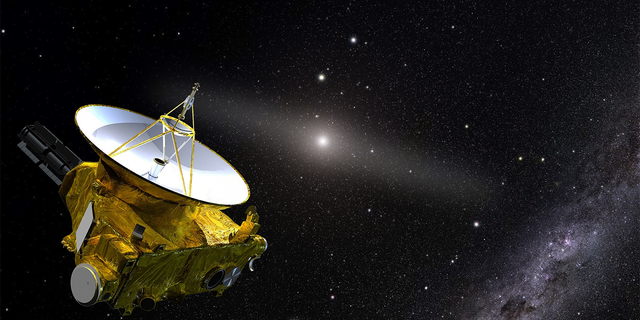 This artist’s illustration shows NASA’s New Horizons spacecraft in the outer solar system. In the background lies the Sun and a glowing band representing zodiacal light, caused by sunlight reflecting off of dust. By traveling beyond the inner solar system and its accompanying light pollution, New Horizons was able to answer the question: How dark is space? At lower right are background stars of the Milky Way. (Credit: Joe Olmsted)

The findings, which were published and can be read here, are in stark contrast to the 2 trillion figure that had long been used, thanks to data from the Hubble Space Telescope. Scientists used a mathematical model to determine that 90% of the galaxies in the universe were beyond Hubble’s ability to see “visible light.”

Traveling at roughly 33,000 miles per hour, the $720 million New Horizons spacecraft, which launched in January 2006, will eventually reach interstellar space, like the Voyager probes before it. The fact that it is currently near the edge of the Solar System allows it to see ambient sky 10 times darker than the Hubble’s vantage point.

“These kinds of measurements are exceedingly difficult. A lot of people have tried to do this for a long time,” the study’s co-author, Tod Lauer, explained. “New Horizons provided us with a vantage point to measure the cosmic optical background better than anyone has been able to do it.”

The New Horizons spacecraft is now 4.4 billion miles from Earth.

“Take all the galaxies Hubble can see, double that number, and that’s what we see – but nothing more,” Lauer added.

NASA’s James Webb Telescope, which had its launch pushed back because of the coronavirus pandemic, could help scientists learn more about the faint glow in the background of space and learn if those are dwarf galaxies or something else.

The New Horizons spacecraft has made a number of discoveries in recent memory, including the object Arrokoth, previously known as Ultima Thule. In May 2019, New Horizons discovered water and organic molecules on Arrokoth, which is deep within the so-called Kuiper Belt, or Twilight Zone, well beyond the orbit of Neptune.