Nasa scientists believe they have found new evidence of the mysterious ‘wall’ that surrounds all the planets and objects in our solar system.

This mysterious bubble marks the boundary between the solar system and interstellar space and provides a marker for the edge of the sun’s influence.

According to the latest findings, the barrier is actually a vast amount of trapped hydrogen atoms caught up in the solar wind of our star.

These produce waves of ultraviolet light in a very distinctive way, which have been detected by the sensors aboard the New Horizons interplanetary space probe. 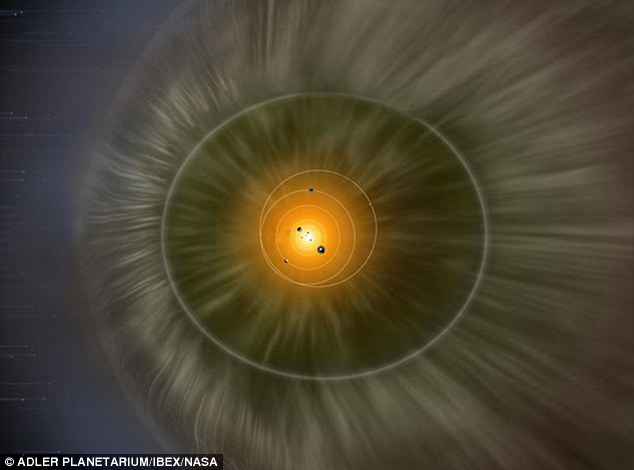 Nasa scientists believe they have found new evidence of a mysterious ‘wall’ surrounding our solar system. This mysterious bubble marks the boundary between the Solar System and interstellar space and provides a mark for where the Sun’s influence wanes

Astronomers first glimpsed the phenomenon around 30 years ago, when faint signs were detected by both Voyager probes.

However, evidence supporting the theory of a heliosphere has remained murky in the intervening yeas.

Nasa’s New Horizons spacecraft, which passed Pluto in 2015, has been using its on-board detector, known as ‘Alice’, to look for traces of the celestial interaction.

‘We’re seeing the threshold between being in the solar neighbourhood and being in the galaxy,’ astronomer Leslie Young of the Southwest Research Institute and New Horizons team told Science News.

New Horizons is the first spacecraft with the capability to verify Voyager’s observations. It has scanned the ultraviolet sky seven times between 2007 to 2017.

According to the measurements taken by all three spacecrafts, the three decade old theory about the heliosphere appears to still hold true.

In the journal Geophysical Research Letters, Nasa scientists wrote: ‘Long‐term observations made with the Alice instrument on the New Horizons spacecraft confirm measurements made 30 thirty years earlier with the Voyager spacecraft.

‘Both sets of data are best explained if the observed ultraviolet light is not only a result of the scattering of sunlight by hydrogen atoms within the solar system but includes a substantial contribution from a distant source.

‘This distant source could be the signature of a “wall” of hydrogen, formed near where the interstellar wind encounters the solar wind or could be more distant.

‘Similar future observations from New Horizons are planned about twice each year.’

The spacecraft that gave us the first close-up views of Pluto now has a much smaller object in its sights.

New Horizons is now track to fly past a recently discovered, less than 30-mile-wide object out on the solar system frontier.

The close encounter with what’s known as 2014 MU69 would occur in 2019. It orbits nearly 1 billion miles (1.6 billion kilometers) beyond Pluto.

Nasa and the New Horizons team chose 2014 MU69 in August as New Horizons’ next potential target, thus the nickname PT-1. Like Pluto, MU69 orbits the sun in the frozen, twilight zone known as the Kuiper Belt.

This illustration provided by NASA shows the New Horizons spacecraft. The probe whipped past Pluto in 2015 and is headed to 2014 MU69 for an attempted 2019 flyby of the tiny, icy world on the edge of the solar system

MU69 is thought to be 10 times larger and 1,000 times more massive than average comets, including the one being orbited right now by Europe’s Rosetta spacecraft.

On the other end, MU69 is barely 1 percent the size of Pluto and perhaps one-ten-thousandth the mass of the dwarf planet. So the new target is a good middle ground, according to scientists.

The spacecraft was recently approved for its extended mission, allowing it to continue on its path toward the object deeper in the Kuiper Belt.

It’s expected that New Horizons will make its approach to the ancient object on January 1, 2019.

The latest findings confirm theories that there is more UV light beyond the theorised location of the wall surrounding our solar system.

‘It’s really exciting if these data are able to distinguish the hydrogen wall,’ said space scientist David McComas of Princeton University, who was not involved in the research.

New Horizons is expected to jet past Ultima Thule – the most distant object within the solar system, on New Years Day 2019.

It will then continue to look for the wall about twice a year until the mission reaches its conclusion, which is expected to be around 10-15 years from now, says Randy Gladstone of the Southwest Research Institute in San Antonio.

If the levels of UV light detected ever take a nosedive, the researchers say this could prove the craft has left the wall in its wake, much like Voyager 1 did in 2013.

WHERE ARE THE VOYAGERS NOW?

Voyager 1 is currently 13 billion miles away from Earth, travelling northward through space.

The probe has recently sent back data to Nasa that cosmic rays are as much as four times more abundant in interstellar space than in the vicinity of Earth.

This suggests that the heliosphere, the region of space that contains our solar system’s planets, may act as a radiation shield. 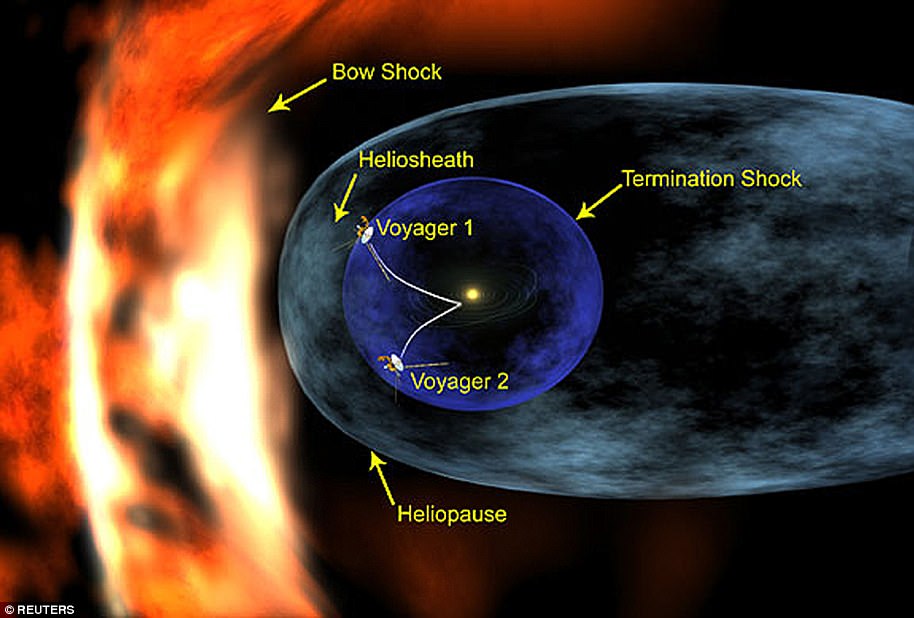 Where they are: This graphic shows where our solar system’s final frontier, the heliosheath, fits in relation to our galaxy. The interstellar wind collides with the heliosheath and forms a structure called the bow shock (red and orange areas, forcing the heliosheath into a long, teardrop shaped structure. Voyager 1 has reached the final frontier of our solar system, having travelled through a turbulent place where electrically charged particles from the Sun crash into thin gas from interstellar space.

The contrasting locations of the two spacecraft allow scientists to compare two regions of space where the heliosphere interacts with the interstellar medium.

Once Voyager 2 crosses into the interstellar medium, scientists will be able to sample the medium from two different locations at the same time.