NASA shared a festive image of a ‘crimson ornament’ shaped gas bubble in honor of the holiday season.

Snapped by the Hubble Space Telescope, the gleaming red sphere sits 160,000 light-years away in a nearby galaxy and was formed by the explosion of a supernova.

Astronomers believe the supernova was 400 years old as seen from Earth and may have been visible to Southern Hemisphere observers around the year 1600.

The gas ring, or what is formally known as SNR 0509-67.5, is a visible remnant of a Steller explosion that occurred in the Large Magellanic Cloud (LMC). 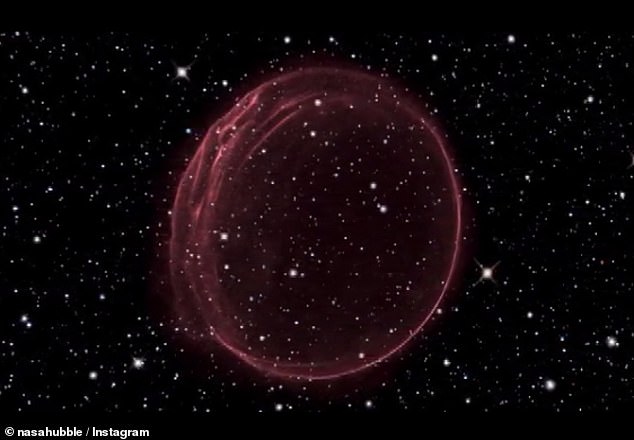 Snapped by the Hubble Space Telescope, the gleaming red sphere sits 160,000 light-years away in a nearby galaxy and was formed by the explosion of a supernova

NASA shared the image on Instagram with a post that reads: ‘Resembling a crimson holiday ornament, this sphere of gas is the result of gas being shocked by the blast wave from a supernova explosion.’

The American space agency suggests the ripples in the bubble’s surface could have been cause by different variations in the density of the gas.

The ornament shaped body is 23 light-years across and is expanding at more than 11 million miles per hour.

‘Astronomers have concluded that the explosion was one of an especially energetic and bright variety of supernovae,’ NASA explained in a statement.

‘Known as Type Ia, such supernova events are thought to result from a white dwarf star in a binary system that robs its partner of material, takes on much more mass than it is able to handle, and eventually explodes.’

The supernova remnant was captured on October 28, 2006, but NASA thought it was fitting to share again, as the holidays are just around the corner.

‘With an age of about 400 years as seen from Earth, the supernova might have been visible to Southern Hemisphere observers around the year 1600,’ explained NASA

‘ However, there are no known records of a “new star” in the direction of the LMC near that time.’