NASA took the unusually blue photo of Mars in the Cerberus region of Mars, near the Martian volcano Elysium Mons. The picture shows the Cerberus Fossae, which are a series of deep fissures running alongside one another. The fissures are believed to have formed when the planet’s crust pulled itself apart. This part of the Red Planet is now home to active landslides, represented in the photo by bright blue boulders.

NASA said: “Cerberus Fossae is a steep-sided set of troughs cutting volcanic plains to the east of Elysium Mons.

“First, the light bluish boulders on the slope appear to originate at a layer of bedrock, also light blue, near the top of the section.

“Second, the dark think lines are recurring slope lineae, probably also due to mass wasting, but composed of finer-grained materials. 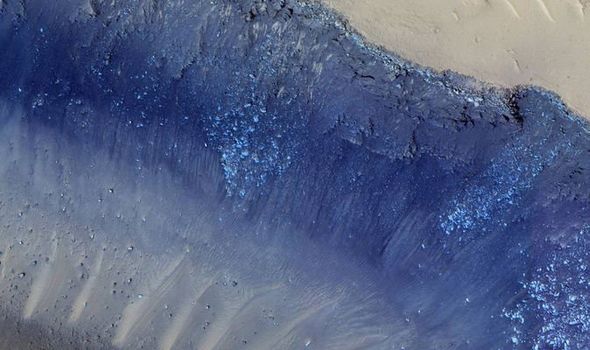 “This image was captured by the HiRISE camera on the Mars Reconnaissance Orbiter.”

The MRO’s primary objective was to scan the Red Planet for evidence of surface water, past and present.

However, once in a while the MRO diverts its attention from Mars to catch a quick glance of its home planet.

On January 6, 2017, NASA revealed a stunning photo of the Earth and the Moon snapped by spacecraft.

“The images were taken to calibrate HiRISE data, since the reflectance of the moon’s Earth-facing side is well known. 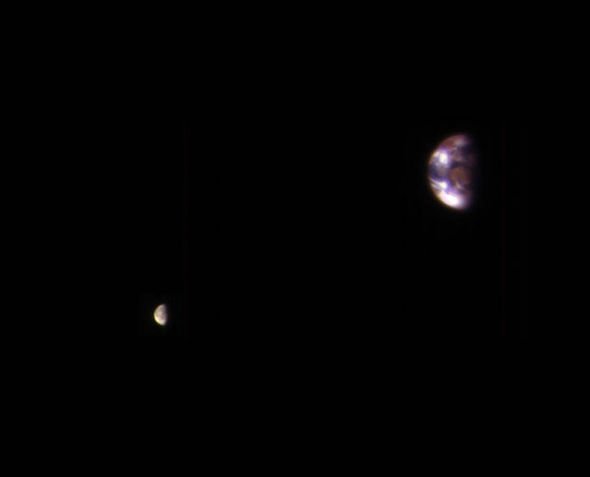 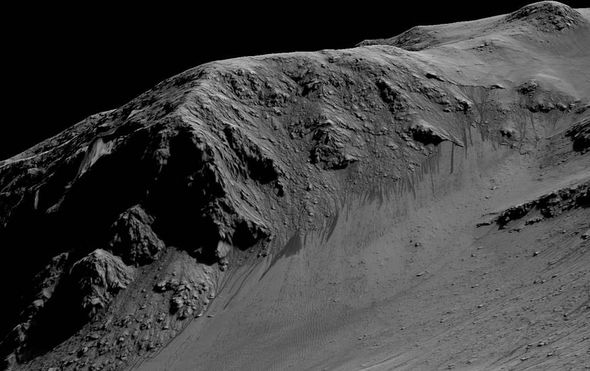 “For presentation, the exposures were processed separately to optimise detail visible on both Earth and the Moon.

“The Moon is much darker than Earth and would barely be visible if shown at the same brightness scale as Earth.”

“The combined view retains the correct positions and sizes of the two bodies relative to each other.

“The distance between Earth and the moon is about 30 times the diameter of Earth.”