NASA has revealed a few more details on how, and when, it will take humans back to the surface of the moon.

In an update to the Artemis mission, NASA announced its goal of putting astronauts on the moon by 2024 will cost $28 billion.

The majority of this ($16 million) will be spent on the lunar landing module which will carry three people, including one woman, to the moon.

However, NASA has a track record of missing its targets and exceeding its budgets, with the beleaguered James Webb telescope a prime example.

Professor Christopher Conselice from the University of Nottingham told MailOnline the 2024 date may well be technologically possible, but not on the current budget.

‘It is extremely unlikely that that deadline will be met,’ he says.

‘Billions of dollars more per year are required and were originally budgeted when Artemis was proposed.

‘It’s likely the goal can be reached, but not by 2024, and the delay will depend on many factors including who wins the 2020 presidential election.’ 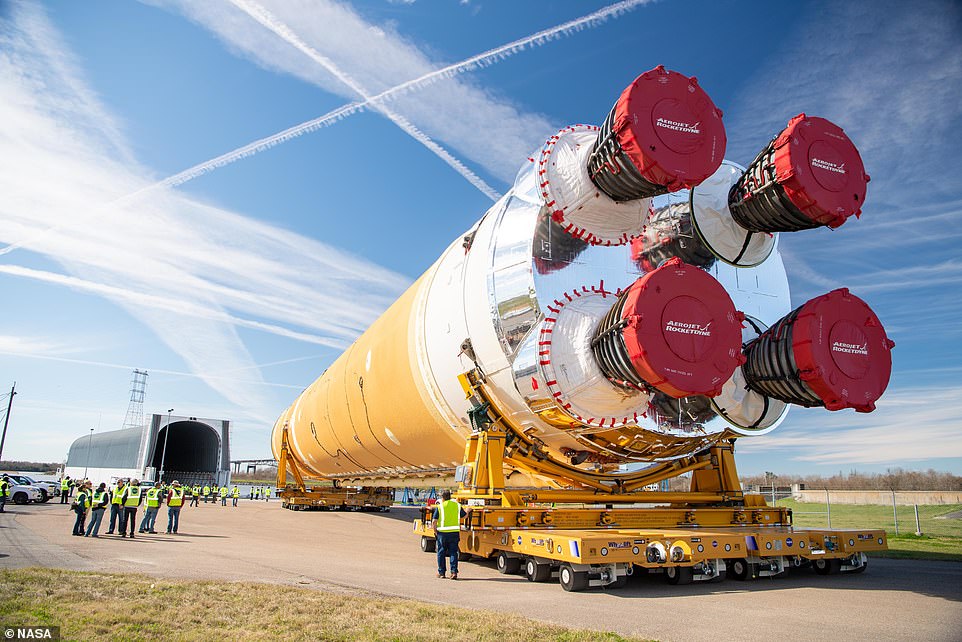 The first step for Artemis is an unmanned launch, called Artemis I, which is scheduled for November 2021, with the giant rocket SLS (pictured) 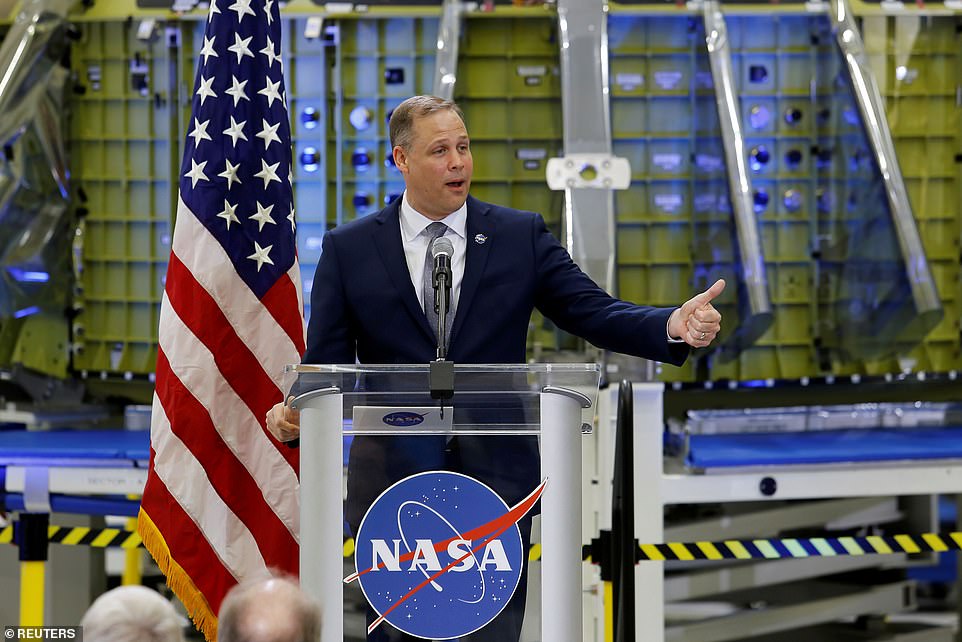 NASA administrator Jim Bridenstine (pictured here in 2019) noted that ‘political risks’ and not engineering challenges were often the biggest threat to NASA’s work, especially before an election

Congress, which faces elections on November 3, will have to sign off on the financing for the project, which Donald Trump has declared a top priority.

NASA administrator Jim Bridenstine noted that ‘political risks’ and not engineering challenges are often the biggest threat to NASA’s work, especially before an election.

For example, the decision by Barack Obama to cancel a planned Mars mission undid billions of dollars of work which was signed off by George W Bush.

Mr Bridenstine said that if the 2024 timeline is to be adhered to, the first chunk of Government funding ($3.2billion) must be approved by congress by Christmas.

‘To be clear, we’re going to the South Pole,’ he added, ruling out the sites of the Apollo landings on the Moon’s equator between 1969 and 1972.

‘There’s no discussion of anything other than that.’

This trip for three intrepid explorers to go to the lunar south pole relies on two previous steps being successful, NASA announced.

The first is the unmanned launch of Artemis I, scheduled for November 2021, with the giant rocket SLS.

SLS is built by rocket and is intended to be the vehicle that will propel humanity back to the moon. It is currently in its test phase.

This scheduled launch will be the first time Orion takes off atop SLS.

The vehicle which will take the astronauts to the surface is currently under development and will be built by one of three private companies.

NASA is currently deciding whether to allocate the contract to Blue Origin (owned by Jeff Bezos), SpaceX (owned by Elon Musk), or Dynetics.

An estimated $16billion of the announced budget will go to this cause. The second step which must be achieved before the 2024 date is Artemis II.

This 2023 launch will be reminiscent of  Apollo 10 and is intended to act as a crewed dress rehearsal for the 2024 mission.

On-board astronauts will separate from the propulsion stage and practice manually approaching and moving away from it as practice for future missions.

They will also perform proximity operations and docking manners which will help inform the 2024 touchdown, dubbed Artemis III.

This launch is the one NASA has been building up to and will take the first humans to the lunar surface in more than 50 years.

Unlike Apollo 11, where the astronauts had less than a day on the moon, Artemis III will stay there for a week.

The mission will also feature two to five ‘extravehicular activities.’ These will be performed courtesy of a space RV made by Japan.

‘The science that we would be doing is really very different than anything we’ve done before,’ said Mr Bridenstine.

‘We have to remember during the Apollo era, we thought the moon was bone dry. Now we know that there’s lots of water ice and we know that it’s at the South Pole.’