NASA’s Parker Solar Probe made the closest ever flyby of the Sun in August last year, collecting enormous amounts of data using cutting-edge scientific instruments from a distance of 15 million miles (24 million km). The first tranche of data may help solve long-standing mysteries, including why the Sun’s atmosphere is hundreds of times hotter than its surface and the precise origins of the solar wind.

They could also help us find new ways to protect astronauts from harsh space weather during long distance trips through the Solar System.

Professor Stuart Bale, a physicist at the University of California who led the analysis, said: “The complexity was mind-blowing when we first started looking at the data.

“Now, I’ve gotten used to it. But when I show colleagues for the first time, they’re just blown away.

“The first three encounters of the solar probe that we have had so far have been spectacular.

“We can see the magnetic structure of the corona, which tells us that the solar wind is emerging from small coronal holes; we see impulsive activity, large jets or switchbacks, which we think are related to the origin of the solar wind. 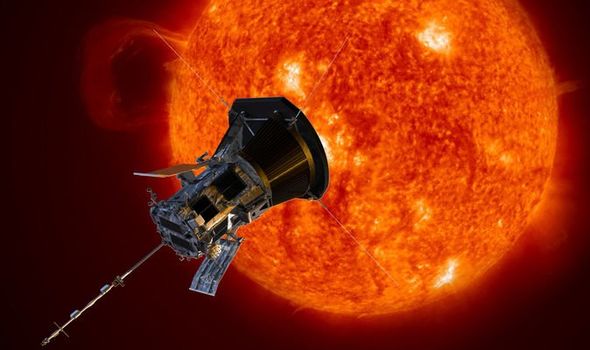 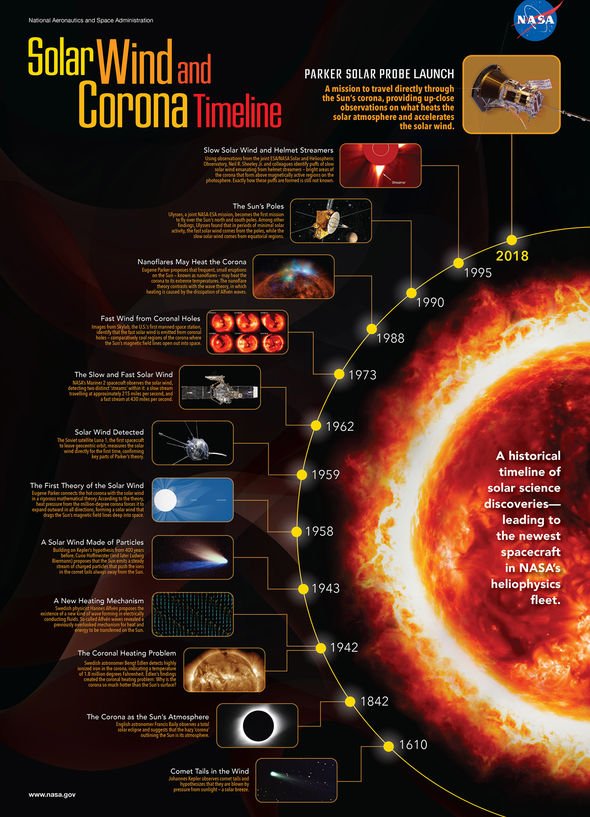 “And we are also surprised by the ferocity of the dust environment.”

Over the next six years, the car-sized NASA spacecraft will continue its ever-closer elliptical orbit, eventually swooping so near the Parker Solar Probe will technically “touch” the star.

A drawback of being at such close quarters is the NASA probe cannot beam pictures back.

The spacecraft’s instruments consequently permanently peer sideways, measuring the stream of supersonic charged particles that make up the solar wind.

Scientists had previously observed how the Sun’s wind appears to have two main components: a “fast” one travelling at around 434 miles per second (700km per second), which comes from giant coronal holes in the Sun’s polar region.

There is also a “slow” wind, travelling below 310 miles per second, whose origin is unknown.

Coronal holes are cooler, less dense regions, through which magnetic fields stream out into space, acting as channels for the charged particles to flow along.

The observations also point to an explanation for why the corona is so blisteringly hot. 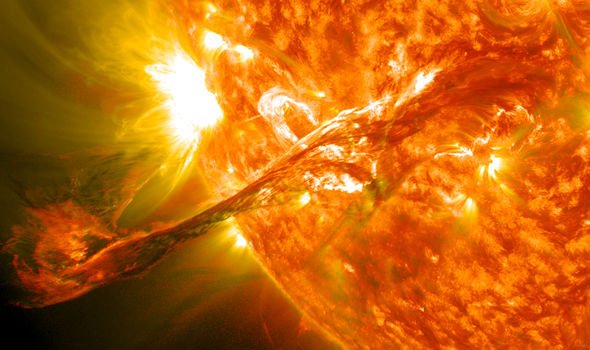 Professor Tim Horbury, a co-investigator on the Parker Solar Probe Fields, said: “The corona (atmosphere) is a million degrees, but the Sun’s surface is only thousands.

“It’s as if the Earth’s surface temperature were the same, but its atmosphere was many thousands of degrees.

How can that work? You’d expect to get colder as you moved away.”

Parker’s sidelong observations revealed that the particles in the solar wind appeared to be released in explosive jets, rather than being radiated out in a steady stream.

It is hoped this rapid release of energy from the Sun’s core into its atmosphere could help explain why the atmosphere is so staggeringly hot compared to the solar surface.

Another surprise of scientists was the dustiness of the area close to our star.

During the nearest approach of its orbit, the probe was peppered with this cosmic dust, chipping tiny pieces off its heat shield, showing as white streaks in images captured by the cutting-edge NASA camera.

The dust is believed to be the remains of asteroids and comets that made close approaches to the Sun, causing them to incinerate, leaving only a dusty haze behind.

The new observations were made when Parker was about 15 million miles (24 million km) from the Sun, but NASA’s Parker Solar Probe will eventually fly to approximately six million km from its surface. 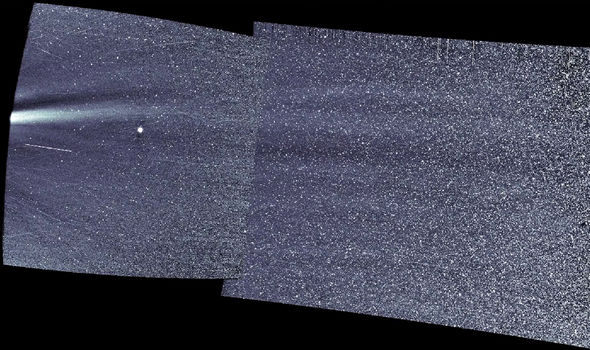 This will be more than seven times closer than the previous closest mission, NASA’s Helios 2 spacecraft in 1976.

The extreme conditions faced by Parker has required the use of unconventional materials and spacecraft design.

The NASA probe’s white ceramic heat shields will reach a temperature of nearly 1,400C (2,552F) during the mission’s closest approach.

As Parker passes close to the Sun, its solar panels are retracted into the shadow of the heat shield, with only a tiny area remaining exposed to generate power.

The craft has also broken the record for the fastest moving spacecraft, relative to the sun.