Home » Science » NASA shares image of a &apos;cosmic candy cane&apos; in image of the Milky Way

Even SPACE is feeling festive! Stunning ‘cosmic candy cane’ appears at center of the Milky Way in colorful composite image from NASA camera

NASA shared a festive image of a ‘cosmic candy cane’ just in time for the holidays.

A structure resembling the Christmas treat was spotted in a colorful composite image of the Milky Way galaxy.

The feature spans 190 light-years and is one of a set of long, thin strands of ionized gas called filaments that emit radio waves.

The stunning image was captured by NASA’s Goddard-IRAM Superconducting 2-Millimeter Observer (GISMO) camera, which is used in combination with a radio telescope located on Pico, Veleta Spain.

Johannes Staguhn, an astronomer at Johns Hopkins University in Baltimore who leads the GISMO team at Goddard, said: ‘GISMO observes microwaves with a wavelength of 2 millimeters, allowing us to explore the galaxy in the transition zone between infrared light and longer radio wavelengths.’

A structure resembling the Christmas treat was spotted in a colorful composite image of the Milky Way galaxy. The feature spans 190 light-years and is one of a set of long, thin strands of ionized gas called filaments that emit radio waves

‘Each of these portions of the spectrum is dominated by different types of emission, and GISMO shows us how they link together.’

The most prominent radio filament in the galactic center, known as the Radio Arc, forms the straight portion of the cosmic candy cane.

And it is the shortest wavelength at which these curious structures have been observed.

Scientists say the filaments delineate the edges of a large bubble produced by some energetic event at the galactic center, located within the bright region known as Sagittarius A about 27,000 light-years away from us – additional red arcs in the image reveal other filaments.

Richard Arendt, a team member at the University of Maryland, Baltimore County and Goddard, said: ‘It was a real surprise to see the Radio Arc in the GISMO data.’ 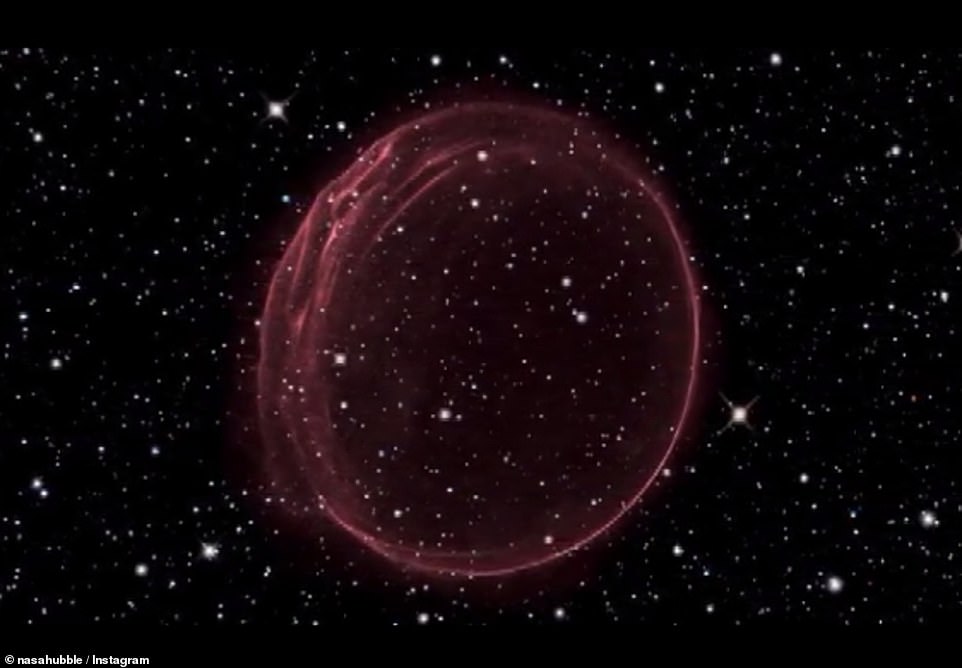 Earlier this month NASA shared another festive image snapped by the Hubble Space Telescope that shows a ‘crimson ornament’ shaped gas bubble. Astronomers believe the supernova is 400 years old as seen from Earth and may have been visible to Southern Hemisphere observers around the year 1600

‘Its emission comes from high-speed electrons spiraling in a magnetic field, a process called synchrotron emission.

‘Another feature GISMO sees, called the Sickle, is associated with star formation and may be the source of these high-speed electrons.’

The image highlights the center part of our galaxy, which is home to some of the largest and densest group of giant molecular clouds in the Milky Way.

These clouds contain dense gas and dust, and enough to form tens of millions of stars similar to Earth’s son.

The entire view is about 1.6 degrees across — equivalent to roughly three times the apparent size of the Moon — or about 750 light-years wide.

Astronomers believe the supernova is 400 years old as seen from Earth and may have been visible to Southern Hemisphere observers around the year 1600.

The gas ring, or what is formally known as SNR 0509-67.5, is a visible remnant of a Steller explosion that occurred in the Large Magellanic Cloud (LMC).

NASA shared the image on Instagram with a post that reads: ‘Resembling a crimson holiday ornament, this sphere of gas is the result of gas being shocked by the blast wave from a supernova explosion.’

The American space agency suggests the ripples in the bubble’s surface could have been cause by different variations in the density of the gas.

The ornament shaped body is 23 light-years across and is expanding at more than 11 million miles per hour.

‘Astronomers have concluded that the explosion was one of an especially energetic and bright variety of supernovae,’ NASA explained in a statement.

‘Known as Type Ia, such supernova events are thought to result from a white dwarf star in a binary system that robs its partner of material, takes on much more mass than it is able to handle, and eventually explodes.’

The supernova remnant was captured on October 28, 2006, but NASA thought it was fitting to share again, as the holidays are just around the corner.

‘With an age of about 400 years as seen from Earth, the supernova might have been visible to Southern Hemisphere observers around the year 1600,’ explained NASA

‘ However, there are no known records of a ‘new star’ in the direction of the LMC near that time.’