NASA shuts two facilities building rockets that will help land the first woman on the Moon in 2024 after an employee tests positive for coronavirus.

The space agency is shutting down the Michoud Assembly Facility in New Orleans and the Stennis Space Centre in Mississippi to stop the spread of COVID-19.

This is a massive blow to the NASA Artemis mission that would have seen the first unmanned lunar orbit of the Orion spacecraft happen as early as next year.

The giant Space Launch System rocket that will get the Orion spacecraft off the Earth is being built at the two closed facilities. 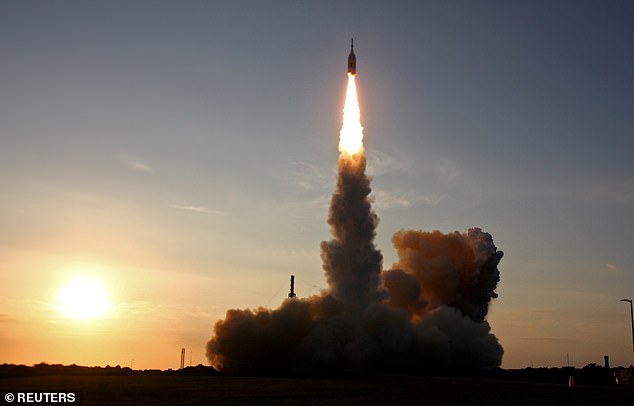 The Ascent Abort-2 flight test of NASA’s Orion spacecraft’s emergency launch abort system lifts off from the Cape Canaveral Air Force Station in Cape Canaveral, Florida, U.S. There will be a delay to the Artemis mission of which Orion is part due to the closures 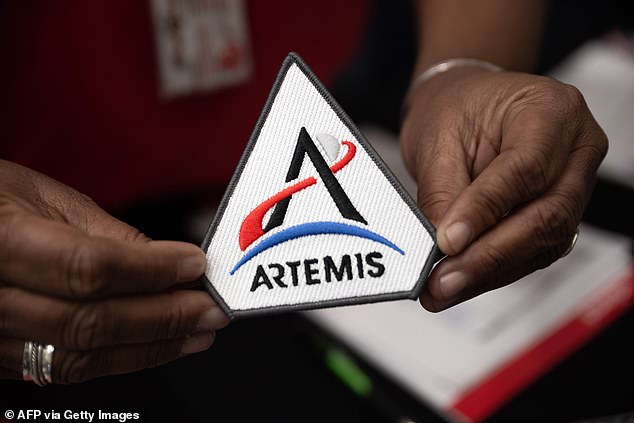 NASA employee holds the official Artemis mission patch at NASA Plum Brook Station in Sandusky, Ohio on March 14, 2020. It is unlikely NASA will still be able to launch for the Moon in 2024 due to coronavirus closing rocket faciliites

NASA Administrator Jim Bridenstine said they were closely following the advice of health professions on coronavirus to keep their workforce safe.

“Although a limited amount of employees have tested positive for COVID-19, it is imperative that we take this pre-emptive step to thwart further spreading of the virus among the workforce and our communities,’ he said.

The Space Launch System rocket, that will eventually launch Orion towards the Moon is being built at the Michoud Assembly Facility in New Orleans.

The Stennis Space Centre in Mississippi is testing the first booster for the massive rocket launch system.

‘The NASA and contractors teams will complete an orderly shutdown that puts all hardware in a safe condition until work can resume.

‘Once this is complete, personnel allowed onsite will be limited to those needed to protect life and critical infrastructure.’

NASA haven’t been able to say exactly what impact it will have on the timeline for the Artemis lunar missions or other missions as they don’t know how long the shut down will last.

‘We realise there will be impacts to NASA missions, but as our teams work to analyse the full picture and reduce risks we understand that our top priority is the health and safety of the NASA workforce,’ said Bridenstine. 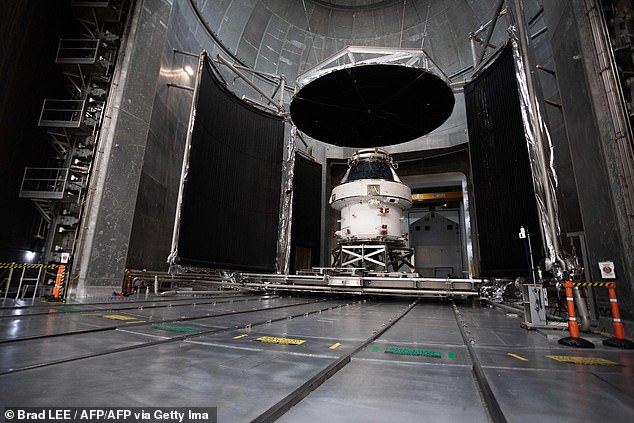 Orion Spacecraft is seen at NASA Plum Brook Station in Sandusky, Ohio. The spacecraft will eventually ferry astronauts from Earth to the Moon but the exact date remains up in the air after coronavirus closed rocket construction facilities

The USA now has 13,572 confirmed cases of coronavirus and 183 deaths from the deadly respiratory virus.

The delays are going to impact the construction of the Space Launch System and the Orion capsule that would carry astronauts to the Moon.

NASA expects the unmanned test flight of Orion to be delayed until after 2021.

The Kennedy Space Center in Florida is fully operational but could be closed if the virus continues to spread. Kennedy is where the Perseverance rover – scheduled to launch for Mars in July or August – is being built.

The European Space Agency has already delayed its planned launch of the Rosalind Franklin Mars Rover until 2024 due to delays in essential tests.