NASA unveiled its plans to launch a gigantic balloon attached to a telescope for examining stars and gases in the cosmos.

The project, called ASTHROS, short for Astrophysics Stratospheric Telescope for High Spectral Resolution Observations at Submillimeter-wavelengths, will use a football field-sized balloon to hoist a telescope into the stratosphere – about 130,000 feet into the air.

NASA says that, when fully inflated, the balloons are 400 feet (150 meters) wide and tentatively plans to launch on December 2023 from Antarctica. 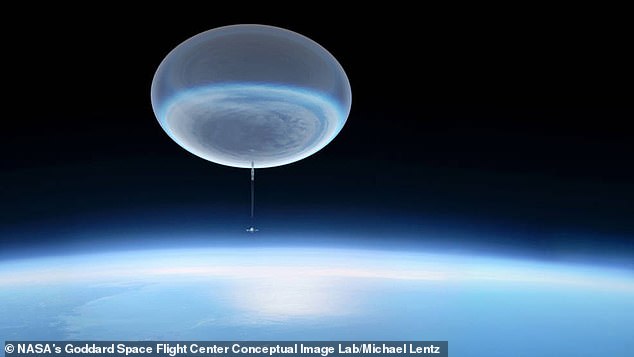 The balloon (rendered) will ascend 130,000 feet from Earth’s surface into the stratosphere and use a telescope to examine wavelengths not seen from Earth

Once lifted into the stratosphere ASTHROS will observe wavelengths that aren’t currently visible from the ground  in an effort to measure the motion and speed of gas around newly-formed stars.

NASA says that during flight, the mission will study four targets, including two star-forming regions in the Milky Way galaxy.

The mission will also, for the first time, detect and map the presence of two specific types of nitrogen ions which can suss out places where winds from massive stars and supernova explosions have reshaped gas clouds within star-forming regions.

ASTHROS will also make the first detailed 3D maps of the density, speed, and motion of gas in star-forming regions to see how newborn stars influence their environment.

NASA hopes to understand how stellar feedback – a critical process in star formation – works and to help improve computer simulations of galaxy evolution.

NASA says that while balloons may seem low-tech compared to other space missions, the technology has several benefits over fuel-based deployments.

‘[The] missions don’t only have lower costs compared to space missions, they also have shorter times between early planning and deployment, which means they can accept the higher risks associated with using new or state-of-the-art technologies that haven’t yet flown in space,’ writes NASA in a statement. 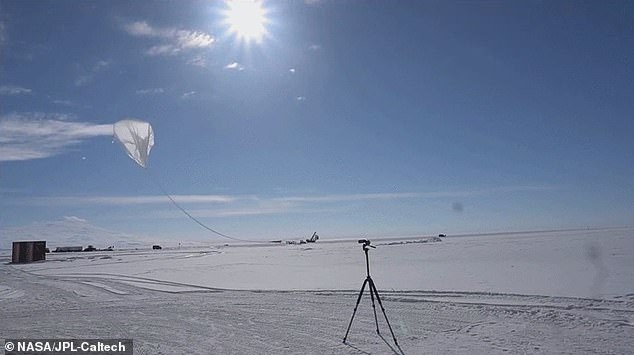 Pictured is the launch of the Stratospheric Terahertz Observatory II (STO-2), a NASA astrophysics mission, from Antarctica in 2016. NASA says high-altitude balloon missions provide the opportunity to observe wavelengths of light that are blocked by Earth’s atmosphere.

NASA also says that the mission will attempt to take measurements never-before-seen by the agency.

‘With ASTHROS, we’re aiming to do astrophysics observations that have never been attempted before,’ said JPL engineer Jose Siles, project manager for ASTHROS.

‘The mission will pave the way for future space missions by testing new technologies and providing training for the next generation of engineers and scientists.’