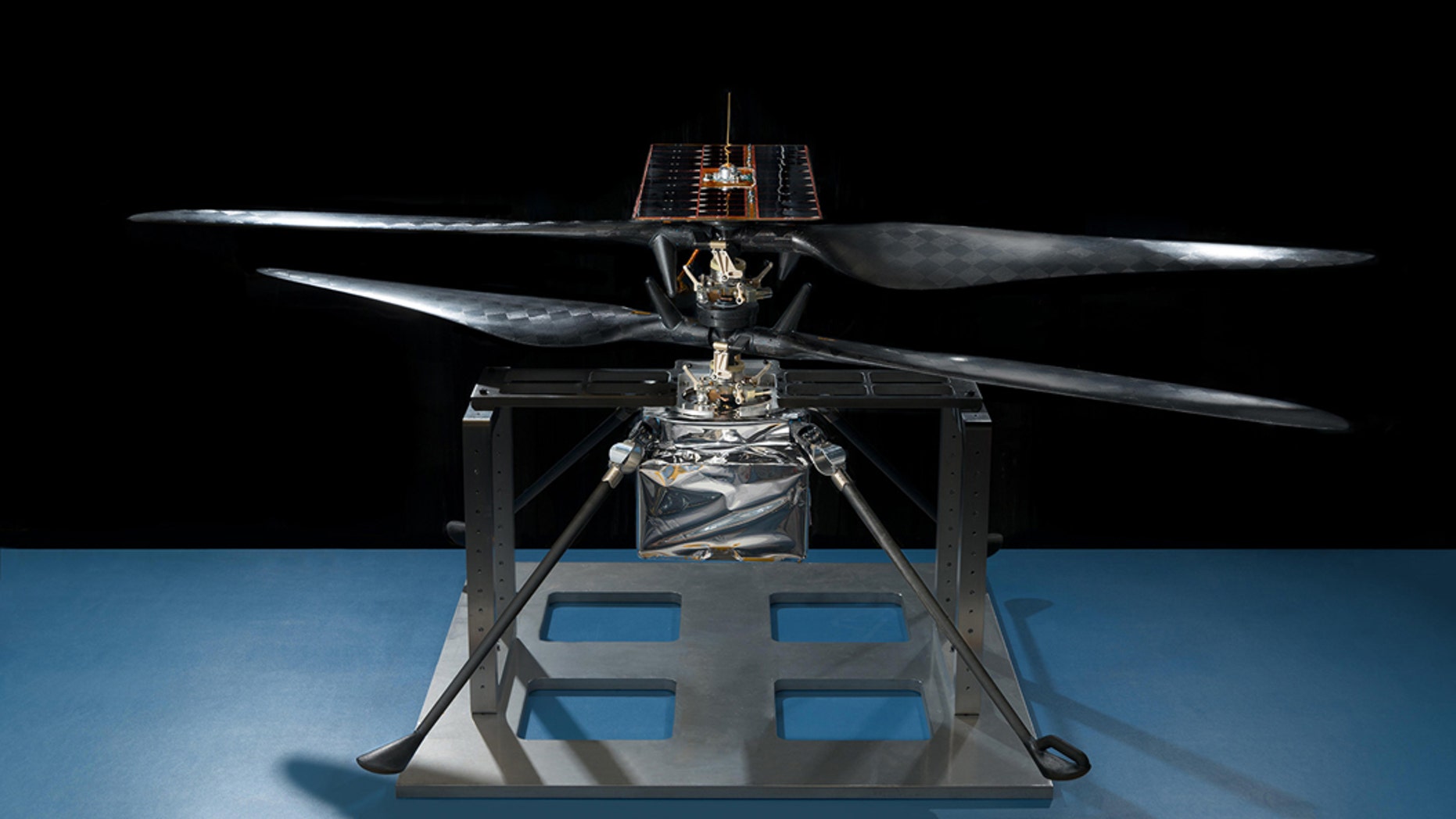 This image of the flight model of NASA’s Mars Helicopter was taken on Feb. 14, 2019, in a cleanroom at NASA’s Jet Propulsion Laboratory in Pasadena, California. The aluminum base plate, side posts, and crossbeam around the helicopter protect the helicopter’s landing legs and the attachment points that will hold it to the belly of the Mars 2020 rover. (Credit: NASA/JPL-Caltech )

The Mars Helicopter flight demonstration project will launch next summer with the Mars 2020 rover and touch down on the Red Planet in February  2021.

While the rover searches for signs of past life on the Red Planet and caches samples for future return to Earth, the helicopter will soar above Mars in a series of demonstration flights. Future missions could see such helicopters scouting ahead for where rovers could go next.

"Nobody's built a Mars helicopter before, so we are continuously entering new territory," MiMi Aung, project manager for the Mars Helicopter at NASA's Jet Propulsion Laboratory (JPL) in Pasadena, California, said in a statement.

Back in January, the flight model flew in a simulated Martian environment at JPL's Space Simulator, a vacuum chamber that has a diameter of 25 feet (roughly 8 meters). Then it was moved to a Lockheed Martin Space facility in Denver.

At its new location, the helicopter was tested for compatibility with the Mars Helicopter Delivery System. This system will carry the helicopter under the Mars 2020 rover's belly during launch and cruise to Mars. The helicopter will separate from the rover after landing.

In Denver, the connections and mechanisms between the delivery system and helicopter were tested to make sure they fit together. The mated system experienced vibrations similar to what happens during launch and cruise. Also, the helicopter and delivery system were put into a thermal vacuum chamber to see how they performed in cold temperatures (minus 200 degrees Fahrenheit, or minus 129 degrees Celsius), similar to the conditions they'll experience in deep space and on the Martian surface.

With these tests complete, the helicopter went back to JPL on May 11 for several more procedures, including spinning up the rotor blades and installing a new solar panel. More testing is ahead, but the end is in sight — at least for work here on Earth

"We expect to complete our final tests and refinements and deliver the helicopter to the High Bay 1 clean room for integration with the rover sometime this summer," Aung said, "but we will never really be done with testing the helicopter until we fly at Mars."

Since the helicopter is a demonstrator, it has no science instruments on board; rather, its main purpose is to show that powered flight in the Martian atmosphere is achievable. The Red Planet's air is just 1% as dense as that of Earth.

Even if the minicoptercan take flight, there are other obstacles to overcome, such as the time lag involved in controlling it from Earth. (It takes between 4 minutes and 24 minutes for signals to travel between Earth and Mars, depending on the positions of the two planets in space.) Imaging will also be tested to see the helicopter's capabilities for transmitting high-resolution color photos.

"Future Mars missions could enlist second-generation helicopters to add an aerial dimension to their explorations,' NASA officials added in the statement. "They could investigate previously unvisited or difficult-to-reach destinations such as cliffs, caves and deep craters, act as scouts for human crews or carry small payloads from one location to another. But before any of that happens, a test vehicle has to prove it is possible."