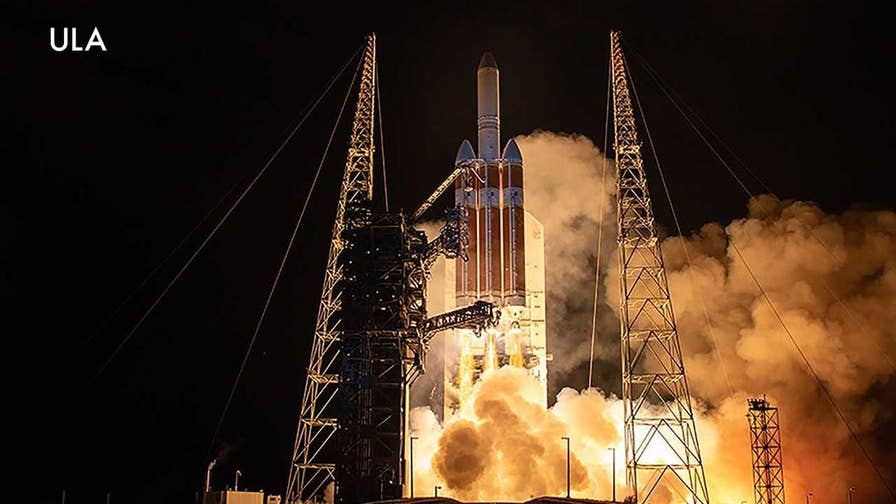 NASA's Parker Solar Probe blasts off from Cape Canaveral on its mission to the Sun.

NASA’s Parker Solar Probe has deployed key instruments on its historic journey to the Sun.

The probe blasted off on its odyssey to the star in the early hours of Aug. 12, 2018.  At 11 a.m. EDT Thursday, the spacecraft was 16.27 million miles from Earth, traveling at 45,860 miles per hour, according to NASA. The average distance between the Sun and Earth is 93 million miles.

The $1.5 billion mission will take humanity closer to the Sun than ever before. Parker will be the first spacecraft to fly through the Sun’s corona, the outermost part of the star’s atmosphere. It is expected to arrive at the Sun in November.

To withstand heat of nearly 2,500 degrees Fahrenheit, the probe is protected by a special 4.5-inch-thick carbon-composite shield.

An artist’s concept of Parker Solar Probe in space. The FIELDS antennas extend out from behind the heat shield, and the Solar Probe Cup is visible on the right. (Credit: NASA/JHUAPL)

On Sunday, four two-meter (6.6-feet) electric field antennas were deployed on the spacecraft. “These antennas (as well as a fifth, which is mounted on the long boom at the other end of Parker Solar Probe) need to be extended away from the spacecraft to accurately measure the electric fields of the corona,” explained Johns Hopkins University Applied Physics Lab, which designed and built the probe.

Because they are not protected by the probe’s heat shield, the antennas are constructed from niobium C-103, a high-temperature alloy that can withstand intense heat, the Lab said.

Just after the antennas were deployed, the covers of the Solar Probe Analyzer (SPAN) instruments were opened. “The SPAN instruments are used to measure the solar wind when it is coming in at an angle relative to the spacecraft,” scientists said in the blog post.

Voltages on the Solar Probe Cup (SPC) that measures thermal solar wind plasma were also ramped up. Pointed directly at the Sun, the SPC is mounted outside the spacecraft’s heat shield and is also built from niobium C-103.

Additionally, the Probe’s high gain antenna, which is used to send high-rate science data back to Earth, has been moved through its full range of motion, according to the Applied Physics Lab.

Two Energetic Particle Instruments have also been turned on and checked, along with the spacecraft’s Wide-field Imager for Solar Probe (WISPR).

Harnessing Venus’ gravity, Parker will complete seven flybys over seven years to gradually bring its orbit closer and closer to the Sun. On its closest approach in 2024, the probe will be traveling at approximately 430,000 mph, setting a new speed record for a manmade object.

On Aug 31., flight controllers at Johns Hopkins Applied Physics Laboratory performed a seven-minute and 4-second thruster burn to adjust the probe’s direction prior to its Venus flyby on Oct. 3.