Neanderthals dived for clams and swam up to 13 feet underwater off the Italian coast 100,000 years ago

Neanderthals are often viewed as brutish, plodding beasts that were driven to extinction by the superior intellect of Homo sapiens.

But new evidence shows an elegant streak to our early cousins, as a study reveals they sought out materials for tools from the seafloor, up to 13 feet underwater.

Scientists found 171 shells dating back 100,000 years at an Italian cave and proved almost a quarter of them were lying on the seabed when they were plucked by a diving Neanderthal.

The rest of the clamshells — three quarters of them — are thought to have washed up on the beach naturally during the Middle Palaeolithic period.

Many of these shells, together with volcanic rock from the Mediterranean sea and shore, were fashioned into tools such as scrapers, the study found. 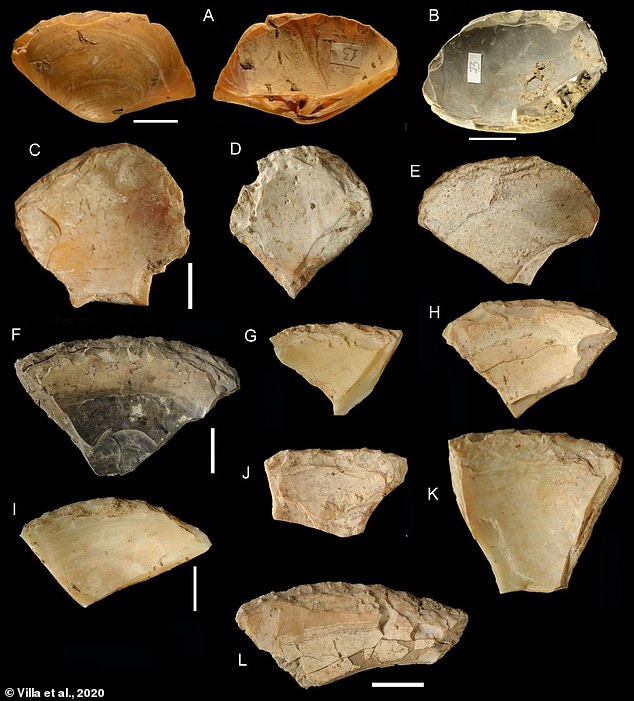 General morphology of retouched shell tools, Figs C-L are from the Pigorini Museum. A and B are taken from the study after being found in Grotta dei Moscerini. Almost a quarter of the shells in the cave were shiny and smooth on the exterior,signs they were taken from the seafloor

The scientists from University of Colorado at Boulder say this proves Neanderthals had started pillaging the ocean for resources long before Homo sapiens took over.

The findings come from discoveries made in Grotta dei Moscerini, a cave that sits ten feet above a beach in what is today the Latium region of central Italy.

Neanderthals also collected volcanic rock from the beach and coastal waters, according to the study published in the PLOS ONE journal.

The ancient humans are known to have used tools, but the extent to which they were able to exploit coastal resources has been less clear.

Dr Paola Villa at the University of Colorado Boulder said: ‘The fact they were exploiting marine resources was something that was known.

‘But until recently, no one really paid much attention to it.’

In this study, researchers explored artefacts from the cave, one of two Neanderthal sites in Italy with an abundance of hand-modified clam shells.

The authors examined shells which had been often retouched to be used as scrapers. 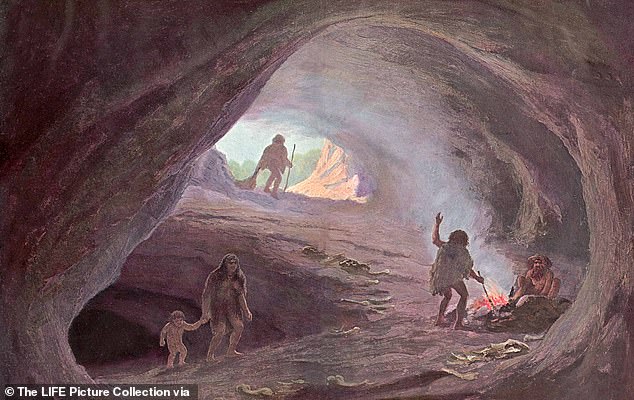 In the study by researchers at the University of Colorado at Boulder studied artefacts from the cave, one of two Neanderthal sites in Italy with an abundance of hand-modified clam shells (pictured, artist’;s impression of a Neanderthal-inhabited cave)

They found that nearly three quarters of the Moscerini shell tools had opaque and slightly faded exteriors, as if they had been sanded down over time.

These features are consistent with what would happen if a shell washed up on a sandy beach and was repeatedly submerged beneath the tide.

However, the others were shiny and smooth on the exterior, and tended to be larger.

It is thought these were harvested directly from the sea floor and therefore were never eroded by lapsing waves.

Dr Villa said: ‘It’s quite possible that the Neanderthals were collecting shells as far down as two to four metres.

‘Of course, they did not have Scuba equipment.’ 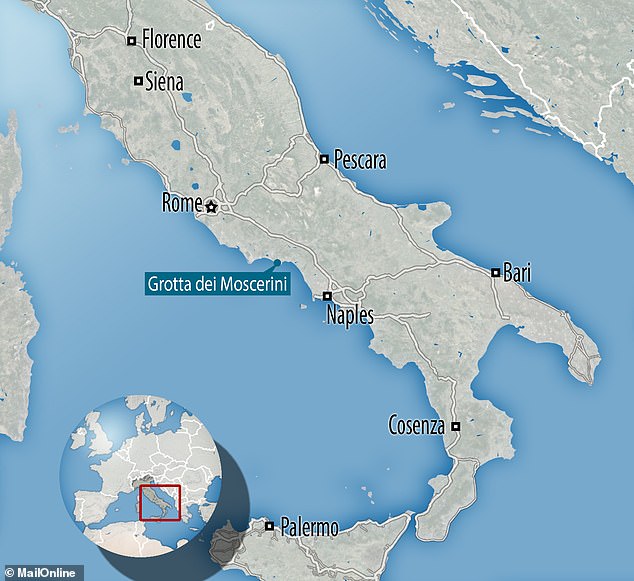 Researchers say the findings join a growing body of evidence that Neanderthals in Western Europe were in the practice of wading or diving into coastal waters to collect resources long before Homo sapiens brought these habits to the region.

The authors add: ‘Skin diving for shells or fresh water fishing in low waters was a common activity of Neanderthals.

‘Neanderthals also collected pumices erupted from volcanoes in the gulf of Naples and transported by sea to the beach.’

An earlier study also found ‘bony’ growths on the ears of a few Neanderthal skeletons.

These growths known as ‘swimmer’s ear’, can be found among aquatic sportsmen today.

Surfer’s ear, or external auditory exostoses (EAE) as they are known medically, are abnormal growths of bone within the ear canal.

They are caused by repeated exposure to cold water and wind, which makes the bones surrounding the ear canal thicken to defend the inner ear.

‘They also did things like freshwater fishing and even skin diving.’