Home » Science » Why you should NEVER swim while wearing sunscreen

Why you should NEVER swim while wearing sunscreen: Chemicals that protect us from UV rays cause deformities in fish, study finds

Slapping sunscreen on at the beach before cooling off with a swim in the ocean could be damaging sea-life, a new study has warned.

According to new research, the same chemicals used in products to protect us from harmful UV rays can trigger deformities in future generations of fish.

The find could be a ‘canary in the coal mine’ for the wider effects these chemicals have on the environment and larger animals further up the food chain, including humans, scientists have cautioned. 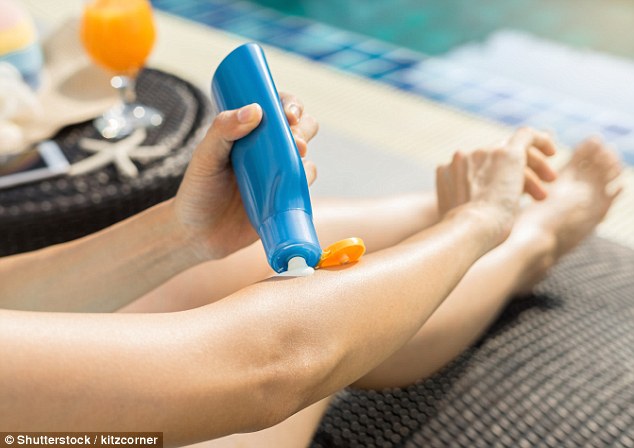 Slapping sunscreen on at the beach before cooling off in the ocean could be damaging sealife, a new study has warned. The same chemicals that protect us from harmful UV rays can cause deformities in future generations of fish (stock image)

The chemicals are found in consumer products including cosmetics, sun lotions and moisturisers and protect the wearers from the damage caused by sunlight.

However, these chemicals can easily wash off from the skin, and their presence has been detected in the environment by a number of previous studies.

UV filters are also known to disrupt key hormones – an attribute that scientists now believe could have a devastating impact on wildlife.

Researchers said the finding should set alarm bells ringing about the damage that man-made chemicals can do. 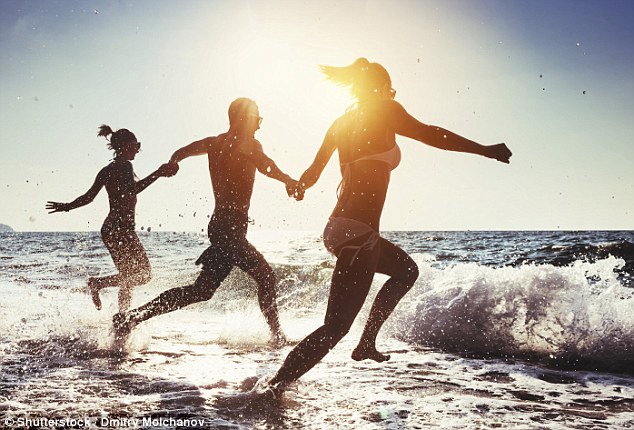 Ultraviolet filters are found in consumer products including cosmetics and sun lotions and moisturisers and protect the wearers from UV rays. But they easily wash off from the skin, and have been detected in the environment by a number of previous studies (stock image)

‘The massive production and use of UV filters has resulted in the appearance of significant amounts of these chemicals in the environment with potential bioaccumulation in both animals and humans.’

While the adverse effects of UV filters are widely known, previous research concluded that individual chemicals are not present at high-enough levels in the environment to cause harm to people or animals.

However, Dr Sze-Yin Leung investigated whether combinations of UV filters may be more harmful than individual compounds, and whether these chemicals could have long-term effects that previous studies had not considered.

WHAT ARE UV FILTERS AND HOW DO THEY IMPACT THE ENVIRONMENT?

Ultraviolet (UV) filters are chemicals in consumer products like sunscreen that help to protect us from some of the sun’s most harmful radiation.

They are found in products including cosmetics, sun lotions and moisturisers.

UV filters are designed to easily wash off the skin and have been detected in the environment by a number of previous studies.

Ingesting the chemicals has been shown to disrupt key hormones.

Scientists suggest that beach-goers using UV-filtered sunscreen may inadvertently harm wildlife when they go for a swim.

His team assessed the levels of nine common UV filters in waters on the coast of Shenzhen, China, which is home to 20 popular beaches.

The researchers found seven of the nine chemicals in Shenzhen waters, including public beaches, a harbour and, surprisingly, a reservoir for tap water.

The researchers then fed zebrafish brine shrimp that had been exposed to three of the most prevalent chemicals, both alone and in mixtures.

Although the adult fish had no visible problems, their offspring showed deformities.

The team noted these abnormalities were mostly observed when the fish were exposed to concentrations of the chemicals higher than is likely to occur in the environment.

Dr Sze-Yin Leung concluded: ‘Our study demonstrates that multiple UV filters occur in natural waters, that these substances are being transmitted through the food chain via food.

‘Like the canary in the coal mine, could these relatively small, simple organisms be warning of increasing, cumulative risks and dangers to larger organisms and indeed the ecosystem itself?’

He added that further research is needed to evaluate the full effects UV filters, and their mixtures, have on marine environments.

The study was published in the journal Environmental Science & Technology.