REVEALED: The ‘utterly bizarre’ chimera crab that lived 95 million years ago had the mouth of a shrimp, bulging larval eyes, and the shell of a lobster

Even studied researchers couldn’t help but remark at the physical characteristics of a new type of crustacean that they say ‘breaks all the rules.’

It’s dubbed the Callichimaera perplexa (perplexing beautiful chimera) after the mythological Greek monster that breathes fire and has a body of a snake, a head of a lion, and tail of a goat.

‘We started looking at these fossils and we found [the specimen] had what looked like the eyes of a larva, the mouth of a shrimp, claws of a frog crab, and the carapace of a lobster,’ said Javier Luque, lead author of the study from University of Alberta. 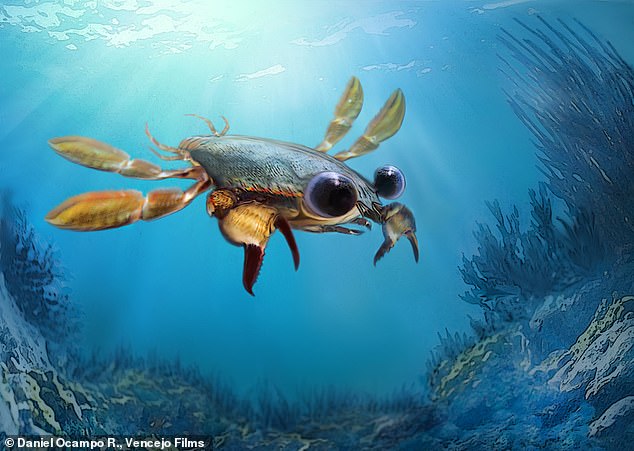 An ancient sea creatures is being called the platypus of crustaceans for its vary physical attributes.

WHAT IS THE CHIMERA CRAB?

According to researchers, a newly identified fossil reveals a surprising creature.

The ‘Chimera crab’ has the ‘eyes of a larva, the mouth of a shrimp, claws of a frog crab, and the body of a lobster.’

It likely lived in shallow water and instead of crawling like the crabs we know today, the quarter-sized creature swam.

‘We have an idea of what a typical crab looks like, and these new fossils break all those rules.’

Researchers say the fossil is 90 to 95 million years old, and while it shares similarities with many of animals we see today, the amalgam actually represents an entirely unique branch of sea-faring creatures – making it the ‘Platypus of crustaceans’ according to Luque.

The newly identified creature, discovered near the Andes Mountains in Chile, likely lived in shallow coastal areas say researchers and were about the size of a quarter, say researchers.

Because of how well the creature was preserved in its stone encasing researchers were able to reconstruct characteristics creating 3D models with surprising detail, they say.

Luque said he first discovered the specimen in 2005 and within several years started to receive examples from other places around the world, eventually totaling more than 70 fossils of varying age ranges in total, says a Live Science report.

Superficial features aside, researchers note that among the unusual characteristics were paddle like legs and large eyes which indicate that unlike the animal’s current crab brethren, they likely swam, not crawled.

According to Live Science, the discovery of the creature is notable not just for its bizarre physical features but for what it says about the evolutionary history of today’s crabs.

Today’s iterations lost and then regained their body parts throughout history as they adapted to their surroundings, says the report.

‘This discovery, from the mid-Cretaceous, illustrates that there are still surprising discoveries of more recent, weird organisms waiting to be found, especially in the tropics. It makes you wonder ‘what else is out there for us to discover?’