If scientist Roger Hanlon seems a little obsessed with octopuses, it’s because he’s been studying them for the past decade — and he thinks they could hold a key to advancements in fashion, cosmetics, and even medicine.

For years, Hanlon and his team of researchers at the University of Chicago’s Marine Biological Laboratory have been studying the unique capabilities of cephalopods, or marine animals like octopuses, squids, and cuttlefish.

On Tuesday, Hanlon presented his findings at the TED 2019 conference in Vancouver, Canada, where he argued that the skin of these animals might one day teach us how to make camouflage clothes or cosmetics that change color based on the lighting in a room.

Though some cosmetic companies are aware that the technology exists, Hanlon said it could take about a decade before octopus-inspired makeup hits the market.

The secret to developing these products lies in the way that cephalopod skin harnesses light. An octopus’ skin contains pigments and reflectors that soak up light and manipulate it into a variety of colors and patterns. This gives off vibrant, shimmering hues that “you can never get with current cosmetics,” Hanlon told Business Insider.

That is, unless you artificially replicate the concept.

To test this theory, Hanlon teamed up with John Rogers, a researcher formerly at the University of Illinois. Less than five years ago, Rogers developed small prototype patches that mimicked octopus skin, and were equipped with tiny sensors, or “eyeballs,” that could harness light. These sensors successfully picked up on patterns in their surroundings the same way cephalopod skin does in nature.

At the time, Hanlon wasn’t exactly sure why his marine animals were able to manipulate light, but Rogers proved that the process could be replicated, even without understanding the complex mechanisms behind it.

Hanlon compared the light-harnessing capacity of cephalopods to an iPhone — a “goofy little thing” that now has a “stunning” number of applications.

He refers to this process of replicating animal behavior as “bio-inspiration.”

“If you can begin to see how a biological system works in principle, then you can translate as much of the principle as your limited equipment will allow,” he told Business Insider. “That’s where the progress is.”

With the help of material scientists and engineers, Hanlon’s findings could one day be used to create camouflage clothing or mutable cosmetics that become darker under dim lighting or brighter in the presence of sunlight. That future, Hanlon said, “is not very far away.” 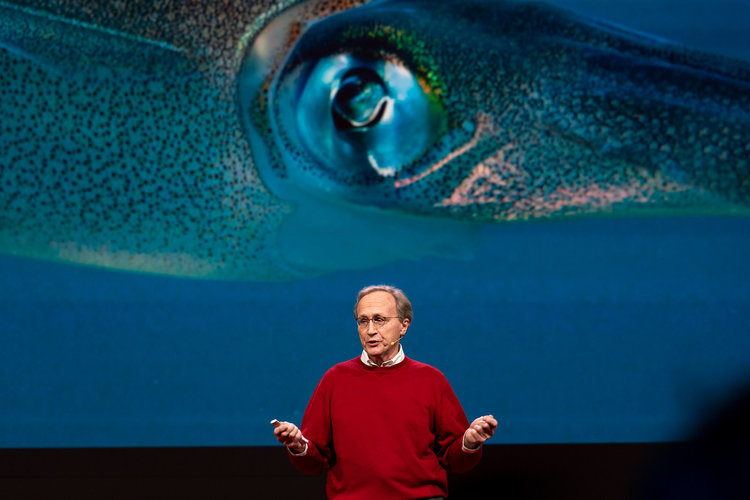 A few years ago, Hanlon gave a talk at Estee Lauder to discuss the implications of his findings. The barrier to creating an octopus-inspired makeup line, he said, is unlocking enough money and electricity to transform the technology into a consumer product.

But the implications of his research go beyond developing consumer items.

Hanlon said he’s often heard from dermatologists and other medical professionals who are interested in recreating cephalopod skin to treat melanoma and vitiligo, a disease that forms blotches lacking in pigmentation.

Cephalopod skin also contains papillae, or muscly structures that act like balloons filled with water. When you apply pressure, they can expand or retract to form different shapes. Hanlon said replicating these structures might help treat acne or scar tissue in the far-off future.

“Whoever can make artificial muscle that acts like animal muscle is going to get a Nobel Prize and be very wealthy,” he joked to Business Insider.

Hanlon said cephalopods are the only animal group on the planet with soft, flexible, morphing skin — a quality that gives them a certain form of “intelligence.”

“Probably the most stunning thing to me — and it took me 40 years to be able to understand — is that nature, through time and trial and error [… has found] super efficient ways to do things,” he told Business Insider. “They’re alien to the human mind, but when you finally figure them out, you just go, ‘Wow.'”