Home » Science » On Venus, Cloudy With a Chance of Microbial Life

It’s been a while — like, forever — since anyone claimed to have discovered life on Venus.

And truth be told, the scientists who announced on Sept. 14 the discovery of phosphine, a gas, in Venus’s atmosphere did not claim to have discovered life, either — only that they could not think of anything that might have produced it other than microbes in the clouds. “We’re not saying we discovered life on Venus,” Sara Seager of the Massachusetts Institute of Technology said in an interview a few days before the announcement.

On Earth, anyway, the only natural source of phosphine is microbes; the gas is often associated with feces. But it would hardly rank as a surprise to find out that scientists don’t know everything there is to know yet about the geochemistry of Venus, our nearest but rarely visited neighbor in the solar system.

Nor would it be the first time that the search for life on another planet has foundered on ignorance of the local chemistry. Experts still argue whether some experiments on the Viking landers in 1977 detected signs of life on Mars, but the main lesson from that adventure was that scientists had tried to run on Mars before learning to walk there: They went looking for Martian biology before they had mastered Martian chemistry.

One of the strengths of science is that interpretations can turn on a dime with the addition of more data. In the case of Venus, opinion has turned and turned again.

In the mythology that served as the narrative backbone of classic science fiction, Venus was often portrayed as a cloudy, swampy rain forest kind of planet — a water world, a plantation world, humid but habitable, in some accounts even inhabited by docile natives. Mars was a dying, desert civilization — a vision promoted in the early 20th century by the Bostonian philanthropist Percival Lowell, who thought he could see canals on Mars.

That was long before either place was actually visited and their inhospitable natures revealed: Venus with its crushing carbon dioxide atmosphere, surface temperature of 800 degrees Fahrenheit and sulfuric acid clouds; Mars with its frozen wisp of an atmosphere. Both of them bone dry, at least on their surfaces.

Venus is the brightest object that most people will see in the sky, after the sun, the moon and the infrequent supernova. It is also the celestial object most likely to be mistaken for a U.F.O.

Venus had another pop culture moment in the 1940s. An all-purpose scholar and psychoanalyst named Immanuel Velikovsky, inspired by biblical accounts of such events as the sun standing still in the heavens, proposed that Venus had been spit from Jupiter 3,500 years ago and had careered through the solar system, sideswiping Earth and dosing it with plague viruses from its comet tail, then collided with Mars before settling into its present orbit. Never mind the laws of celestial mechanics.

The publication in 1950 of Velikovsky’s “Worlds in Collision,” a best seller, scandalized astronomers. As it turned out, Velikovsky’s theory made two correct predictions for all the wrong reasons: that Jupiter is a source of radio noise, and that Venus is hot.

By then, the founders of what would be the American space program had already set their minds and hearts on Mars as the likely abode of life, and the ultimate destination. In 1954, Werner von Braun published a long article in Colliers magazine that was a blueprint for a human expedition to the Red Planet. In a particularly perceptive aside, he anticipated that a century would pass before this happened; lately NASA has been discussing the 2030s as a realistic time frame for such a trip.

Carl Sagan, then a doctoral student at the University of Chicago, provided an accurate explanation for Venus’s torrid temperature, in his 1960 Ph.D. thesis. The planet’s crushing carbon dioxide atmosphere had created a runaway greenhouse effect, he concluded. Venus was a lifeless desert, at least on the ground.

Sagan, who died in 1996, was always optimistic about the prospects for life in the universe, championing the search for extraterrestrial intelligence. In 1967, he and Harold Morowitz, a biochemist at Yale, pointed out that conditions in the clouds of Venus seemed more hospitable, with pressures of just one atmosphere and temperatures of about 40 degrees Fahrenheit, depending on where in the clouds you go, conducive to life.

“If small amounts of minerals are stirred up to the clouds from the surface, it is by no means difficult to imagine an indigenous biology in the clouds of Venus,” they wrote in a paper in Nature.

The notion was not particularly popular. “The idea encountered much resistance and some ridicule back then,” said David Grinspoon, a planetary scientist at the Planetary Science Institute in Tucson, Ariz., who has championed the idea for more than 30 years. 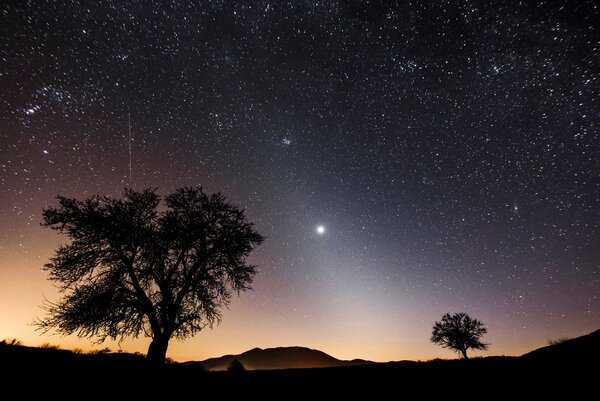 Dr. Grinspoon recalled that when he included a chapter on the plausibility of cloud-based life in his 1997 book, “Venus Revealed,” his publisher pressed him to take it out, contending that such an outlandish notion would tarnish the book. The chapter stayed.

In recent years the discovery of extremophiles, bacteria that live in nuclear reactors, hot ocean vents and other unlikely places, and of exoplanets has spurred new work and ideas about habitable planets. If Mars can have microfossils, why not Venus?

Moreover, Dr. Grinspoon said, new studies of Venus have led to the conclusion that the planet might have lost its oceans rather recently, only 700 million years ago, allowing plenty of time since the formation of the planet for life to have evolved and then escaped to the clouds.

What kind of life would that be? In 2004, Dirk Schulze-Makuch, an astronomer at the Technical University Berlin, in Germany, and his colleagues suggested that microbes floating in the clouds could be coated with a compound called cyclooctasulfur that would act as a sunscreen and convert ultraviolet light into visible wavelengths for photosynthesis.

Earlier this year, Dr. Seager and her colleagues expanded on this idea and sketched out an entire possible life cycle for such organisms. The microbes could inhabit droplets of sulfuric acid in the clouds, they proposed; as the droplets collided and merged, more and more microbes would be enclosed together, metabolize and divide.

Eventually the drops would grow too heavy and rain down from the clouds, but they would evaporate before hitting the ground, causing the microbes to dry out and go dormant.

These spores would be light enough to drift back up to the clouds on currents called gravity waves, where they would serve as seeds for new droplets to condense around, restarting the whole cycle.

“Well, I definitely would not say there’s life on Venus with certainty,” Dr. Seager emphasized. Among other things, she said, biologists still do not know which intestinal microbes produce phosphine or how they do it.

And what sort of life could endure the kinds of conditions in a sulfur cloud? Probably not the DNA-based organisms that we are, Dr. Seager said.

If it were discovered that nature has an alternative way to produce life, that would be the signal event of 21st-century science. And so the race for new data is on. NASA and other space agencies are considering sending new probes to our long-overlooked twin planet. Yuri Milner’s Breakthrough Foundation, known for its $3 million prizes to scientists, has already said that it will finance research into Venusian life.

If you listen carefully, you can hear a new solar system mythology being born. In this narrative, life emerged on Earth, Venus and Mars back when all three worlds were flush with water. When Mars dried out and froze, the microbes went underground, where they wait to be found by our robot rovers. On Venus they took to the air.

On Earth we occupy a plush, naïve middle ground. Walk through the woods on a summer night and the wall of sound from invisible creatures, crickets and peepers, the white noise of life, is overwhelming.

We know how it will end. In a half-billion years or so, as the sun evolves and brightens, Earth will lose its oceans and go the greenhouse way of Venus. But perhaps life in some form will persist even then. That’s quite a lot to hope for, but a little hope is what we need these days.