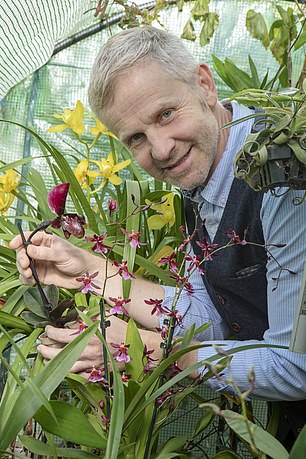 Mark Flowers is passionately, neurotically, radiantly obsessed with orchids. He has filled his Bristol home with them and built a temperature-controlled, artificial cloud forest, polytunnel in his back garden.

Orchid motifs are appliqued on his bedspread and embroidered on an armchair while an enormous ‘orchidarium’ (a sort of aquarium for orchids which keeps them warm and humid) dominates his bedroom.

He chats to his orchids, worries about them, dreams about them and posts photos of their tangled, spidery roots online for fellow enthusiasts to enjoy.

It goes without saying, that Mark, 51, (an award-winning nature documentary maker) has an awful lot to say about the 20,000-plus species of orchids that grow everywhere on Earth except the North and South poles.

He tells me how unpredictable and diva-ish some are; how they ‘look’ at us with their eyeless faces so orchid keepers feel they’re constantly being watched and how clever they are at adapting to their environment.

‘Orchids are the closest you’ll get to sentient plants — they have presence, characters, personalities and sometimes they sulk!’ he says.

He also explains that, while many orchids are ‘very good and straightforward’, others are ‘dishonest and naughty and dark’.

For example, the bee orchid, Ophrys apifera, is so-named because it fools bees into attempting to have sex with it rather than going to the effort of producing its own nectar, as most other flowers do.

Just before the key moment, the bee realises it’s being conned and buzzes off to try its luck elsewhere.

‘Bees will only ever be fooled twice, but it’s enough to pollinate the next orchid,’ says Mark gleefully. 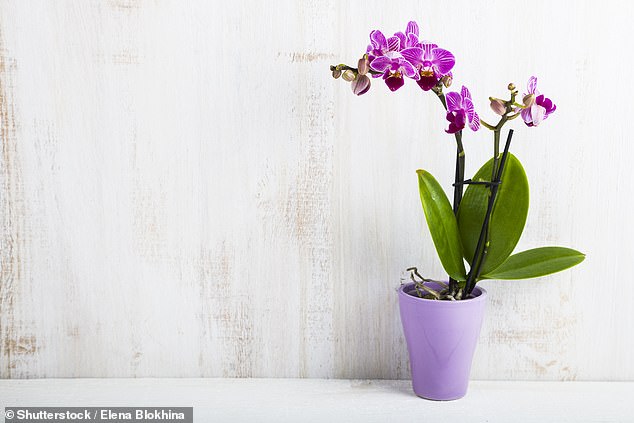 He has filled his Bristol home with them and built a temperature-controlled, artificial cloud forest, polytunnel in his back garden

Orchids are Britain’s favourite pot plant — ahead of cacti, begonias and African violets. The most common are Phalaenopsis (which means moth-like) — sold for as little as a fiver in supermarkets and bred mostly in Holland in labs.

‘They’re mostly clones,’ explains Mark. That means they are unlike other species — such as tropical slipper orchids, Paphiopedilums, kite orchids and the fabulous Draculas.

There has always been something a bit ‘other-worldly’ about orchids. Perhaps it’s their long, snaking roots; their blank waxy faces, the flagrant sexiness of some species (the petals of many resemble women’s sexual organs) and the sauciness of some of the names (naked man orchid).

Even ‘orchid’ comes from the Greek word ‘orkhis’, meaning testicle, thanks to the paired tubers which look rather too much like male parts.

Myths about their powers have long been rife. The Ancient Greeks believed holding an orchid root could promote lust, and eating the larger, lower tuber promoted conception of sons.

For centuries they have driven botanists, explorers and collectors crazy with their elusive allure.

In the 18th century, as the New World opened up and tales of the outlandish beauty and rarity of exotic orchids spread, they became the rich man’s obsession.

But it was largely in vain. Most died on the voyage back and plenty more perished in the dry heat of Britain’s orangeries. ‘Many come from cloud forests — beautiful moist, elfin, dripping worlds — high in the mountains,’ says Mark. ‘They don’t like the heat.’ They also hate draughts, tap water, too much direct sunlight, extreme dark and having soggy bottoms. ‘Never ever leave an orchid sitting in water!’ implores Mark.

None of these tips was understood by our ancestors so the plants remained rare and prices rocketed until, at the height of orchidmania, one orchid could cost the same as a Georgian townhouse in Chelsea. The record paid in Victorian times for two Odontoglossum crispum ‘Cooksonia’, was 650 guineas (the equivalent of £298,000 today).

Now — largely thanks to breeding techniques developed in the Nineties — they are more popular than ever.

Mark, meanwhile, has loved orchids since he was 11, poring over his copy of Orchids For Everyone, which he still treasures.

‘I wasn’t a sporty lad,’ he says. ‘My surname, Flowers, didn’t help, either!’ While his North Yorkshire childhood friends played rugby and cricket, he entered pressed-flower contests, tended dozens of plants on every surface of his bedroom and begged his parents to drive him to specialist garden centres to track down rare plants.

He dreamt of working with Sir David Attenborough. ‘He was my hero ever since I watched Life On Earth — he even bought the moss alive!’ he says.

So, after a brief career as a parrot-sexer (yes, really — his job was to analyse their chromosomal make-up) and as a researcher on a gardening magazine (‘I only got the job because I answered a question about the cymbidium orchid correctly’), he joined the BBC.

Ever since, he’s worked with the Corporation, making nature documentaries with his now-friend Sir David. (He recently helped film Earth’s Great Rivers for BBC2, along the Amazon — where he spent his spare time looking for orchids, naturally.)

Over the years, his orchid collection grew. Many orchids live longer than humans.

‘They keep you on a knife edge,’ says Mark. ‘You can never relax. You can spend decades growing an orchid only for it to die without warning. Or suddenly perform and flower, but never again.’

Different species have different tastes. Brassovolas must be grown upside down.

Pansy orchids Miltoniopsis need clean, soft water — ‘all it takes is one mis-timed water and the roots will fall off!’ he says.

Mark recalls a blue vanda that he had to shower with every day! ‘They’re like old ladies — they need everything just so.’

Many orchids are air plants, so watering should be light, weekly ideally, with rainwater and only when the roots are white, rather than green. Then there are aphids, mealy bugs and slugs . . .‘Once a slug’s munched a shoot, the orchid’s permanently scarred,’ says Mark.

While he gives plants to friends — Sir David got one — there’s a black market for rare ones, which are frequently stolen. A single wild Slipper of Venus growing at a secret location in Yorkshire has to be guarded by wardens.

Meanwhile, in Mark’s polytunnel, fitted with an electric fan, heater and thermometer, he introduces me to his collection and explains that enthusiasts are often more excited about roots and shoots than the flowers.

So, while some are amazing — his Prosthechea Chondylobulbon has a heady honey scent that fills the house — most are an unimpressive-looking collection of shrivelled king shoots, spindly sticks and a few floppy leaves.

‘It might take 15 years to reach flowering size, and after that it may only flower every five years, or so,’ he explains.

Very occasionally, even Mark, the most gentle and patient man you could imagine, loses his cool.

Living with an obsessive must occasionally be tough.

A tactful Mark admits: ‘My interests have overrun the house.’

Among his greatest triumphs have been a red South American slipper orchid he nurtured for 30 years until one day, it flowered for the first time. ‘It had more than 20 flowers! It was amazing, like a Christmas tree!’ he says, dreamy at the memory.

Sadly it was also his biggest tragedy. One night, still in flower, it got a bacterial rot and fell apart. ‘I was gutted. I’d had a long relationship with it,’ he says.

‘They’re the femme fatales of the floral world. People love them too much, covet them and go a bit mad,’ he says.