A 19th Century selfie: Photo taken 136 YEARS AGO shows engineer posing candidly in front of an abbey after rushing over from the camera

One of the earliest selfies ever taken has gone on display in a British museum – 130 years after it was snapped by an avant-garde inventor.

The black and white photo was taken by 19th century engineer Washington Teasdale in front of a ruined abbey in 1883.

Teasdale appears to have set his camera up pointing at the ruins then hot-footed it to a bench just in time to be included in the picture.

The fascinating piece of history represents one of the earliest examples of someone both taking and appearing in a photo. 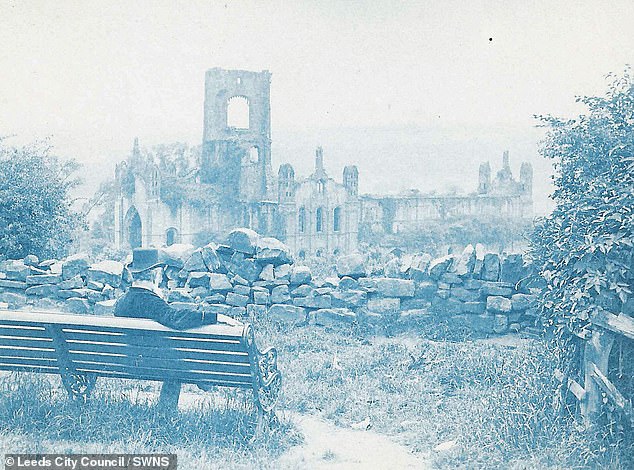 Today it has gone on display at Leeds Industrial Museum, only two miles from Kirkstall Abbey, where the photo was taken.

Curator Chris Sharp said: ‘Washington Teasdale had a truly remarkable mind and seemed capable of reaching astonishing heights of inventiveness and ingenuity in whatever field he brought his prodigious intellect to bear on.

‘Despite his many notable accomplishments he is also far from a household name.

Born in Leeds, Teasdale trained as an engineer and worked in India on the railways before moving back to Britain and pursuing his love of photography.

He was a founding member of the Leeds Photographic Society, the Royal Society of Microscopy and was a Fellow of the Royal Astronomical Society. 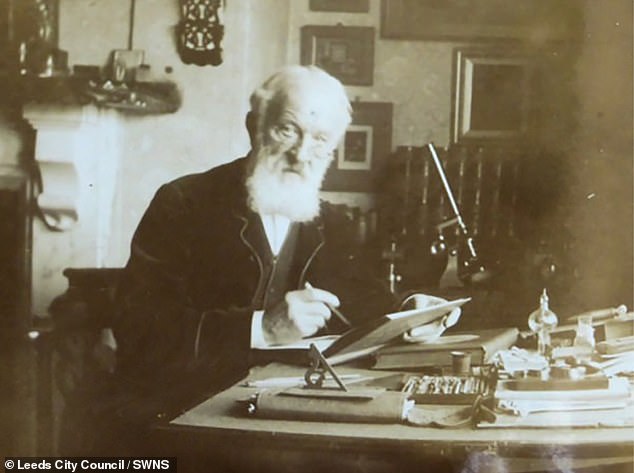 Washington Teasdale. One of the earliest selfies ever taken has gone on display in a British museum – 130 years after it was snapped by an avant-garde inventor

He used it to study insects and capture detailed images of the moon through a telescope.

Teasdale died in 1903 at the age of 73 while attending a meeting of the British Association for the Advancement of Science.

The first photographs were developed by French inventor Nicéphore Niépce who in 1824 creates the first permanent photograph.

However the word photography was only first used in 1839 by Sir John Herschel after he created the first glass negative.

The first ever selfie, which is a ‘photograph taken by oneself’, is considered to have been taken by American pioneer Robert Cornelius in 1839.

Modern selfie culture emerged in Japan in the 1990s and has exploded within the past 15 years with the dawn of social media.

Teasdale’s example is part of a new exhibition at Leeds Industrial Museum telling the illustrious history of engineering in the West Yorkshire city.

Councillor Judith Blake, leader of Leeds City Council, said: ‘Leeds has a very long and proud history as a centre of innovation and progress stretching back hundreds of years.

‘The pioneers who feature in this exhibition are among those who helped blaze a trail in a myriad of fields and industries, inspiring generations of scientists and engineers to follow in their footsteps and play their part in building the city we know today.’

ANOTHER CONTENDER FOR THE EARLIEST SELFIE…

A self-portrait taken by pioneering photographer Oscar Rjelander – believed to be the world’s first selfie – was sold at auction for £70,000 in 2014.

The important photograph, which dates from the 1850s, predates the modern craze by almost 200 years.

It was discovered in a leather-bound book of 70 albumen prints by the renowned Swedish artist. 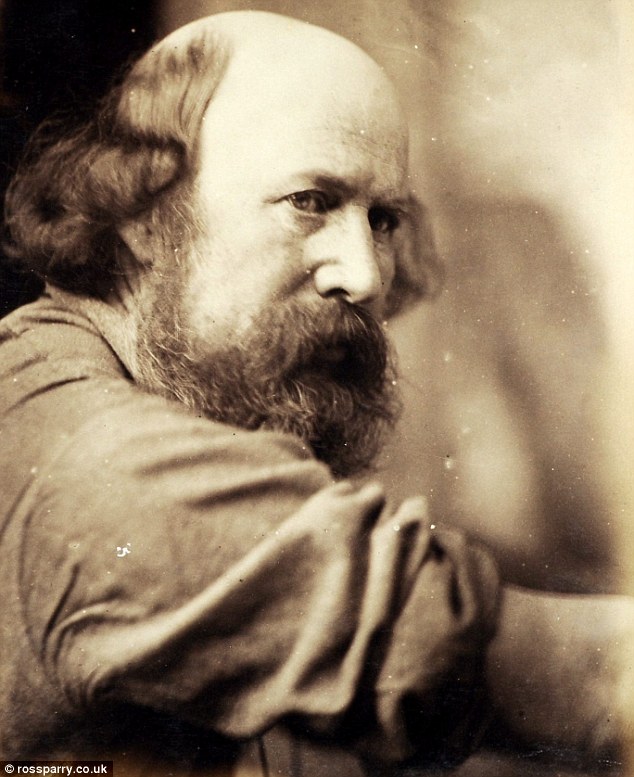 When the owner approached Morphets auctioneers in Harrogate, North Yorkshire, they said they had no idea of the real value of the book.

Liz Pepper Darling of Morphets said:  ‘The vendor brought the album into the office, and asked for it to be sold with a reserve of £100.

‘We quickly realised it was quite an important album of early photographs, when the art was really in its infancy.’

Among the sitters in the album are Rejlander’s wife, Hallam Tennyson – the son of poet Lord Alfred Tennyson, and Rejlander himself.

Rejlander, who started out as a portrait painter before moving into photography, became well known for his photomontage print ‘The Two Ways of Life’- made up of 32 negatives – which caused a scandal because of the partially nude subjects, although respectability came again when Queen Victoria bought a copy of the print for Prince Albert.

Rejlander sold the album of 70 prints to 19th century naval hydrographer Captain George Browing, and it was passed down through the family to most recent owner, who the auctioneers said had no inkling of its significance.

Although individual prints have come to market in the past, the album is thought to be the first work by Rjelander ever sold in public. 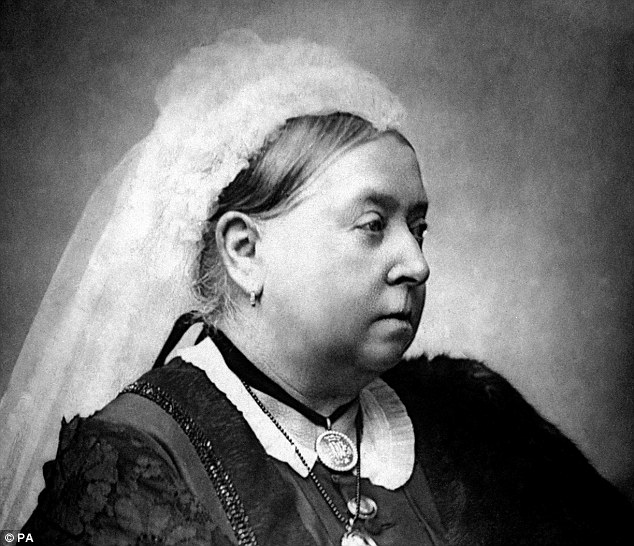