Forget the sunset, watch the Earthset! NASA’s Orion captures a stunning photo of Earth ‘setting’ as the spacecraft passes the moon – more than 50 YEARS after Apollo 8’s iconic ‘Earthrise’ snap

When the crew of Apollo 8 rounded the moon in 1968, Bill Anders snapped an iconic image that would change humanity’s perception of our world forever.

Known as ‘Earthrise’, it captures the planet’s tender blue colour as it floats against the backdrop of the eternal night of space.

More than half a century has now past since that image was taken and with the dawn of a new NASA space program comes a slight variation on Anders’ snap.

It was caught on camera by the US space agency’s Orion spacecraft, which is currently orbiting the moon as part of the Artemis I mission, and has been titled ‘Earthset’.

‘Orion captured this shot of Earth “setting” while the spacecraft passed close to the moon,’ NASA tweeted.

‘Nearly 270,000 miles (430,000 km) away, #Artemis I will soon surpass Apollo 13’s record-setting distance from Earth in a spacecraft designed to carry astronauts.’

The stunning image shows the small blue marble of Earth slipping behind the moon in the foreground, with part of the Orion spacecraft also visible.

It was taken after the uncrewed capsule reached the moon yesterday and flew within 81 miles of the lunar surface as it headed into the next stage of its journey. 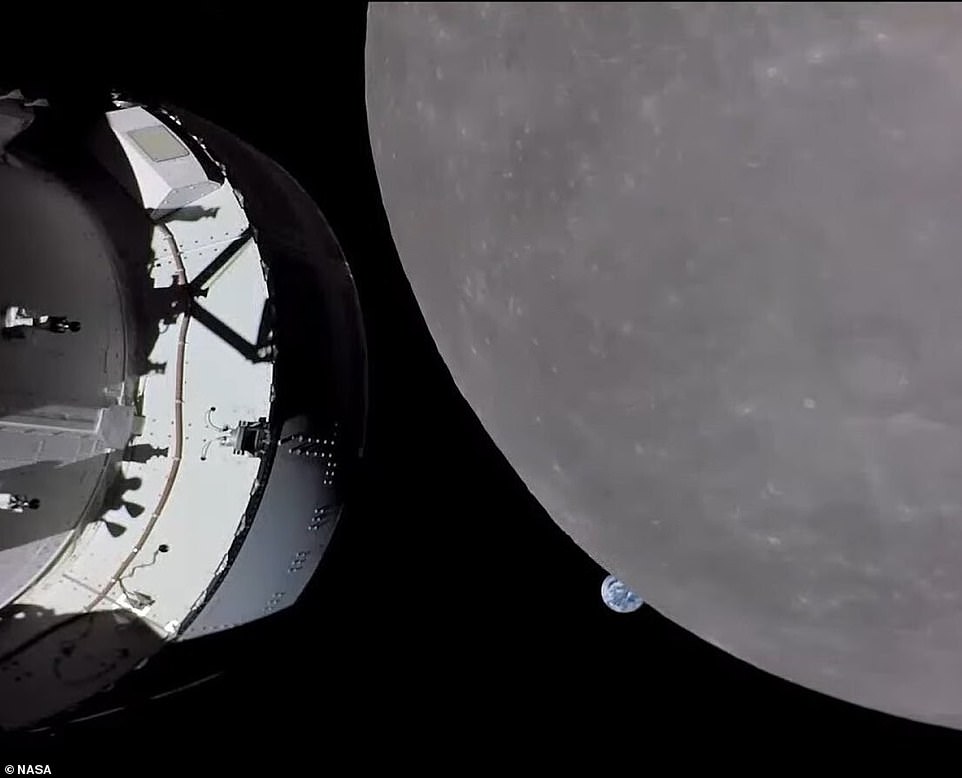 It’s Earthset! NASA’s Orion spacecraft, which is currently orbiting the moon as part of the Artemis I mission, has snapped an stunning image of the Earth which the US space agency has dubbed ‘Earthset’

New view: In 1968, Apollo 8 astronaut Bill Anders snapped an iconic image that would change humanity’s perception of our world forever. Known as ‘Earthrise’, it captures the planet’s tender blue colour as it floats against the backdrop of the eternal night of space 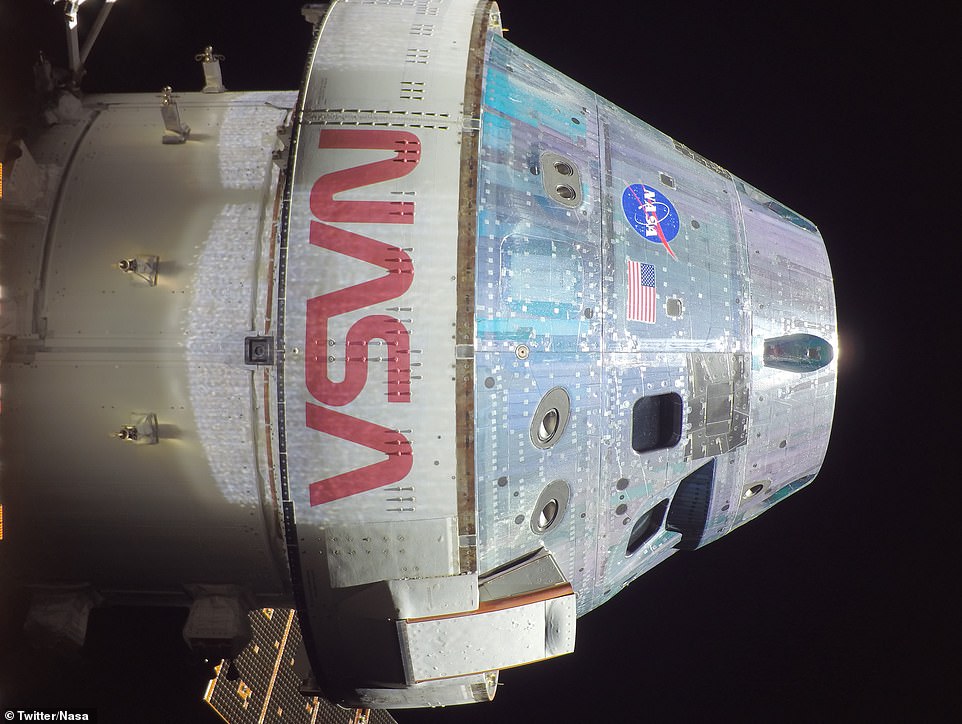 A celestial selfie! NASA’s Orion spacecraft snapped a photo of itself as it prepared to pass behind the moon yesterday

‘Earthrise’ is a symbol of one of history’s greatest explorations – when humans first travelled to another world and, when looking back, saw their home planet.

The iconic image was captured by Apollo 8 astronaut Bill Anders on Christmas Eve 1968.

‘Oh my God! Look at that picture over there!’ exclaimed Anders as the Earth came up over the horizon.

‘There’s the Earth comin’ up. Wow, is that pretty!’

What followed was an impromptu photo opportunity, first in black and white and then after quickly locating the proper film cartridge, in stunning full colour.

‘In lunar orbit, it occurred to me that, here we are, all the way up there at the moon, and we’re studying this thing, and it’s really the Earth as seen from the moon that’s the most interesting aspect of this flight,’ Anders told author Andrew Chaikin for the 2009 book Voices from the Moon.

His photo of the gibbous Earth hanging over the lunar surface was declared one of the ‘great images of the 20th century’ and among ‘100 photographs that changed the world’ as selected by the editors of TIME and LIFE magazines.

Artemis I’s goal is to demonstrate Orion’s systems in a spaceflight environment and ensure a safe re-entry, descent, splashdown, and recovery prior to the first flight with humans on board on Artemis II.

If both of those missions are successful then the first woman and first person of colour will walk on the moon in 2025.

Earthrise was captured on Christmas Eve 1968 as Apollo 8 crew members Frank Borman, Jim Lovell and Bill Anders were orbiting the moon and shooting photographs of the lunar surface.

Anders snapped the iconic Earthrise photo during the crew’s fourth orbit of the moon, frantically switching from black-and-white to color film to capture the planet’s exquisite, fragile beauty.

‘Oh my God, look at that picture over there!’ Anders said. ‘There’s the Earth coming up. Wow, is that pretty!’

Before the flight, no one had thought about photographing Earth, according to Anders.

The astronauts were under orders to get pictures for potential lunar landing sites while orbiting 70 miles (112km) above the moon.

‘We came to explore the moon and what we discovered was the Earth,’ Anders is fond of saying.

It wasn’t until after the astronauts were back that the significance of their Earth pictures sank in.

That first voyage by humans to another world set the stage for the still grander Apollo 11 moon landing seven months later.

There was unprecedented and unfathomable risk to putting three men atop a monstrous new rocket for the first time and sending them all the way to the moon.

The mission was whipped together in just four months in order to reach the moon by year’s end, before the Soviet Union.

Humans had never set eyes on the far side of the moon, or on our planet as a cosmic oasis, surrounded completely by the black void of space.

A half-century later, just 24 US astronauts who flew to the moon have witnessed the wondrous sight in person.

Artemis I marks the first time a capsule built for humans has visited the moon since the Apollo missions 50 years ago.

In four days’ time, a thrust from Orion’s engines will place the spacecraft in a distant retrograde orbit around the moon.

It will remain in this orbit for about a week to test spacecraft systems, about 40,000 miles (64,000 km) above the lunar surface.

Orion will then begin the journey back to Earth, with a landing in the Pacific Ocean scheduled for December 11, after 25 days of flight.

As well as this image of the moon, Orion has also snapped a selfie as well as stunning ‘blue marble’ image of Earth during its epic journey.

The public can track Orion during its mission around the moon and back in real-time, using NASA’s interactive online tool.

The mission is designed to show that the SLS and Orion capsule are ready to carry astronauts to the moon in subsequent Artemis II and Artemis III missions.

What was the Apollo program and who are the astronauts who have been lucky enough to go to the moon? 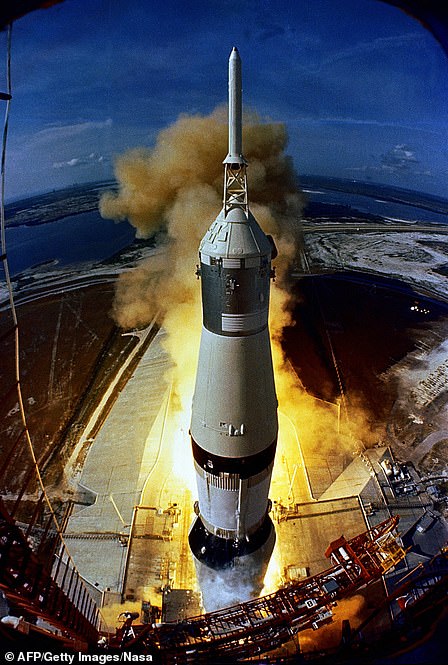 Apollo was the NASA programme that launched in 1961 and got the first man on the moon eight years later.

The first four flights tested the equipment for the Apollo Program and six of the other seven flights managed to land on the moon.

The first manned mission to the moon was Apollo 8 which circled around it on Christmas Eve in 1968 but did not land.

The crew of Apollo 9 spent ten days orbiting Earth and completed the first manned flight of the lunar module – the section of the Apollo rocket that would later land Neil Armstrong on the Moon.

Armstrong and Aldrin walked on the lunar surface while Michael Collins remained in orbit around the moon.

When Armstrong became the first person to walk on the moon, he said, ‘That’s one small step for (a) man; one giant leap for mankind.’

Apollo 12 landed later that year on 19 November on the Ocean of Storms, writes NASA .

Apollo 13 was to be the third mission to land on the moon, but just under 56 hours into flight, an oxygen tank explosion forced the crew to cancel the lunar landing and move into the Aquarius lunar module to return back to Earth.

Apollo 15 was the ninth manned lunar mission in the Apollo space program, and considered at the time the most successful manned space flight up to that moment because of its long duration and greater emphasis on scientific exploration than had been possible on previous missions.

The last Apollo moon landing happened in 1972 after a total of 12 astronauts had touched down on the lunar surface. 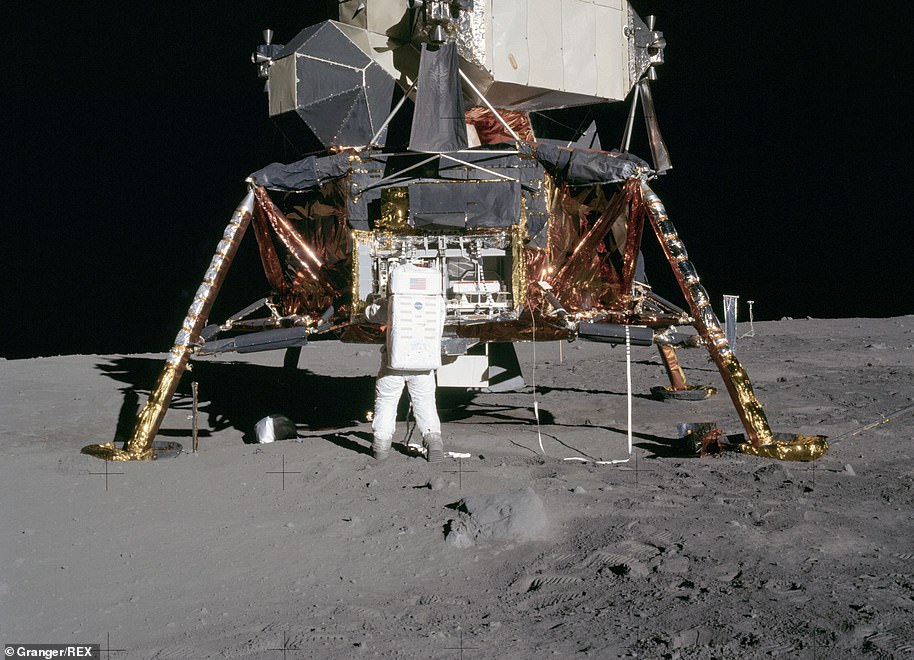 Astronaut Edwin ‘Buzz’ Aldrin unpacking experiments from the Lunar Module on the moon during the Apollo 11 mission. Photographed by Neil Armstrong, 20 July 1969

Who has been to the moon?

Edwin ‘Buzz’ Aldrin followed Neil Armstrong on to the surface of the moon. His popular nickname gave itself to the animated characte Buzz Lightyear.

All the men who have been to the moon

Alan Shepard and Edgar Mitchell who were part of the Apollo 14 mission. They launched on January 31, 1971, and landed in the Fra Mauro region of the moon, the original destination for Apollo 13.

Before he left the moon, Cernan scratched the initials of his daughter Tracy into the lunar regolith. Since the moon does not experience weather conditions like wind or rain to erode anything away, her initials should stay there for a very long time.